What do these “monuments” say about our history? 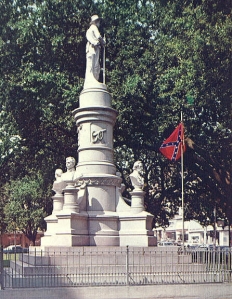 Caddo Parish “monument”: The Confederate Battle Flag was removed in 2011

Last Thursday, I shared a guest post by Jennifer Morrison where she spoke about her own experiences last month at Festival Internationle when a white woman began speaking with her about the statue of Confederate General Alfred Mouton that stands on the corner of Jefferson Street and Lee Avenue in Lafayette, LA. Her interaction with the woman comes at a time when the city of New Orleans has removed “monuments” (I use this term in quotes because to me a monument calls for reverence)  of Confederate soldiers and white supremacy. These debates are going on elsewhere as well, even in Shreveport where debates have been ongoing about the removal of the “monument” that stands outside of the Caddo Parish Courthouse.  (For more on this, read Myles Roberts’ piece on Heliopolis.)

We’ve all heard the old adage, “History is written by the victors.” In the case of the “monuments,” this is not the case. Rather, afraid of losing power created a mythological view of the idyllic, Southern existence before the Civil War and mythologized the valor of its soldiers during the war to protect “states’ rights,” whites erected the statues. Local branches of the United Daughters of the Confederacy erected the sculptures in Lafayette, Shreveport, and New Orleans. Erected after Reconstruction and during Jim Crow, these “monuments,” under the pretense of reverence and remembrance, serve as reminders that the ever watchful eye of those in power will do whatever it takes to maintain that power (i.e. white supremacy).

Throughout his work, the African American author Frank Yerby attacks the myth-making of the South through his novels. Subtly, so as not to agitate his predominantly white, middle class audience, he would subvert the myths of the South while placating to his readership. His 1954 novel Benton’s Row begins in this manner as the narrator describes the arrival of Tom Benton in a community near the Red River in Northwest Louisiana. Running from a hangman’s noose in Texas, Tom enters the community as a man, but after buying land, purchasing slaves, and making a fortune for himself, he dies and begins “to slide back into myth and legend” (1). This “myth and legend” takes on a force of its own, and for all of the questionable things that Tom does, some still view him as a man they should remember with honor.

When news of the impending Civil War starts to hit home, Tom begins to dream of the glory that awaits him when he saves the South:

That these dreams of his were basically adolescent, even puerile, troubled him not at all; because in no way did they make him less than his fellows. The Southern mind was, and sadly, is, basically adolescent, puerile, infantile; the conditions of life under which it developed making it so: geographic isolation, rural living, the economic necessity of defending, of distorting into a virtue a thing totally without virtue, of inventing sophistries, syllogisms to justify the most nearly indefensible system ever invented on the face of the earth. (113-114)

Here, Yerby brings the past of Tom Benton and the present into focus, linking the temporal beliefs together. While he does not explicitly state Jim Crow oppression, Yerby comments that the South was, and is, basically an adolescent whose only hope is through the creation of myths, like Tom Benton, to sustain the position of those in power. The novel deconstructs those myths, especially in the second half, by juxtaposing brave African American soldiers and monogamous couples with cowardly white solders and adulterous couples. (I will talk about this some in the next post.)

Speaking about the removal of the “monuments” New Orleans, mayor Mitch Landrieu laid out the history of the city and its people (Native Americans, immigrants, slaves) when talking about the reasons they should come down. He asks the crowd to think about a young, fifth grade African American girl who must pass those “monuments” everyday and when she asks about the meaning of the statues what would her parents tell her. This is the heart of this discussion. What message do these “monuments” send to that young girl and others? They stand on pedestals and basically say, “You do not belong here. If you choose to stay, I have my eye on you.”

Some argue that the “monuments” represent history, and that is true. But, for me, what this boils down to is a sentence that Landrieu spoke in the middle of his speech: “There is a difference between remembrance of history and reverence of it.” The continued reluctance to see the men and ideas depicted in stone brings to mind that many people revere the “monuments,” and in the process, revere what they stand for as well. We do not need to forget history. We do not need to forget that these “monuments” existed in the spaces where they stood. They tell a story, a tragic story, of our past as a nation, and they do not need to be in the spaces where they reside(d).

We do need monuments that depict and tell the story of those whose voices we have not heard or whose voices have been stifled through years of oppression. There are places that are working towards this: the Whitney Plantation in Louisiana, the National Museum of African American History and Culture, the planned lynching memorial in Alabama. While we do have these sites, there are still more than statutes and “monuments” that represent a sordid past that we continue to live with: places like the Shack Up Inn, Oak Alley, and the White House of the Confederacy.  These sites pay short shrift to the institutions of slavery and sharecropping, instead focusing on the people who owned the land or the lost cause fought from within its rooms.

In conclusion, I was born and raised in Caddo Parish, just like Myles Roberts. As a child and teenager, I did not notice the statue outside of the courthouse even though I was downtown a lot. I also did not notice the discrepancies in housing, arrest rates, and education. As I have gotten older, I now know that Caddo Parish has one of the highest incarceration rates in the country. I know, from experience and looking back, that discrepancies in education were apparent. I also know that housing was, essentially, de facto segregated.

The “monuments” symbolically feed into these physical facts, and while I do not claim that by removing them we will completely remedy the ailments caused by our history, I do think it is a step in the right direction. There is more that we need to do, especially in regards to the ways we remember history and construct our myths and beliefs.

What are your thoughts?  Let me know in the comments below or on Twitter: @silaslapham.

← Guest Post: “This South has no real place for me”
The Smoldering Embers in Our Presence →

4 Comments on “What do these “monuments” say about our history?”