Last week, we remembered December 7, 1941, and that commemoration made me think about the ways that the government used African Americans, during World War II, to boost morale and support the war effort. Two instances of the government’s deployment of African Americans in “propaganda” posters comes to mind: Dorie Miller and Joe Louis. 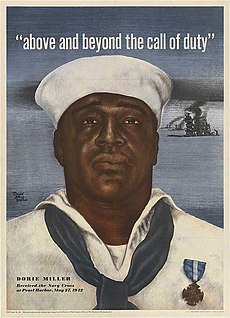 When the Japanese attacked Pearl Harbor, Dorie Miller served as a mess attendant on the USS West Virginia. As the attack commenced, Miller dropped the laundry he was cleaning, rushed on deck, and took command of a machine gun, shooting down two Japanese planes. As well, he rescued a wounded captain. All of this does not sound out of the ordinary for a soldier; however, as an African American, Miller did not receive formal combat training and was relegated to specific duties in the Navy, non of which involved combat. Jennifer James notes that the War Department initially refused to recognize Miller’s heroic deeds until the African American press took up the story. James continues, “In a move both crass and ironic, the War Department then appropriated his name for military propaganda, issuing a poster featuring a drawing of the brawny Miller from the chest up, the slogan, ‘above and beyond the call of duty’ floating loftily above the sailor’s head” (168). When Miller served their purposes, the government chose to provide him with accolades and appropriate him as a symbol of the war effort.

Driving this point home even more, Gwendolyn Brooks’s “Negro Hero/ to suggest Dorie Miller” (1945) highlights the hypocrisy found in the guise of Liberty. The poem opens with Miller blatantly commenting on the fact that he had to break the law in order to save those that he did: “I had to kick their law into their teeth in order to save them” (19). Denied combat training by law, Miller had to deal with the men who refused him any equality. Later, Miller speaks of his love, one that goes against the Liberty he swore to protect: “Their white-gowned democracy was my fair lady,/ With her knife lying cold, straight, in the softness of her/ sweet-flowing sleeve” (20). “Their” democracy, one that Miller strives to maintain, hides something sinister underneath its flowing robes, a knife poised to strike at him if he gets too close. James views this image as the fears that white men harbored regarding the violation of white women by African American men. She says, “If the chaste white female body is a sign of nation, as Brooks’s invocation suggests, any desire on the part of black men to access citizenship becomes an act akin to violation, nothing less than a political rape” (169).

Like Miller, the government also enlisted Joe Louis as a face for its “propaganda” posters. Louis, a world famous boxer, defeated Germany’s Max Schmeling in 1938, a fight that pitted Germany against the USA. When America entered World War II, Louis enlisted and went to Fort Riley, Kansas. There, he trained with future Brooklyn Dodger Jackie Robinson. In fact, it could be argued that Louis provided the spark that allowed Robinson, and other African American soldiers, to become a commissioned officer. When the military rejected a commission for Robinson, Louis refused to do anything to promote the war effort. Even with this pull, though, Louis experienced Jim Crow restrictions at Camp Silbert in Alabama. Waiting for a cab with another boxer in the bus station, Military Police arrested them because the pair were not sitting in the “Colored” section of the terminal.

Despite all of this, the government still used Louis’s image prominently in their war campaign. The poster above shows Louis poised to impale someone or something with his bayonet, and the words “We’re going to do our part. . . and we’ll win because we’re on God’s side” appears at the bottom. Are these words actually Louis’s? Despite all of the subjugation he experiences in Kansas and Alabama, could these words be his? No matter the answer to that question, the words signify a untied front, one where the entire country takes part in fighting for freedom and liberty. Through these displays of Louis and Miller, the government makes them into “disposable” images, ones that serve a “greater” purpose.
Reading Nikky Finney’s “The Battle of and for the Black Face Boy” made me think of these instances even more. Finney’s libretto crosses time and space, tracing the restriction of African Americans throughout our nation’s existence. At two points, she draws upon the image of recruitment posters. While these references specifically zero in on the Civil War, I would argue that they cross time and space to even involve the second Great War. Opening the Civil War, the narrative voice commands, “Step forward nigger! Save your country! The Recruitment poster rings out!” (49) Of course, the irony here is that the country that needs saving does not recognize the African American body; in fact, it takes to calling that body contraband. Later, the voice proclaims, “General Lee paints graffiti on a recruitment poster when no one is looking. Just underneath the black face he writes, whispering as he scrawls, ‘You are now and forever our great disposable!’” (50) The body serves as nothing more than a tool to be used, and once it serves its purpose, it becomes worthless.
In many ways, Finney’s poem highlights what happened with Dorie Miller and Joe Louis during the war. As stated earlier, Miller and Louis become “disposable.” What are your thoughts on this topic? How do the discussions above correlate to DuBois’s call for the Double V Campaign (victory at home and abroad)? Let me know in the comments below.
Brooks, Gwendolyn. “Negro Hero/ to suggest Dorie Miller.” Selected Poems: Gwendolyn Brooks. New York: Harper Perennial, 1963. 19-21.
Finney, Nikky. “The Battle of and for the Black Face Boy.” Oxford American 90 Fall 2015: 44-59.
James, Jennifer C. A Freedom Bought With Blood: African American War Literature from the Civil War to World War II. Chapel Hill: University of North Carolina Press, 2007.