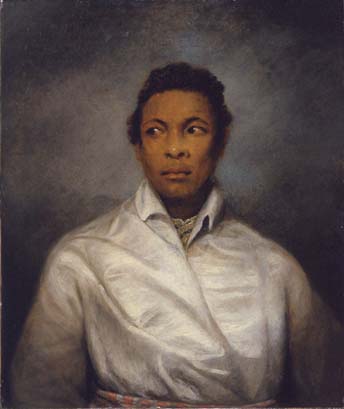 James V. Hatch and Ted Shine’s two-volume Black Theatre USAhas graced my bookshelf for a few years. Occasionally, I pull one of the volumes down to read or reread a play. A couple of weeks ago, I pulled down volume one and read Ira Aldrige‘s translation of Auguste Anicet-Bourgeois’sLe Docteur Noir (1846). Aldridge’s The Black Doctor (1846) contains differences from Anciet-Bourgeois’s original play and other translations. I have not looked at these other texts, so I cannot comment on how Aldridge’s additions or subtractions change the play. However, Keith Byerman has written about these differences in his essay “Creating the Black Hero: Ira Aldridge’s The Black Doctor” in Ira Aldridge, the African Roscius (2007).
Born in New York in 1807, Aldridge attended the African Free School and in 1825, he left the United States for London. Aldridge performed in numerous Shakespearean plays, performing the roles of Othello, Macbeth, Richard III, and King Lear amongst others. He received a level of recognition and fame in England, and later in Europe, that he would never obtain in the Antebellum United States, no matter if he performed in the North or not. Near the ed of his life, in 1867, plans were in motion to have Aldridge tour the United States; however, his death prevented such a tour to take place. For more information on Aldridge, see Bruce Ware Allen’s blog post on the tragedian.
Today, I want to briefly discuss The Black Doctor, a melodrama that tackles the topics of race and class with a European backdrop. Aldridge played Fabian, a “black doctor” who saves the Pauline Reynerie, the daughter of a French aristocrat, from death. After healing Pauline, the two fall in love, and they privately marry, leading to a conflict with Pauline’s mother based on class and race. The plot follows predictable lines of melodrama and romance leading to Fabian’s death by the end of the play.
When I read this play, and think about Fabian, I cannot help but think about the ideas of racial uplift and assimilation that pervaded African American communities during the nineteenth century. Fabian, as an ex-slave who became a doctor, does not socially elevate his social standing with his “respectable” position as a doctor. Even though he saves Pauline, her family does not think that he should hold the same social standing as themselves because of his race and class. The condescending attitude towards Fabian, along with the loss of his love, causes him to go mad while in the Bastille as it comes under siege during the French Revolution.
Fabian’s position, in part, reminds me of Dr. William Miller in Charles W. Chesnutt’s The Marrow of Tradition (1901). Like Fabian, Dr. Miller receives rejection from the white characters in the novel. When Major Carteret’s son chokes, Dr. Price informs the major that Dr. Miller is the best doctor to save the child; however, the major and his wife do not want the African American physician in their house, and Dr. Price performs the procedure to save the Carteret child. At the end of the novel, Mrs. Carteret entreaty Dr. Miller to save her child during the race riot that erupts in the town. Dr. Miller refuses because the Carteret’s refused to recognize his humanity.
While written close to 60 years apart, both Aldridge’s play and Chesnutt’s novel highlight Antebellum and Post Civil War struggles of African Americans and those of African descent around the world who strived to exist on a equal plane with whites. Both texts show, just as the first African American newspaper Freedom’s Journal eventually did, that respectability and morality did not coincide with equality. In many ways, this same though pervades today; however, we still see that individuals base their preconceived notions and perceptions on skin color or nationality. Through reading these texts, we can see where we have been, where we remain, and where we need to eventually go.
Chesnutt’s novel, unlike Aldridge’s play, ends on an ambiguous note. After Dr. Miller refuses to save the Carteret’s son, he begins to leave with his wife Janet (Mrs. Carteret’s mulatto half-sister). After he Dr. Miller catches Mrs. Carteret as she begins to faint, he asks parents, “Is the child still alive?” (195). Responding affirmatively, the novel ends with Evans calling down the stairs, “There’s room enough, but none to spare” (195).With this, the novel concludes. We do not know if Dr. Miller heads up the stairs, and if he does, we do not know if he saves the child. This is where we come in.

When we judge or limit people based on their race, nationality, or class, we hurt them as well as ourselves. How can we claim to live in a society with democratic ideals when we still treat individuals in the same way we did during the eighteenth, nineteenth, and twentieth centuries? Fabian, like Charles Blow’s son, gets ostracized and profiled because of the color of his skin. Dr. Miller, like Kiese Laymon, receives rejection because of the color of his skin. When one asks why we should care about early American literature or African American literature, show them that the experiences these authors went through still exist. The question is, what will we do to flip the script? What will we do to make sure the students in Detroit, MI, receive the respect and education they deserve? What will we do to make sure that Tamir Rice, Michael Brown, Freddy Gray, and countless others do not happen again? What will we do?