Phillis Wheatley’s “To Maecenas” and Subversion

While some critics see Phillis Wheatley as a poet who does not address racism and slavery in her poetry, some, like Frances Smith Foster, read the poet as revising “traditional poetic forms and language to accommodate new messages” and to ultimately present her writing as “a political act” (31). This aspect of Wheatley’s poetry can be seen from the very beginning of Poems on Various Subjects, Religious and Moral (1773) with the opening poem, “To Maecenas.” As a patron of the arts, the ancient Roman Maecenas supported poets such as Virgil and Horace. In the poem, Wheatley thanks her patron for supporting her writing. Vincent Carretta argues that the patron, rather than being John Wheatley or Mather Byles is actually the Countess of Huntington, who Wheatley dedicates the volume.

In some ways, “To Maecenas” reminds me of the poetry of Anne Bradstreet, namely her poems “The Prologue” and “The Author to Her Book.” Bradstreet, in each of these poems, presents herself as inferior to male poets, saying that her “mean” pen cannot compare to the epics of others. Bradstreet does this due to the gender constraints of the mid-1600s in the colonies, not because of her supposed inferiority because of race. Wheatley, on the other hand, has to not only counter preconceived notions surrounding gender but notions of the supposed inferiority of Africans. Thomas Jefferson’s comments on Wheatley in Query XIV in Notes on the State of Virginia (1787) encapsulates this argument. He writes, “Religion, indeed, has produced a Phillis Wheatley; but it could not produce a poet. The compositions published under her name are below the dignity of criticism” (465). 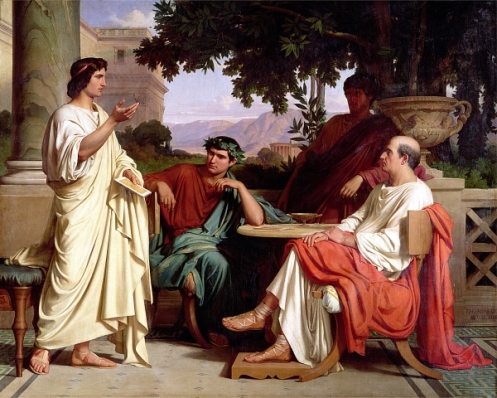 Horace, Virgil, & Varius at the house of Maecenas

Wheatley, just as Bradstreet does with gender, confronts racism and slavery in subtle ways throughout her poetry. In “To Maecenas,” the narrator addresses Maecenas and takes jabs at the institution that keeps Wheatley and others in bondage because of their supposedly inferior intelligence. After commenting on the achievements of Virgil and Homer, Wheatley writes in stanza three,

Great Maro’s strain in heav’nly numbers flows,
The Nine inspire, and all the bosom glows.
O could I rival thine and Virgil’s page,
Or claim the Muses with the Mantuan Sage;
Soon the same beauties should my mind adorn,
And the same arbors in my soul should burn:
Then should my song in bolder notes arise,
And all the numbers pleasingly surprise;
But here I sit, and mourn a grov’ling mind,
That fain would mount, and ride upon the wind. (21-30)

Foster notes that through her appeals to Maecenas, “Wheatley is plainly declaring her desire to be not just a poet, but a great poet” (39). With support and help, she could achieve this; however, the system of racism and slavery would not allow such a thing to happen. Thus, she sits with a “grov’ling mind” that cannot “mount, and ride upon the wind.”

These lines need to be read in relation to the writings of David Walker and the Freedom’s Journal that appeared close to sixty years after Wheatley’s poem. Both Walker and the editors of the Freedom’s Journal, along with others, argued that blacks were not inferior because of some deficiency in their mental capacity; rather, the separation between the artistic and scientific advancement of whites and blacks existed because of the continued oppression that limited or completely denied education to blacks. Thankfully, while Wheatley was enslaved, her owners did educate her, and as John Wheatley notes in the letter that opens Poems on Various Subjects that Phillis, “in sixteen Months Time from her arrival, attained the English language, to which she was an utter stranger before” (7).  All enslaved individuals did not have the same opportunities as Wheatley, and even though she showed her intellect and the Wheatley’s freed her, she died in poverty at 31 years of age, three years before Jefferson’s comments on her writing.

After claiming that the song the Muses grant her will die on her tongue, Wheatley proceeds to draw a lineage from the African poet Terence to herself in stanza five. She writes,

The happier Terence, all the chair inspir’d,
His should replenish’d, and his bosom fir’d;
But say, ye Muses, why this partial grace,
To one alone of Afric’s sable race;
From age to age transmitting thus his name
With the first glory in the rolls of fame?   (37-42)

Here, Wheatley blatantly asks why only one, Terence, should be remembered throughout history for his poetic accomplishments. Wheatley even places her own footnote to show readers that Terence “was an African by birth.” Through her reference to Terence, Wheatley shows that she has a knowledge, before black intellectuals began to look to African history as a way to fight racism in the nineteenth century, of an African intellectual past that should be remembered and celebrated.

Along with this, the entire poem, as Foster points out, challenges white’s views of the intelligence of blacks because she shows them that she knows of, and can read, even if only in translation as John Wheatley notes, the classical artists who exist as part of the poetic pantheon. Foster states, “Phillis Wheatley was, I believe, acutely aware that linguistic facility, artistic impulses, a love and fascination for Latin and the Holy Scriptures were not perceived by the general reading public to be within the scope of black intelligence” (39). “To Maecenas” challenges these presumptions based on race, and Wheatley even calls her audience to reevaluate their own readings of poetic history through her reference to Terence.

Of course, this is not all that can be said about “To Maecenas” or Wheatley’s poems, but I hope it presents you with a way to think about her poetry not as something that lacks protest but as something that, as I would argue with Bradstreet, subtly fights back against the hegemonic status quo of her time period. What are your thoughts? As usual, let me know in the comments below.

2 Comments on “Phillis Wheatley’s “To Maecenas” and Subversion”