The conversation between Meridian Henry and Parnell James at the end of Act I in James Baldwin’s Blues for Mister Charlie, highlights some of the key aspects of the play that I discussed in my last post. Specifically, the conversation addresses issues of privilege, the continued influence of history (no matter how much we wish to deny it), and the ways that coming to the knowledge of reality “would lead, literally, to madness.” Today, I want to briefly look at these aspects in Meridian and Parnell’s conversation. This is by no means exhaustive, but I think it serves well to highlight Baldwin’s comments from his introduction to the play. 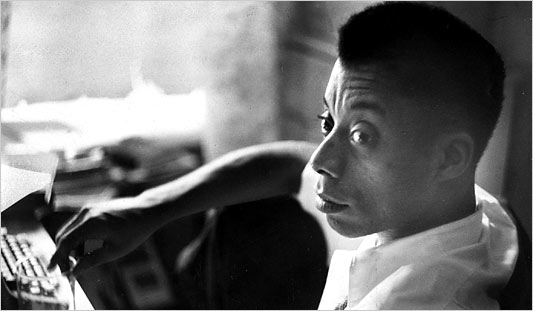 Only Meridian and Parnell remain on stage at the end of Act I. Mother Henry and the students leave, leaving the two men alone in the church. Meridian laments that he should let the people arm, and Parnell counters by saying they would be slaughtered. In response, Meridian launches into a speech about the role of Christianity plays in maintaining power. He speaks about his family’s history, even theoretically tracing it to a time before Christ where Black men, as he says, “didn’t have to take low.”

Meridian then presents a question, “I’ve had to think–would I have been such a Christian if I hadn’t been born black?” Meridian answers his own question by saying, “Maybe I had to become a Christian in order to have any dignity at all. Since I wasn’t a man in men’s eyes, then I could be a man in the eyes of God,” The problem, however, is that Christianity did not provide the humanity that Meridian and others deserve. His wife gets murdered. His son gets murdered. These events cause him to question his position and role in the movement. Rather than preaching nonviolence, he questions whether or not he should preach physical retaliation.

Meridian’s discussion here highlights the ways that white Christianity, at least in regard to the ideas of humility and turning the other cheek, influence and subjugate Meridian and others in the town. Slaveholders used Christianity to control enslaved individuals, constantly citing the Bible saying that slaves should obey their masters. The image of Christ telling his followers to turn the other cheek also appears later. What fails to get mentioned, though, is the righteous anger that arises when we see others being mistreated. Jesus himself got angry, most notably in the temple. However, whites deployed Christianity, as they did with legal fictions, to quell resistance and instill servility. Meridian speaks to this history in his comments, questioning the legitimacy and power of white Christianity.

Parnell becomes shocked and even tells Meridian, “I’ve never seen you like this before. There’s something in your tone I’ve never heard before–rage–maybe hatred–.” This, of course, hearkens back to Meridian and Mother Henry warning Richard of the poison that will lead to hatred. Meridian again draws on history and tells Parnell that he has, indeed, heard this tone before in “all those blues and spirituals and gospel songs you claim to love so much” (emphasis added).  Parnell counters by bringing in history: “I was talking about you–not your history. I have a history, too.” Here, and elsewhere, Parnell appears to be linking his history, from a white male background to that of Meridian. This correlation fails because Parnell’s history and Meridian’s history, while having some of the same events, do not correlate the way that Parnell thinks they do–as equals.

Meridian makes this abundantly clear when he talks to Parnell about the way that the liberal minded newspaper man and the racist sheriff viewed Richard after the murder. Meridian tells his friend,

But both of you have more in common with each other than either of you have with me. And, for both of you–I watched this, I never watched it before–it was just a black boy that was dead, and that was a problem. He saw the problem one way, you saw it another way. But it wasn’t a man that was dead, not my son–you held yourselves away from that!

Even though Parnell presents himself as friend to Meridian’s cause. he views Richard’s death the same way that the sheriff does, a nothing more than a problem. In this manner, he, like the sheriff and Lyle Britten, strip Richard of his humanity, relegating him to nothing more than an indiscriminate mass lying face down in the weeds.

Again, Parnell pushes back, seeking acceptance from Meridian. He asks the preacher to recognize that he sees the pain that Richard’s murder and the racism in Plaguetown incurred upon Meridian and others. At this, Parnell addresses the issue of privilege and coming face-to-face with ones position within a structure a that privileges whiteness. Parnell talks about how hard it is to surrender privilege and he even states that if Meridian were in the same situation he would find it difficult as well. (To me, this is a weak argument from Parnell, but I cannot get into it now.) Parnell concludes by saying, “It’s not a matter of trying to hold on; the things, the privilege–are part of you, are who you are. It’s in the gut.”  Essentially, Parnell claims that the roots of privilege have burrowed so deep into the ground that removing them would become problematic.

Meridian picks up on this and simply asks, “Then where’s the point of this struggle, where’s the hope? If Mister Charlie can’t change–” It is one thing to recognize the privilege within a system and that you are part of it. Parnell does this. However, it is quite another thing to address that privilege and actively seek to dismantle it. If, as Parnell says, “It’s in the gut“; then how do we remove it from the gut? The removal takes more than just a realization of the problem. It takes action.

At this point in the play, Parnell does not see that action. He even asks the question that my students ask every semester: “Why can’t we let the past be the past?” Parnell claims, “We must forget about all–all the past injustice. We have to start from scratch, or do our best to start from scratch. It isn’t vengeance we’re after. Is it?” Can we start from scratch when we don’t recognize the past and our position within systems that have arisen from that past? No. We cannot.

At the end of the play, we see Parnell’s movement towards action. He asks Juanita if he can join in on the march. This question shows Parnell’s desire to act. However, he is not quite there. Juanita makes this clear with the last lines of the play. She tells him, “Well, we can walk in the same direction.” Here, we do not get a clear indication, apart from Parnell just saying he wants to join the march, that Parnell with act to change the system that grants him privilege. There is more that needs to be done before he actually relinquishes his privilege within the system.

What are your thoughts? Let me know either in the comments below or on Twitter at @silaslapham.

Note: I use white Christianity throughout to specify the ways that whites used religion to maintain power over people of color. I am purposefully using white as an adjective to highlight this.

← Poison in James Baldwin’s “Blues for Mister Charlie”
Charles Chesnutt’s “Paul Marchand” and the Social Construction of Race: Part I →