Carson McCullers’s "The Ballad of the Sad Cafe" 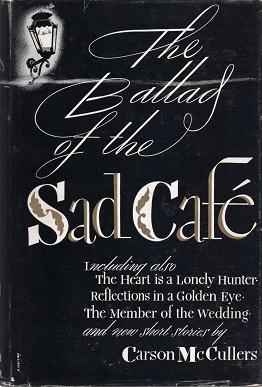 As I read Carson McCuller’s The Ballad of the Sad Cafe, my mind kept going back to Edgar Allan Poe’s short story “Hop-Frog; or, The Eight Chained Orangoutangs.” On the surface, it may not appear that these two stories have much, if anything, in common. However, I would argue that a deeper examination of the stories in relation to another shows that they have some similarities. These similarities arise with the descriptions of Cousin Lymon and Hop-Frog.

While some critics argue that “Hop-Frog” serves as a revenge tale based in reality, others have argued that “Hop-Frog” depicts fears surrounding slave uprisings during the Antebellum period. The latter is the angle I want to examine in correspondence with McCuller’s novella. Hop-Frog’s appearance can be seen as a stereotyped caricature of African Americans. The narrator describes Hop-Frog as a crippled dwarf with a name that the king provided for him. Near the end of the story, he becomes almost grotesque with flashing fangs. The king treats Hop-Frog and his female friend Trippetta negatively, subjugating them to ridicule while at the same time petting and pampering them. The story ends with Hop-Frog and Trippetta exacting revenge on the king and his court by burning them alive. I do not want to go into too much detail with Poe’s story here, but this will serve to lead into a discussion of Lymon in McCullers’s novella.
When Cousin Lymon appears in town, the community views him as different due to to the fact he is a hunchback and under five feet tall. Miss Amelia, however, takes him in and provides him with everything he could ever need. Even when rumors swirl, he remains. Throughout, Lymon, unlike other people in the town, has the ability to speak back to Miss Amelia, something everyone else in the community cannot do. At breakfast one morning, Lymon tells Amelia, “The grits we had this morning were poor” (45). Amelia ignores Lymon and just continues on with her conversation.

Miss Amelia takes Lymon under her wing and protects him, in a somewhat paternalistic manner. Describing their relationship, the narrator says,

He had her confidence in the most delicate and vital matters. He alone knew where she kept the chart that showed where certain barrels of whiskey were buried on a piece of property near-by. He alone had access to her bankbook and the key to the cabinet of curios. He took money from the cash register, whole handfuls of it, and appreciated the loud jingle it made inside his pocket. He owned almost everything on the premises, for when he was cross Miss Amelia would prowl about and find him some present-so that now there was hardly anything left close at hand to give him. (46)

In essence, Lymon can get away with anything around Miss Amelia and she will placate him. He takes care of the cafe, and people come just to see him. Now, the above discussion would not appear to have anything to do with the relationship between whites and blacks in the novella, but I would argue that this discussion underlies the text because of the continual reference to “Negroes” throughout. We can hear the chain gang singing in the distance, on the outskirts of the town, and the novella concludes with twelve mortal men, seven black and five white, singing on the boundaries. The African American presence moves into the town through the character of Cousin Lymon. He has access to Amelia’s life, and he ultimately cleans her out with the help of her ex-husband Marvin Macy. Looking at Lymon, I can not help but think about Uncle Robin from Ishmael Reed’s Flight to Canada too.
Throughout the novel, Lymon takes on the appearance of a submissive African American. The narrator describes him as childish, and he does whatever Amelia and Marvin ask of him. While he obeys their request, he also comes across as subversive. The discussion above shows this. After Marvin and Lymon clean out Amelia’s possessions, they leave town. Rumors begin to swirl that Marvin uses Lymon as a thief who can crawl into houses undetected and rob people blind or that Marvin sold Lymon to a circus side show. The rumors prove false, but the mere mention of Marvin selling Lymon to the circus draws upon the thought that Lymon exists only as a commodity for exploitation in much the same way that Hop-Frog becomes an attraction for the king.
I do not know what to make of all of this right now. Do any of McCullers’s other works exhibit some of the above characteristics? I cannot think of anything from In Reflections of A Golden Eye, but I could be wrong. Let me know what you think in the comments below.