A few months ago, I wrote about Jackie Ormes’ Patty-Jo ‘n’ Ginger single panel gags that appeared in the Pittsburgh Courier. In preparation for a talk I am giving on comics and race, I started looking back at some of these panels and read Nancy Goldstein’s and Deborah Whaley’s discussions of Ormes and her various comic strips and panels. Today, I want to take the time to look at a couple of more panels. While I could focus on her strips Torchy Brown in “Dixie to Harlem” or Torchy Brown in Heartbeats, I find the single panel works intriguing because Ormes conveys multiple meanings with a mere image and the caption she provides.

Writing in the Chicago Defender in 1948, Langston Hughes proclaimed, “If I were marooned on a desert island. . . . I would miss . . . Jackie Ormes’s cute drawings . . .” As Nancy Goldstein notes, Hughes’ comments highlight the purpose of the “funny papers” in the Defender and other papers because “[a]fter scanning headlines that were often distressing, readers could turn to the funnies to savor the conflicts and triumphs depicted by the papers’ black cartoonists, well spiced with irony and sweetened with humor.” This spice of irony with a humor sweetener perfectly embodies Patty-Jo ‘n’ Ginger, a panel that Ormes began for the Courier following World War II.

Amazingly, Goldstein points out that many histories of newspaper cartoons ignore or give short shrift to Patty-Jo ‘n’ Ginger, possibly because they may have overlooked “the cartoon’s polemical commentary” as nothing more than “children’s fare or somehow frivolous in content” because the mouthpiece was “a precocious and witty little girl” talking to “her attractive big sister.” However, this assessment that the panel does not warrant in-depth scrutiny diminishes Ormes’ work and voice. In the panel, Ormes spoke out against the increased militarization of America, segregation, housing discrimination, education, the Montgomery Bus Boycott, and other issues such as environmental pollution. 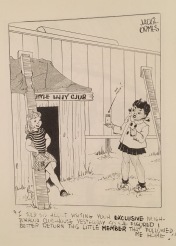 Ormes’ panel for August 31, 1946, shows a well-dressed and groomed Patty-Jo approaching a white girl as she leans against what appears to be a club house. Above the door, we see the words “Little Lilly Club” (misspelled). This wording, of course, should be read as “Little Lilly White Club.” Patty-Jo tells the girl, “I told sis about visiting your exclusive neighborhood clubhouse yesterday so I figured I better return this little member that followed me home.” Patty-Jo carries the “little member” in a jar and holds it in front of her face. An arrow points at the jar and reads, “One louse!”

Patty-Jo, well dressed, contrasts with, what appears to be, the underprivileged white girl who runs the clubhouse. We see this through the girl’s clothing and also through the “little member” that Patty-Jo returns to her. Through the panel, Ormes provides a multi-layered commentary on equality and housing. As a member of the Black middle class, Patty-Jo still exists below the girl who controls the entrance to the clubhouse due to her skin color. The issue of housing discrimination, redlining, gerrymandering district lines, and other forms of keeping neighborhoods “lily white” is nothing new. Look at Lorainne Hansberry’s A Raisin in the Sun and the real-life experiences of her family for a good account. Or, look at the use of district lines to maintain school segregation in Flint, MI, through the 1970s.

Along with these issues, Ormes’ panel also makes me think of the superiority that some feel because of their skin color. It is obvious, from the sign of the clubhouse and the “little member” that Patty-Jo returns, that the white girl does not have an education that matches Patty-Jo’s. This aspect makes me think about other texts such as Octavia Butler’s Kindred where Rufus Weylin feels inferior to Dana because she can read well and he cannot. These same issues come up in other texts as well where the supposedly inferior individual exceeds the supposedly superior individual in literacy and education. 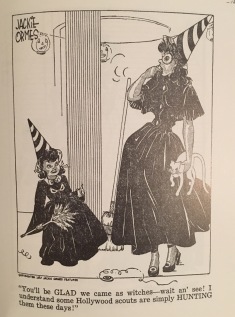 The other panel I want to briefly examine appeared on November 1, 1947. It depicts Patty-Jo and Ginger dressed up as witches for Halloween. Ginger carries a white cat and has her hand to her mouth as Patty-Jo says, “You’ll be GLAD we came as witches—wait an’ se! I understand some Hollywood scouts are simply HUNTING them these days!” The connotation here, of course, calls to mind Joseph McCarthy and the House Un-American Activities Committee which sought to identify communist members or sympathizers and essentially blackball them from whatever business they worked within. Hollywood became a major target, and actors such as Paul Robeson got called before the committee.

Whaley notes that “Ginger’s reaction to Patty-Jo confirms the fearlessness and danger in Patty-Jo’s inadvertent innuendo, and indeed, such signifyin(g) commentary, even in comic form, garnered unsmiling notice from the FBI.” The agency ran a file on Ormes between 1948-1958; however, they may have been watching Ormes earlier. They would track her steps, following her to the bookstore and other places to gather information on her possible connections to the Communist Party. They even interviewed Ormes on several occasions. Eventually, the file totaled 287 pages, 150 more than the file on Jackie Robinson.

As Whaley notes, after the bureau began to interview Ormes, Patty-Jo ‘n’ Ginger began to take a more overtly political tone. Ormes’ panel, far from being merely a frivolous joke told by a preconscious young girl, contained biting commentary and scathing indictments on issues that sought to oppress and keep individuals in subjugation through either racist policies, government witch hunts, military industrialization, or other means. Through Patty-Jo, Ormes highlights the ways that, as Whaley notes, “a young, middle-class, educated Black child in the throes of the civil rights era would express herself.”

We must remember that it is Patty-Jo, not Ginger, that makes the comments in Ormes’ panels. What does her voice, compared to Ginger’s do regarding the message? Does hearing condemnation from a young girl affect the reader’s response?  Does it make the reader identify with the girl, thus invoking sympathy with a child who must endure such discrimination? In the panels where Patty-Jo actively participates in civil rights activities, does it call upon the reader to question what he or she can do to fight racism in the same manner that a young girl does? These are questions that we need to consider when looking at Patty-Jo ‘n’ Ginger.