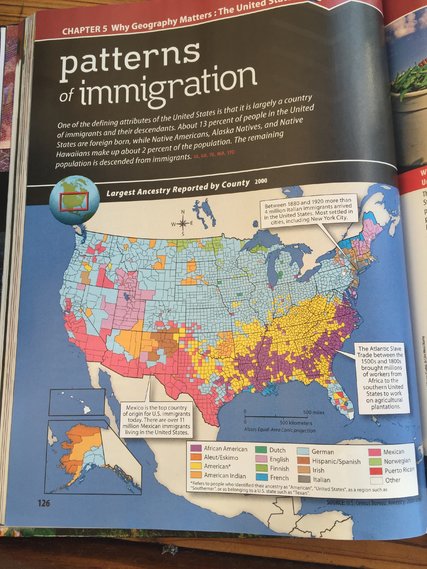 Last October, Roni Dean-Burren posted a photo of a map that appeared in her son’s American History textbook in Texas. The map shows patterns of immigration in the United States. Pointing towards the Carolinas, the caption about the forced immigration of Africans to America where they would become slaves reads as follows: “The Atlantic Slave Trade between the 1500s and 1800s brought millions of workers from Africa to the Southern United States to work on agricultural plantations” (emphasis added). Key here, of course, is the textbook authors’ use of the term “workers” to refer to individuals who arrived on the shores of the United States involuntarily and as the property of landowners throughout the country. While the term does carry some truth, its use here ultimately carries with it the idea that the Africans who migrated here during the Atlantic Slave Trade did so with some form of agency, which is blatantly inaccurate.

I bring this incident up because I recently went back and read Attica Locke’s The Cutting Season (2012) again in preparation for her readings April 5 and April 6 at UL Lafayette and to prepare for the upcoming NEH Summer Institute Ernest J. Gaines and the Southern Experience. I have written about this novel before, specifically in regards to the similarities between it and Ernest J. Gaines’s A Gathering of Old Men (1983). On this read through, I saw even more similarities, but those will have to wait until the next post. Today, I want to briefly touch on how Locke situates the plantation of Belle Vie (Beautiful Life) in relation to written history and actual historical events.
In the novel, Caren Gray, an African American woman, manages the plantation where her ancestors and those who owned her ancestors once lived. She takes care of the property, and as the manager, she books weddings, receptions, tours, and other events. The plantation exists as a historical marker, a place to preserve so that the past will not disappear into the ether. However, whose past gets represented becomes part of the focus of the novel. In many ways, this novel should be considered alongside of T. Geronimo Johnson’s Welcome to Braggsville (2015), another contemporary novel that hinges on the retelling of history through plays and demonstrations.
At the beginning of the novel, Caren makes her way around the grounds, checking up on everything before the plantation opens for the day. As she approaches the slave quarters, she passes a marker that describes the six cabins situated there.

Raised some three feet off of the ground and set just inside the gate to the first cabin, it dated the village to 1852, the year Monsieur and Madame Duquesne bought the land from the Mississippi all the way to the back swamp, christening it Le Belle Vie. The six cabins were all that remained of what was once a THRIVING VILLAGE OF PLANTATION WORKERS. (11)

Here, the marker has the same language as the McGraw-Hill textbook. The narrator, or characters, don’t comment on this language; instead, it just sits on the page in capital letters, screaming at the reader. Caren always feels tense walking through the quarters, knowing the history of the people who lived there, including her own ancestors.
Just as Caren feels overwhelmed by the cabins, other characters do as well. Her former partner Eric, when he approaches the slave cabins for the first time, feels tense as well. Even though he is not from the South, he still encounters apprehension as he stands at the mouth of the quarters because “this face-to-face meeting with one’s own history, the family you never knew you had,” should not be faced alone. Likewise, the African American southeast regional development president of the Groveland Corporation, Ken Wiggams, tours the grounds with four other Groveland employees to decide what they will do with the property. When the group reaches the quarters, the whites go throughout the cabins, reading markers and snapping pictures. Ken, on the other hand, “didn’t even venture into the slave village,” and he stood there with “a bitter, grudging expression” on his face (365). Caren imagines the man’s thoughts as he stands there “viewing himself as two men at once: a president and a descendant of slaves” (365-366).
These feelings towards the quarters undercut the writing on the marker that the people who occupied the six cabins, and those cabins that had disappeared, existed as workers who voluntarily decided to work the land. The past of the South manifests itself as Caren, throughout the novel, struggles to reconcile the beauty of the landscape with the horrors that once occurred there. What is amazing about Locke’s novel is the fact that she does not present slavery; instead, the historical focus center’s in on Caren’s ancestor Jason, a former slave who during Reconstruction found a way to stake a claim to the plantation that once owned him.

In the next post, I will discuss some more ways that The Cutting Season echoes Ernest J. Gaines’s work, specifically in its commentary on history and whose history gets privileged. What are your thoughts on the topic discussed today? What we have here is an overview, so I a curious to know what your thoughts are. As usual, let me know in the comments below.