From the very beginning, Joyce Carol Oates brings music to the forefront of her widely anthologized short story “Where Are You Going, Where Have You Been?” with the dedication that simply reads, “For Bob Dylan” (1003). Other people have written on the ways that Dylan’s “It’s All Over Now, Baby Blue” and “Mr. Tambourine Man” from Bringing It All Back Home (1965) work in relation to the story. Others, such as Tom Quirk, have discussed “The Pied Piper of Tuscon” Charles Schmid and the ways that he inspired Oates to write the story and construct the character Arnold Friend.

I mention these aspects not to rehash what has already been said; instead, I point out these threads to look at how we can use The Blood Brothers’ “The Salesman, Denver Max” (2003) in relation to Dylan’s songs and Schmid’s crimes to help us explore Oates’ story. Today, I want to take the time to look at The Blood Brothers’ song and discuss the ways that it creates, like I would argue Dylan’s songs do, a soundtrack that ebbs and flows with the action that takes place within the story.

Music physically appears throughout Oates’ story in the form of the XYZ Sunday Jamboree and Ellie holding a transistor radio to his ear and elsewhere. At other times, it seeps in as part of the description of Connie’s thoughts and mindset, almost as if within her head a soundtrack plays as she walks through her life. Describing the way that Connie carries herself outside of the house, the narrator describes her walking saying it “could be childish like and bobbing, or languid enough to make you think she was hearing music in her head” (1004). Connie exists within a fantasy of music, movies, magazines, and popular culture that injects her fifteen-year-old head with “idealized” images of “reality.”

“The Salesman, Denver Max” starts out with about fifteen seconds of acoustic guitar with undertones of pads swelling and falling in the background before the vocals arrive, and it takes another thirty five seconds before drums, bass, and a more pounding sound erupts. During these first fifty-two seconds, Denver Max tries to seduce a girl (Connie) outside just like Oates’ story. He tries to sell her an image and convince her that she is, in effect, trapped within her house and that the outside world, as Friend does in the story, holds much more that she can ever imagine. However, the screen door stands between them, keeping him out and her within.

The instrumentation and vocals begin in this way, at points seductive and dreamlike, similar to the way Friend talks. To Connie, he talks in a sing-song manner: “He spoke in a simple lilting voice, exactly as if he were reciting the words to a song” (1009). As well, Connie daydreams about love. When her family leaves for the barbecue, “Connie sat with her eyes closed in the sun, dreaming and dazed with the warmth about her as if this were a kind of love, the caresses of love, and her mind slipped over onto thoughts of the boy she had been with the night before and how nice he had been” (1006). The Blood Brothers’ song creates, through the lyrics and the music, the same types of feelings within the listener.

However, these feelings, as they do in the story, abruptly turn 180 degrees when Denver Max screams at the girl, telling her, “Don’t you try to call the cops little girl/Before you pick up the phone you’ll be dead.”  Of course, this is the same way that Friend talks to Connie. On a sonic level, the lines appear over a driving section that takes the tone out of the seductive and dreamy vibe of the beginning into a violent and aggressive demand that manifests itself through the sounds emanating from the speakers.

When the song returns to the seductive, dreamlike acoustic guitar riff that starts the song, it becomes accompanied by drums and a sliding bass that add a layer of hidden violence that slithers and slides its way underneath the facade that Denver Max wears. Here, Denver Max even comments on the mask that he wears, telling the girl, “My name is Denver Max, please excuse the mas/Running down my face, bound by tacks and paste.” Of course, Charles Schmid reportedly wore a mask or at least a prosthetic, and to Connie, it appears that Friend’s face is nothing more than a mask plastered over his skin. The music during this section plays with that notion through its use of the guitar buttressed by the bass and drums underneath. 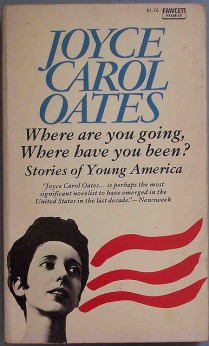 After Denver Max tells the girl not to call the cops and that her parents don’t understand her, the song nears its end with a break down that strips away everything but the bass and the vocals: “By the time we hit Tuscon your parent’s little girl,/Parents little girl will be wondering/Where their pretty blonde has gone.” At the culmination of this section, after Denver Max sees them travelling through Tuscon, Mexico, and jumping into the sea, the entire band jumps back into the mix in a chaotic section that uses staccato punctuation, pick scrapes, and sheer walls of noise to represent the violence taking place.  In the midst of all of this, the vocals come through with “And before you pick up the phone you’ll be dead!” At the end of this line, a growl can be heard as “dead” trails off into oblivion. This growl, on a visceral level, relates Denver Max’s mindset to the listener, highlighting that even though he appears innocent, he is ultimately an evil and violent “salesman.”

Of course, this is not all that can be said. I did not talk about the ways the screen door appears in the song, the confrontations between the girl and her parents and the ways those relate to Connie and her mother, the isolation of the setting, and other aspects. These are all things that students can explore and look at in relation to both Oates’ story and also in relation to Dylan’s songs.

I have written about using this story to help students learn how to research as well. What are your thoughts? As usual, let me know in the comments below, and make sure to follow me on Twitter at @silaslapham.

2 Comments on “The Blood Brothers’ “The Salesman, Denver Max” and Joyce Carol Oates”