Over the past couple of semesters, I have taught Frederick Douglass’ What to the Slave is the Fourth of July? instead of teaching his narrative. I do this for a couple of reasons. One, I assign Solomon Northup’s Twelve Years a Slave, and during discussions about Northup, I bring in Douglass’ narrative and Harriett Jacobs’ Incidents in the Life of a Slave Girl because Northup contains aspects that could relate to both texts. As well, Douglass’ speech provides students with a rhetorical masterpiece that challenges slavery and racism with, at times, even more fiery language than say David Walker or William Apess. This past summer, I wrote about Douglass’ speech and what he has to say about the past. Today, I want to briefly look at how he begins the speech and how his rhetorical positioning relates to the rest of the text.

Douglass delivered his oration in front of the Rochester Ladies’ Anti-slavery Society on July 5, 1852. In the exordium, Douglass spends the first three paragraphs claiming others, with stronger nerves and better oratorical skills, should be up on stage instead of him. He opens by stating, “He who could address this audience without a quailing sensation, has stronger nerves than I.” He continues by stating that a “quite unfavorable” feeling has enveloped him because of his “limited powers of speech.”

In the third paragraph, Douglass continues to express his inability to address such a crowd on the subject of slavery and racism. He establishes his credibility on the subject at the beginning of the third paragraph, and in the midst of establishing himself as a former slave who is out of his element on stage in front of the Rochester ladies’ Anti-slavery Society. He tells his audience, “The fact is . . . the distance between this platform and the slave plantation, from which I escaped, is considerable–and the difficulties to be overcome in getting from the latter to the former are by no means slight.” Here, Douglass tells his listeners that the space, and I would infer “intellectual” space separating the plantation from the stage where he stands, is far too great, so he warns those listening to not expect much from him.

Douglass concludes the paragraph with two sentences where he feigns an inability to speak adequately on the subject at hand:

You will not, therefore, be surprised, if in what I have to say I evince no elaborate preparation, nor grace my speech with any high sounding exordium. With little experience and with less learning, I have been able to throw my thoughts hastily and imperfectly together; and trusting to your patient and generous indulgence, I will proceed to lay them before you.

Within these two sentences, Douglass claims “no elaborate preparation,” that he has “less learning” than his listeners, and that he has “hastily and imperfectly” constructed his thoughts for the speech. These claims, of course, ring false. I cannot comment on Douglass’ preparation before the speech, but immediately following the third paragraph, Douglass launches into the meat of his speech with ferocity and eloquence that the audience has to question his claims that he is ill prepared to deliver such an oration.

Douglass’ supposed inability to speak adequately about the institution of slavery works to dismantle his audience’s preconceived notions of Douglass himself. Even though he delivered the speech in front of an anti-slavery society, I cannot help but think that some in the audience possibly viewed him as someone who possessed limited intelligence based on their notions of the differences between Blacks and Whites. I say this because William Apess experienced the same thing when spoke on the same stage with Elias Boudinot and an audience member claimed that they expected Boudinot to be more “savage,” but they were surprised he was “civilized.” Apess, on the other hand, adhered to their preconceived notions. 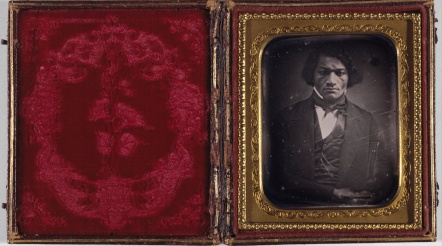 Douglass’ rhetorical maneuver at the beginning of the oration can be seen in relation to the ways he thought about photography as well. Throughout the nineteenth century, Frederick Douglass was the most photographed person in America. There are 160 photographs of Douglass, surpassing the second most photographed American, Abraham Lincoln, by 34. Through photographs, “Douglass emerged the new Negro: self-possessed and unafraid. There were other photos of black people at the time, but they reinforced ideas of subservience such as the cowed and broken slave, his back a mass of scars from the lick of an overseer’s whip.”

This is what Douglass attempts to do in the exordium as well. Immediately following his humble introduction, he launches into a damning indictment on the false equality that exists within American society by positioning himself and other African Americans as separate from White Americans. He does this by claiming that the Fourth of July is “your National Independence” not “mine.” Along with this move, Douglass deploys numerous rhetorical devices such as anaphora, parallelism, and more to drive his points home. These techniques are not the repertoire of an under-prepared, unskilled speaker.

If these aspects were not enough to convince his audience that he was, in fact, completely capable of giving the speech and speaking on the subject with authority, Douglass again deploys a metaphor of space at the end. In the penultimate paragraph, he collapses the space between the plantation and the lectern by highlighting the ability to communicate and travel across the Atlantic with ease:

Knowledge was then confined and enjoyed by the privileged few, and the multitude walked on in mental darkness. But a change has now come over the affairs of mankind. Walled cities and empires have become unfashionable. The arm of commerce has borne away the gates of the strong city. Intelligence is penetrating the darkest corners of the globe. It makes its pathway over and under the sea, as well as on the earth. Wind, steam, and lightning are its chartered agents. Oceans no longer divide, but link nations together. From Boston to London is now a holiday excursion. Space is comparatively annihilated. Thoughts expressed on one side of the Atlantic, are distinctly heard on the other.

While knowledge used to be “confined and enjoyed by a privileged few,” the consolidation of space allows for “intelligence” to weave its way throughout the world, not limiting itself to the “privileged few.” Douglass stands before the Rochester ladies’ Anti-slavery Society as the embodiment of this argument, and by placing these metaphors of spatial distance at the beginning then at the end, he challenges his audience to actually question their own notions of his intelligence or lack thereof that they had upon entering the lecture hall. In this manner, he does not just condemn slavery, but he also confronts those before him who espouse freedom and equality but still harbor stereotypes and perceptions that place him below themselves.

In conclusion, this whole discussion makes me think about Douglass’ Narrative as well.  There, William Lloyd Garrison and Wendell Philips provide the authenticating documents at the beginning of Douglass’ text. Garrison begins the “Preface” by stating, ” In the month of August, 1841, I attended an anti-slavery convention in Nantucket, at which it was my happiness to becomes acquainted with Frederick Douglass, he writer of the following Narrative.” Garrison goes on to discuss how he heard Douglass speak at the convention and was moved by his story. The opening documents by Garrison and Philips are typical in slave narratives. They work to establish authenticity of the narrative.

What is interesting, though, in Douglass’ first narrative is that he concludes the text at the same teleological spot that Garrison introduces it, at the anti-slavery convention. He ends the Narrative proper by stating, “But, while attending an anti-slavery convention at Nantucket, on the 11th of August, 1841, I felt strongly moved to speak, and was, at the same time much urged to do so by Mr. William C. Coffin.” At the beginning of the text, Garrison serves as the authenticating voice, but at the end, Douglass speaks with his own voice, challenging the stereotypes of readers who relied on Garrison to substantiate the narrative. He does this by ending where Garrison began, at the convention.

Of course, there is much more that could be said. What are your thoughts? Let me know in the comments below. Make sure to follow me on Twitter @silaslapham.