Crazy and unexpected! That is the only way I can truly describe what I experienced when I first started reading Brian K. Vaughan and Fiona Staples’ Saga (2012). On almost every trip to the library to find new books, I would pick up Saga and flip the pages. Time and time again I would put it back on the shelf because it looked, in essence, crazy. There are cats who can tell if you are lying, aristocrats with CRT televisions for heads, characters with horns, characters with wings, planets that are actually eggs. All of this, initially, kept me away from Saga because I am not necessarily a huge science fiction fan. However, once I started reading, I couldn’t put the books down. The story is engrossing, and the connections that arose in my mind as I read the story of Marko and Alana fleeing war with their daughter Hazel keep me going.

Saga tackles issues such as xenophobia, racism, sexism, war, and a myriad of other topics that I cannot dive into here. Instead, I want to focus on one aspect that really stuck out to me, the use of literature as political commentary and protest. Essentially, Saga is a text that provides commentary on a myriad of topics, and in that way it exists in the same vein as Jack Kirby and Stan Lee‘s work, Dwayne McDuffie‘s, Christopher Priest’s, and countless others. To drive the point home that Vaughan and Staples view Saga as a means of commentary and I would even argue instruction, they introduce the character of D. Oswald Heist.

Heist’s book, A Nighttime Smoke, serves as a catalyst for Alana and Marko to seek him out in hopes that he can help them survive as they flee their pursuers. The couple are running because, being from different races, some oppose their union and the child that stems from it, Hazel. Alana is from Landfall and has wings while Marko hails from the moon world Wreath, has horns, and practices magic. For eons, the two worlds have fought a never ending war, and that war has spread to engulf other races and factions that essentially do the fighting for the two main parties.

Marko gets captured, and during his incarceration, Alana becomes his guard. She has read Heist’s book and sees it as a thinly veiled metaphor for the ongoing conflict. She reads sections of the book to Marko while he works, and eventually, she releases him and the two escape together. They have a child together, which causes both armies to pursue them. These discussions about Hazel recall the same debates that surrounding interracial relationships between Blacks and Whites. Some of the same arguments arise throughout the course of Saga. This is something worth looking into further.

The use of literature as a didactic tool or as political commentary is certainly nothing new. Early American authors such as Susanna Rowson wanted their books to teach readers and well as entertain them. Lydia Maria Child and Catharine Maria Sedgwick used their texts to argue against Native American removal. Slave narratives and Harriett Beecher Stowe’s Uncle Tom’s Cabin sought to use literature to end slavery. Mark Twain and William Dean Howells used literature to argue against the Spanish-American War. Debates during the Harlem Renaissance arose between luminaries such as Alaine Locke and Langston Hughes over whether or not art should serve as merely just art or if it should be propaganda. There are, of course, more examples, but you get the point.

Vaughan and Staples call upon readers to encounter the question of whether or not art should stand on its own as merely art or if it should be political commentary through the character of D. Oswald Heist. Prince Robot IV tracks down Heist on the planet of Quietus in hopes of finding Alana, Marko, and Hazel there. Upon entering Heist’s home, Prince Robot asks him if Marko and Alana have been there. The prince then reveals the book, and Heist inquires, “Wait, your’re here for that that piece of shit?” Heist knows what Prince Robot wants, and why, but he plays dumb about his true message contained within the pages of A Nighttime Smoke. 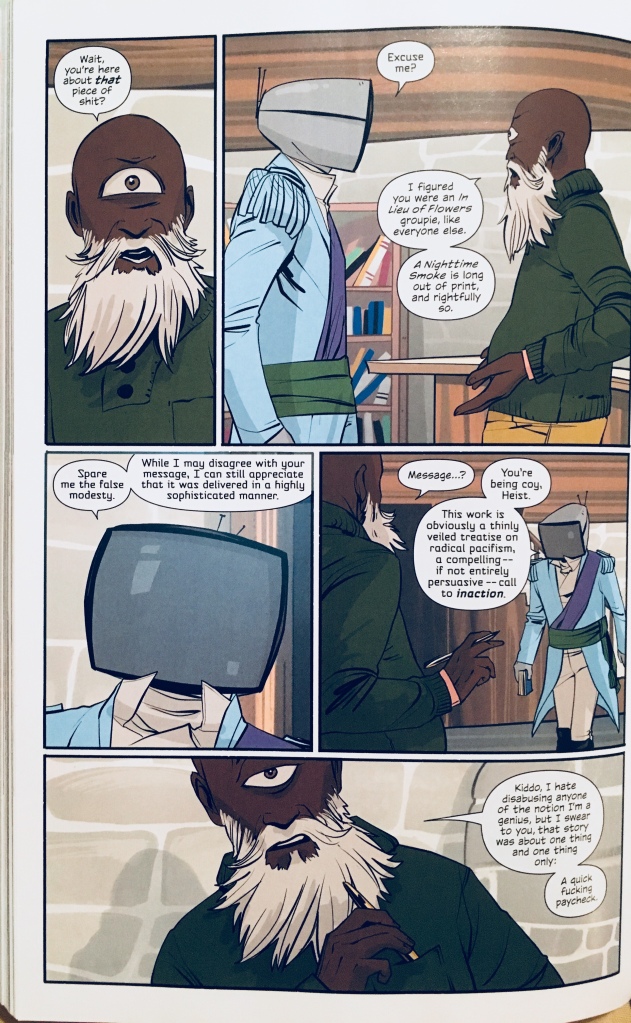 Prince Robot presses the issue by stating, “Spare me the false modesty. While I may disagree with your message, I can still appreciate that it was delivered in a highly sophisticated manner. . . . This work is obviously a thinly veiled treatise on radical pacifism, a compelling–if not entirely persuasive–call to inaction.” Heist maintains that the book does not have any message, and he pushes that position by exclaiming that he wrote it for nothing more than “a quick fucking paycheck.” He says he wrote himself in circles to he reached the right word limit that would please the publisher then they would slap a cover on it and sell it. Essentially, Heist is a pulp novelist, writing for the mass market and payment.

Heist’s novel did have a message in it, and when Marko and Alana find him, he is excited to know that they comprehended it. The fact that A Nighttime Smoke, an apparently “trashy” novel with a romance, grocery-store cover contains a message to counter the ever present war between Landfall an Wreath is important. While the authors I mentioned above are what some would term “literary,” pulp novels and romance novels contain messages as well. Janice Radway has shown this, and pulp novelists such as Iceberg Slim and Frank Yerby have even stated it. Slim wanted to write for those trapped in the “ghetto torture chambers” that may not ever get a hold of a book by James Baldwin. He wanted to write the same messages as Baldwin but for individuals with a fifth grade education. Yerby, on the other hand, wrote to a predominantly white middle class audience who, as he stated, were “bigots.” He hoped, through his work, to subvert and challenge their beliefs about race.

Vaughan and Staples do the same thing. While comics and graphic novels have achieved critical acclaim and success, there are still some that would view them as nothing more that pulp texts that should be consumed then cast aside, ephemera for the trash heap. However, this was never truly the case. Saga proves just that. The commentary that Vaughan and Staples provide is just as important as the commentary that “literary” artists do. In fact, I would say it may be even more important because it reaches a wider audience. D. Oswald Heist exists as a character within Saga that highlights the importance of any art as political protest and commentary. Through Heist, Vaughan and Staples argue that the book he appears within should be considered in the same manner, as commentary and protest.

For me, I think Nadia Bauman sums up part of Saga‘s message in an excellent manner:

Thus, as readers, we soak up this idea from every page unconsciously, and I think the message is universally appealing, because as human beings we want to believe that whichever choice we make, people around will understand and accept it like we accept all these weird creatures. We dream of the liberty to embrace our origins, be proud of who we are; we fall in love with the idea that happiness has no common recipe and everyone has a right to fight for one’s own special happiness. It is so inviting to yield to “magic wardrobe” effect and linger in the world of Saga a little longer, because it says: “Look, you can have eight limbs and still look sexy (and wear tulle maxi skirts, yes!).”

Whether or not we consciously see Saga as a commentary, it is, and “unconsciously,” as Bauman points out, we imbibe the text’s message. This process hopefully changes readers’ perceptions and leads them to embrace the overall message of equality that permeates Saga.

This is not all, of course. I would love to hear your thoughts. As usual, let me know in the comments below. Make sure to follow me on Twitter @silaslapham.