The Enlightenment, Religious Hypocrisy, and Republican Motherhood in Sedgwick’s “A New England Tale”

Note: During my first year as a PhD student, I took a class on novels in the Early Republic. The class looked at authors such as William Hill Brown, Charles Brockden Brown, Susanna Rowson, Hannah Webster Foster, Catharine Maria Sedgwick, and others. For the course, we had to write brief responses (2-3 pages) to the novels and discussions. While packing to move recently, I came across some of these responses and thought I would share some of them here over the next couple of posts. I am not altering what I originally wrote, unless it provides more clarity. There may be some questions contained within the posts that I did not have answers for when I wrote the, so I will leave those questions where there are, hoping they will spark conversation about the topic. I wrote today’s post on March 30, 2010.

The description of David Wilson’s letter to Mrs. Wilson at the end of Catharine Maria Sedgwick’s A New-England Tale encapsulates a couple of issues that Sedgwick addresses within her text. In the letter, David speaks to his mother about religious hypocrisy, incoporporates the Enlightenment debate over nature versus nurture, and tackles the importance of a “republican” mother to future generations. These topics appear within the course of one paragraph that barely takes up half of a page within the text.

David begins his letter by questioning his own soul and beliefs. He writes to his mother, “If I have a soul . . . eternity will be spent in cursing her who has ruined it” (173). Moving from his existential questioning, David begins to completely tear into his mother’s hypocritical Calvanistic beliefs. He tells her that she “neither fear[s] [hell], or believe[s] it; for if [she] did, [her] religion would be something besides a cloak to hide [her] hard, cruel heart” (173-174). Mrs. Wilson’s hypocrisy causes David to answer his previous query with a resounding “No!” because he sees his mother spout religious beliefs while all the while acting against those same beliefs. The Calvanistic beliefs of his mother appear later in the letter when he attacked, blatantly, the belief of predestination and spiritual awakening by saying, “I could do nothing to save my own would” (174).

Along with his attacks on Mrs. Wilson’s hypocritical nature, we encounter a commentary on the Enlightenment debate surrounding nature versus nurture. Obviously, David sides with nurture. He tells his mother he “might have believed [in religion] if [he] had seen more like Jane Elston” (174). He continues by informing his mother, four times, “that you taught me,” placing the emphasis of his demise on her, not his own actions. He even concludes by invoking the Locean blank slate, “My mind was a blank, and you [mother] put your own impression on it” (174). Extrapolated outwards, we see this debate throughout the novel as a whole in the form of Mrs Wilson’s other children. However, the debate falters a little considering Jane’s mother and her facade of religion. 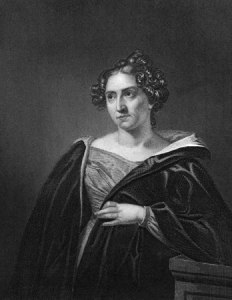 Since Mrs. Wilson does not embody the ideal “republican” mother, David’s condemnation of her helps to amplify the thought that in order to maintain a thriving republic one must have a good education and example at home. David’s education, as we see in his letter and throughout the text, involves him following his mother to religious meetings, watching her publicly and privately, and moving in to college all the while questioning what he has been taught. He epitomizes the importance of being raised by a mother who upholds the ideals of the republic. Since he did not have this example, he, and his sisters, succumb to the “thorny path” of life.

Obviously, the novel incorporates more ideas and social discussions thanked see in the half page letter from David. However, his letter does reinforce some of the key topics that Sedgwick explores within the context of A New-England Tale. The negative aspects of religious hypocrisy and Calvanism appear. We see, in a negative way, a comment on the “republican” mother and her example. Finally, we encounter a new debate, one brought on by the Enlightenmnet, about the true way individuals learn. We must take all of this with the knowledge that at the end of the novel, David’s mother abandons him and refuses to get him out of jail.