Illustrations in “The Adventures of Huckleberry Finn”

Over the past couple of posts, I’ve written about language in Mark Twain’s The Adventures of Huckleberry Finn (1884). Today, I want to turn the attention to the paraliterary aspects of the novel, specifically E.W. Kemble’s illustrations. I have written about Kemble before, focusing on his illustrations of Paul Laurence Dunbar’s “Nelse Hatton’s Vengeance.” There, Kemble’s drawing only relates to one sentence in Dunbar’s story, and it does not even touch on the story’s theme. In this manner, the image that Kemble draws undercuts the message that Dunbar seeks to convey with the story. Instead of highlighting the strength and honor of Nelse Hatton, Kemble depicts a caricature of a young Black boy with a large smile holding up fish, playing into preconceived images.

Unlike the illustration for Dunbar’s story, Kemble’s images for The Adventures of Huckleberry Finn depict the action within the novel; however, they also serve to undercut Jim’s dignity and honor. Because of this, Kemble’s images add to the debates surrounding race in Twain’s novel. For me, Kemble’s illustrations are a detriment to the overall novel. While some are humorous and play into Twain’s humor, the overall effect, specifically in the images of Jim, maintain images of Black inferiority and subservience.

Beverly R. David notes that Twain understood the importance of visual images in his work and how those images affected the reader. As she writes, “Mark Twain . . . thought illustrations were not only important to his work but that they had a major influential effect on his readers.” Since Twain does not provide much description for the characters in the novel, Kemble’s images assisted the reader in mentally creating Huck, Widow Douglas, Miss Watson, Jim, the Duke, the King, and others. Because of this, Kemble mediated the reader’s image of these characters and drew upon preconceived stereotypical representations in his depictions of Black characters. Thus, Kemble perpetuated, even if Twain tried to subvert, racist images. (I am not arguing here that Twain does not do the same thing. Twain does make moves to subvert these preconceived images, but I think overall he fails in subverting these racist representations.)

In 1930, Kemble looked back on illustrating Huck Finn. He talks about his model, a young boy named Cort Morris. (We do not have a photograph of Morris.) Morris served as the model for all of the images in the novel. As Kemble writes,

I used my young model (Cort Morris) for every character in the story–man, woman and child. Jim the Negro seemed to please him the most. He would jam his little black wool cap over his head, shoot out his lips and mumble coon talk all the while he was posing. Grown to manhood, “Huck” is now a sturdy citizen of Philadelphia, connected with an established business house.

This Negro Jim, drawn from a white schoolboy, with face unblackened, started something in my artistic career. Several advance chapters of “Huckleberry Finn” were published in the Century Magazine, then under the able editorship of Richard Watson Gilder and a select staff of assistants. My picture caught the fancy of Mr. Gilder and W. Lewis Frazer, the art director. I was asked to call and exhibit my wares. I went to Life and borrowed a few originals, but not one picture contained a Negro type.

There are multiple items within this quote that need to be teased out. First, we need to look at Cort’s excitement at portraying Jim and the way that he does this. Kemble notes that Cort would “shoot out his lips and mumble coon talk.” Cort, obviously, is drawing from stereotypes found in minstrel shows and images of the period. Along with this, we need to think about Kemble’s comments in the second paragraph. When some advance chapters went out, some editors contacted him about providing images for their publications. Specifically, they sought images of the “Negro type.”

Following these statements, Kemble moves into the conversation he had with Frazer. Frazer tells Kemble that he has several stories that need illustrating and they are set in the South. After the publication of the images, one author remarked, “At last you have an artist who knows the South.” The problem with this comment, though, was that Kemble had never been to the South. Kemble’s admission to having never been to the South is important because it highlights the pervasiveness of stereotypical representations of Blacks in the South and how those representations affected not just Kemble and Cort but how they affected the anonymous author as well. 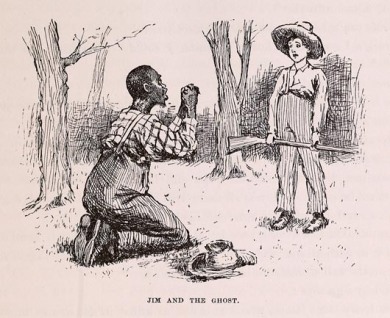 So, where did Kemble’s images come from? For one, they came from minstrel shows. However, as Stephen Railton notes on Mark Twain in His Times, they also came from other sources, most notably possibly from Josiah Woodbridge’s abolitionist image of an enslaved man kneeling and asking, “Am I not a man and a brother?” In Chapter VIII, Huck discovers Jim on Jackson’s Island. In the illustration, we see Jim kneeling, with his hands clasped, in a similar manner to the enslaved man in Woodbridge’s image. The difference, though, is the presence of Huck. Jim’s position, in a subservient pose to Huck, presents him as inferior to the fourteen-year-old Huck. As well, Huck holds a gun in his hands. Railton points out the power dynamics at play in the image: “Most readers want to see the meeting on Jackson’s Island as the beginning of a friendship, but as the visual starting point for their life together, this illustration draws a pretty blunt picture of the power dynamics between the races.” 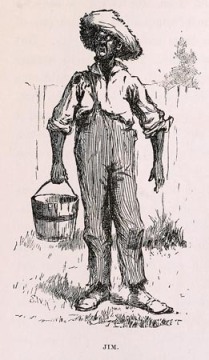 Throughout the novel, Kemble’s images of Jim vary slightly, it appears, in regard to age. However, they maintain stereotypical images of the minstrel show. The first image of Jim that we get is in Chapter II, and it shows Jim holding a bucket. Here, Jim’s face appears, as Kemble says about Cort’s modelling, with over-exaggerated lips.  The next image we see of Jim comes in Chapter IV when Jim is listening to the hair-ball. Here, again, Jim is kneeling, with his ear to the floor, as Huck stands over him. Like the image on Jackson’s island, this image creates a power dynamic in their relationship.

One final image I want to look at comes from Chapter XXXVIII, and it is the image of Jim’s coat of arms. Here, as Railton notes, the crest “imitates the stereotypical image on a fugitive slave wanted poster like the one the Duke prints up.” This is important because rather than presenting Jim as suffering under the institution of slavery, the image foregrounds Miss Watson’s ownership of Jim and her desire to retrieve him. Along with this image, Railton mentions an illustration from Chapter XXIV where Jim dons “King Lear’s outfit.” While the royal clothes could be seen as showing “Jim’s innate human nobility,” Kemble’s depiction presents him in a clownish manner.

These are not all of the images that I could discuss here. We could even look at other visual representations of the novel. I think, though, that this serves as a good starting point for these discussions. What are your thoughts? As usual, let me know in the comments below. Make sure to follow me on Twitter @silaslapham.

One Comment on “Illustrations in “The Adventures of Huckleberry Finn””