T. Geronimo Johnson’s "Welcome to Braggsville" and the Past 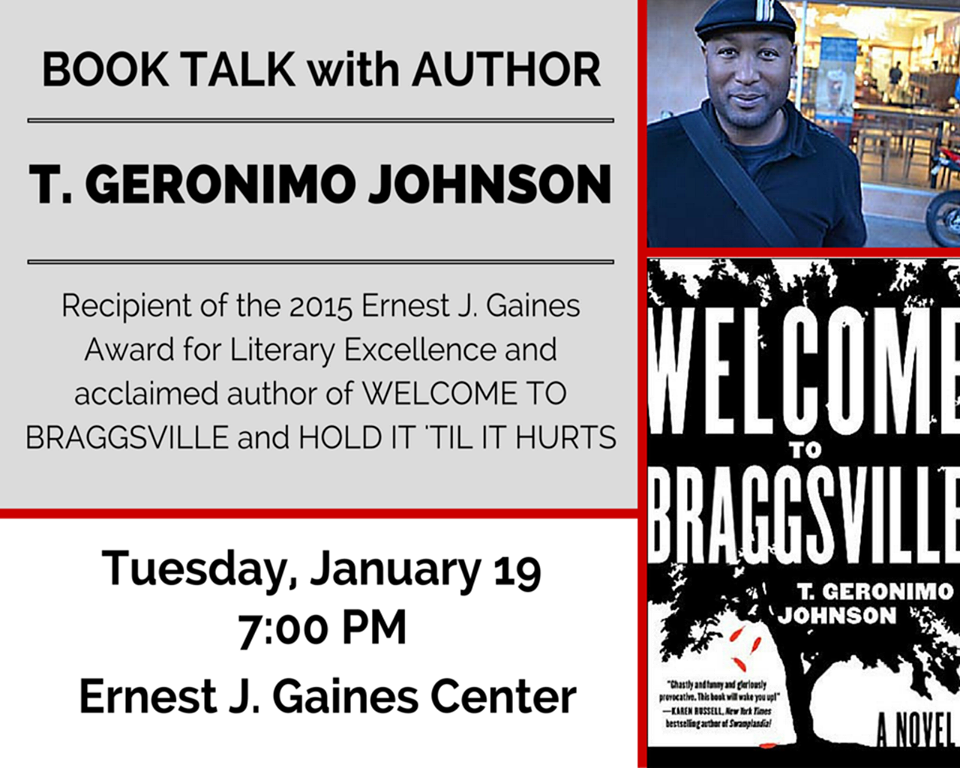 Reading 2015 Ernest J. Gaines Award for Literary Excellence winner T. Geronimo Johnson’s Welcome to Braggsville (2015), I noticed the continuous intersections between the histories of Native Americans and African Americans within this country, and specifically in regards to Georgia. These intersections are nothing new; Alice Walker incorporates them in The Third Life of Grange Copeland (1970), and activists such as David Walker and Hosea Easton during the Antebellum period highlighted the connections. Today, I want to briefly discuss the Native American presence (on the periphery) in Johnson’s novel and provide a little background on the way that the Abolitionist movement linked the Native American and African American calls for citizenship together.

Chronicling the history of Braggsville, GA, the narrator describes Raymond Bragg’s ascendancy within the state and the nation, commenting that Bragg fought “along side Old Hickory himself, as Jackson would soon be known, in the battle of Negro Fort (1816) and again in the First Seminole War (1817-1818)” (112). These two events, and the subsequent Seminole Wars, took place to keep slaves from running away to Florida (a Spanish colony at the time) where they would live in the swamps and where Seminoles would take them in as part of the community. If this practice continued, whites feared slave revolts and uprisings similar to that in San Domingue during the latter part of the eighteenth century.
Later, after Old Hickory became President of the United States, Bragg hoped to have the capital of Georgia moved to Braggsville. Jackson signed the Indian Removal Act in May 1830. This act came about partly because of the discovery of gold on Cherokee land and partly out of the desire to expand agricultural production, which would include slavery, further inland. Speaking of Bragg’s desire to move the capital, the narrator says, “It was August 1830. The natives were peacefully relocated to Oklahoma, and the land prices once more stable, in no small part because of the valor of men like Bragg and Jackson” (emphasis added, 112). The capital did not relocate to Bragg’s “fecund twenty-five thousand acres,” and he remained irritated by the fact till his death.
This is not the only reference to Native Americans in Johnson’s novel. The group of students who stage a “performative intervention” against the Civil War reenactment in the town label themselves the Four Little Indians, and Candice, one of the group, maintains she has Native American ancestry. Perhaps most interesting is that the group, which consists of a white male, white female, African American male, and Asian American male, stages their first “performative intervention” at Six Flags in Vallejo, CA. They stage the intervention to spread the symbolic ashes of Ishi over the land him and his people once inhabited. Ishi became a side-show attraction, and his “benefactor,” Alfred Kroeber, “installed Ishi in a comfortable apartment in the Museum of Anthropology at UC Berkely” (36). Ishi became, as Charlie sort of does, a representation of a person rather than a person in and of himself.
These connections remind me of the intersections between calls for Native American and African American rights during the early part of the nineteenth century. Before the Indian Removal Act, abolitionist such as Lydia Maria Child and William Llyod Garrison argued against Native American removal and for the gradual emancipation of slaves. However, once Jackson signed the act, the movement shifted its focus call for the immediate emancipation of slaves and put calls for Native American rights on the back burner. The group did reignite these calls, though, only after the Civil War and the end of “slavery.”

The clearest image of this link, and shift, can be seen in the first masthead of Garrison’s The Liberator. The masthead appeared for the first time on August 13, 1831, and it shows the atrocities of slavery and the slave trade in gruesome detail. Prominently featured in the middle, one sees a slave auction taking place with a sign that reads “Slaves Horses & Other Cattle to be sold at 12:00.” In front of the auctioneer, there are bidders and slaves. It can be assumed that the slaves will be torn apart from their families and they will possibly never see one another again. In the background, to the left, a slave stands with his hands tied together at a post. A master wields a whip and is in the process of striking the bound “property.” All of this occurs with the US Capital building in the background and a banner that reads “Liberty.”

None of this appears to be anything unexpected when looking at an abolitionist newspaper or drawing from the period. What most people do not notice upon initially looking at the picture occurs between the words “The” and “Liberator” in the title. Strewn on the ground, like litter, a piece of paper rests between the two words. The paper reads, “Indian Treaties.” This picture of the atrocities of slavery carries with it the undercurrent of the atrocities committed against indigenous people of this nation. Throughout The Liberator‘s run, it linked the two causes, promoting and discussing activists such as William Apess within its pages.

Welcome to Braggsville contains numerous other topics that are worthy of discussion: the role of names (especially D’aron’s), the conflation of Charlie with the Charlies that litter people’s lawns, the relation between Quint and Quentin Compson, D’aron’s views of the South and how they get conflated, and other topics. Johnson’s novel provides a plethora of topics that should be discussed. Make sure you head over to the Ernest J. Gaines Center on January 19 for a reading by Johnson.

2 Comments on “T. Geronimo Johnson’s "Welcome to Braggsville" and the Past”