From the very beginning, Ernest J. Gaines has made his indebtedness to Ivan Turgenev, and specifically Turgenev’s Fathers and Sons (1862) known. When Gaines entered the library for the first time in California, he did not find books by African American authors; instead, he discovered, amidst the rows and rows of bound texts, books by Russian, Irish, French, and American authors who wrote about the land, specifically Turgenev, De Maupassant, Steinbeck, Faulkner, and others. With that in mind, I want to take a moment and comment on how we can see Turgenev’s influence on Gaines, especially in regards to his first novel Catherine Carmier (1964).  Gaines has said that Fathers and Sons served as his Bible while composing his first novel, and even a cursory glance at Turgenev’s masterpiece reveals this connection. 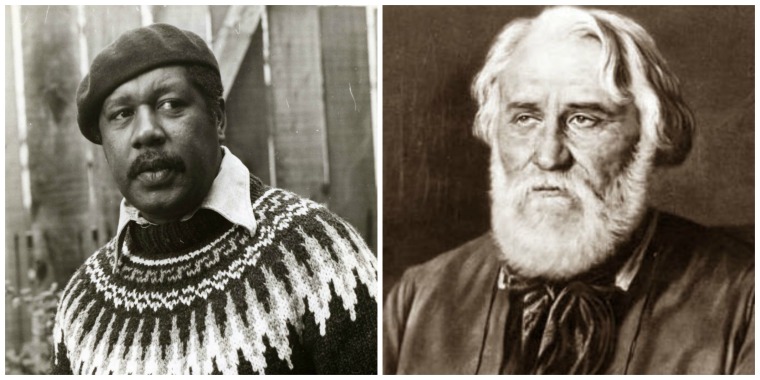 I do not have the space to go into detail on every aspect that links the two texts together; however, I want to highlight a specific passage from chapter 3 of Fathers and Sons that should be read in relation to not only Catherine Carmier but to Gaines’s oeuvre as a whole. As Bazarov and Arkady travel through the countryside with Arkady’s father Nikolai, the trio encounter a rural, pastoral Russian landscape that appears very similar to the rural Louisiana landscape that Gaines describes in his work. After Nikolai tells his son that he has sold some of the land to the peasants, similar to the process of share cropping in Gaines,  the trio ride through a country that “could not be called picturesque” (8).

They see a land overgrown and houses in need of repair. When the come across “little villages,” they encounter “low hovels under dark and often tumble-down thatch roofs, and slanting barns with walls woven of brushwood and gaping doorways beside neglected threshing-flora; and churches, some brick-built, with stucco peeling off in patches, others wooden, with crosses fallen askew, and overgrown graveyards” (8-9). The travelers see a region in decay, a region under the control of Nikolai. Upon viewing the deterioration, Arkady becomes affected, and his “heart sank” (9). Arkady comes across, to a certain extent, like some of Gaines landowners like Frank Laurent and Jack Marshall, owners who appear to see change but don’t know exactly what to do about it. Arkady believes that “reforms are absolutely necessary” to help with the economic situation of the peasants and the landowners in the region (9).

Like the landscape in Fathers and Sons, Gaines portrays a landscape and region in flux. As sharecropping by Cajuns and African Americans increases, the land, and the community changes. Landowners tear down houses to make room for more crops, and African Americans leave because of the lack of opportunities. When Madame Bayonne and Jackson Bradley walk through the quarters, the narrator describes the scene in a similar fashion to that found in Turgenev:

They were in the heart of the quarters now, and he saw what she meant about the houses and the field. Most of the houses on the left had been torn down and had been replaced by patches of corn and sugar cane. The houses that still remained looked worn and dilapidated that Jackson knew it would be only a matter of time before they were torn down completely. (78)

While the political situations that Turgenev and Gaines differed, their description of the landscape appears similar. Like the view that Arkaday, Bazaron, and Nikolai experience, Jackson and Madame Bayonne encounter a landscape that is in flux, moving from a community of houses and people to  one that focuses completely on agriculture.

Along with the houses in the quarters, the narrator describes the cemetery as overgrown. When Jackson approaches it, in his walk through the quarters, “he could not see any graves for the high weeds, and he was not sure that he was looking in the right places” (191). The narrator in Fathers and Sons describes the graveyard where Bazrov rests in a similar manner. “Like almost all our [Russian] graveyards it presents a wretched appearance; the ditches surrounding it have long been overgrown; the grey wooden crosses lie fallen and rotten under their once painted gables; the tombstones are all displaced, as though someone were pushing them up from beneath; two or three ragged trees scarcely give scant shade; the sheep wander unchecked among the tombs” (165). Just as the cemetery in Catherine Carmier, nature overtakes Bazarov’s final resting place; however, while the overgrowth has a negative connotation in Gaines, the mixture of nature and the nihilist Bazrov creates a more hopeful pastoral image. The cemetery in Carmier, and elsewhere in Gaines, serves as a locus of memory, where the past and the present collide. In this way, both resting places mirror one another.

This does not cover all of the connections between the two novels. Other avenues end further exploration, such as the links between Bazarov and Jackson, the discussion of generational rifts, and further discussion of the land and changing times in both novels. What re your thoughts As usual, let me know in the comments below.

← Epideictic Rhetoric and the Literature Classroom?
Point of View in William Melvin Kelley’s “A Different Drummer” →