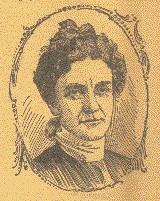 Every semester, I enjoy teaching Mary Rowlandson’s Narrative in relation to Sarah Kemble Knight’s The Journal of Madam Knight because Rowlandson plays into students’s perceptions of women’s role during the colonial period and early part of the eighteenth century and Knight works to dispel their preconceived notions that women did not have much agency during the period. As well, Knight provides a a counter to Rowlandson because her journal exhibits a more secular view of the world. Today, I want to touch on a couple of these aspects in Knight’s Journal.

In a previous post, I noted that from the very beginning of Rowlandson’s Narrative, her voice gets subverted and her identity becomes inextricably linked to her husband. Increase Mather does this in “The Preface to the Reader” by never referring to Mary by her name but instead by linking her to Joseph and by applying the appellation of “Gentlewoman” to her whenever he mentions her at all. By doing this, Mather strips Rowlandson of a personal identity, tying her experiences more to the community and its overall suffering rather than Rowlandson’s personal traumas during her captivity. Rowlandson does regain her voice and identity once the narrative begins; however, she still focuses her journey in relation to the community at points as well.

Unlike Rowlandson, Knight’s idenity does not become detached from herself or added on to another individual. Rather, the journal solely follows her travels and her reactions to what she encountered on her journey from Boston to New York and back. Even in Theodore Dwight’s “Introduction” that appears in the first printed edition of the Journal in 1825,  Dwight grants Knight agency and a singular identity. He identifies her simply by stating, “She was called Madam Knight” (85). Likewise, Knight focuses her writing on herself, not as a representation of God’s providence on the community.

Along with this difference in focus, Knight presents her travels in a poetic manner that eschews biblical correlations to events and draws upon “European belles lettres” and a more secular representation of her experiences. This can be seen in the way that Knight describes the first river she crosses. Whereas Rowlandson sees her river crossings through a spiritual lens, even praising God that she does not get wet during one crossing, Knight only makes one brief Biblical reference to Lott’s wife. She writes,

The Cannoo was very small and shallow, so that when we’re in she seem’d redy to take in water, which greatly terrified mee, and caused me to be very circumspect, sitting with my hands fast on each side, my eyes stedy, not daring so much as to lodg my tongue a hair’s breadth more on one side of my mouth then other, nor so much as think on Lott’s wife, for a wry thought would have overset our wherey: (92)

Here, Knight’s reference to “Lott’s wife” does not appear to carry with it any spiritual connotations, unlike Rowlandson’s reference in her Narrative. At one point, Rowlandosn thinks about the temptation Lott’s wife faced in turning around to see the destruction of Sodom and Gomorrah: “I went wrong that day mourning and lamenting, leaving farther my own Countrey, and traveling into the vast howling Wilderness; and I understood something of Lott’s Wife’s Temptation, when she looked back” (41).

In one aspect, it feels as if Knight references Lott’s wife in a joking manner because everything surrounding the reference centers on the fear that minute movements of her body will lead to the canoe capsizing and plunging her and her guide not the river. Rowlandson, on the other hand, continually thinks back to her family, home, and comforts in Lancaster. As the wife of a Puritan minister, she sees her captivity as a test from God and as an indication that He has chosen her as one of the elect. Through referencing Lott’s wife, Rowlandson compares herself, in some ways, to the woman who, despite God’s command,  turned to look upon her burning home, this turning into a pillar of salt. This is a “temptation” that Rowlandson struggles with throughout her Narrative.

This does not mean to suggest that Knight did not have a spiritual side or spiritual view of her travels. At the end of her Journal, she praises God for allowing her to return to her family intact. She writes, “[I] desire sincerely to adore my Great Benefactor for this graciously carrying forth and returning in safety his unworthy handmaid ” (116). While she does not speak of God’s hand when she relates what she goes through during her trip, she does ultimately acknowledge His overarching hand in getting her safely home. In this way, Knight can be seen as a movement from the seventeenth century Puritan authors towards a more secular colonial citizenry that manifests itself in Benjamin Franklin. It also highlights the coming together of secular and religious thought that manifests itself in the works of Jonathan Edwards.

Along with these ideas, there are other things that can be explored in relation to Rowlandson and Knight. For one, Knight’s poetic language can be contrasted with the plain style of Puritan authors such as Rowlandson. As well, it would be worthwhile to examine Knight’s verses with Anne Bradstreet. Another area worth looking at would be the ways that Rowlandson and Knight each use food as class markers. Rowlandson, due to her captivity, acquiesces to eating food she would not normally eat. Knight, when she encounters food that disgusts her, she simply refuses and leaves. In both texts, food serves as a social marker of class and rank.

These are brief thoughts. What do you think? As usual, let me know in the comments below.