Images of the Grotesque in March

Last year, I wrote about Nate Powell’s artwork in the graphic novel The Silence of Our Friends. Today, I want to look at some of his work in Book Two of March. While there are panels in Books One and Three that could be discussed, there are a couple of specific panels within Book Two that I want to look at and explore. Before delving into these images, I want to point you towards Leah Milne’s piece on the African American Intellectual Historical Society’s blog where she discusses March and the “good trouble” narrative. Milne argues that March, and other comics, can be a site of “good trouble” to push people towards awareness and action. Powell’s drawings add to John Lewis’ and Andrew Aydin’s words, providing visual links to the reader. 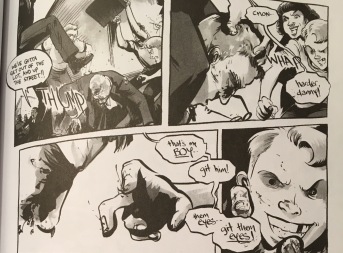 Perhaps the most visceral images of Book Two when the Freedom Riders arrived in Montgomery, AL, on May 20, 1961, and encountered a mob who viciously attacked them. In these panels, Powell’s black and white artwork, like that in The Silence of Our Friends, juxtaposes and plays with our general connotations of white and black. This juxtaposition becomes most apparent in the panels that show a young, white boy, and the behest of father, joining in the assault of the Freedom Riders. In one of the panels, the father’s words, “git them eyes!” carry over into an image of the boy’s face, in front of a black background. The boy’s eyes look as if they are glowing with demonic rage as blood splotches appear on his face and his fingers reach out towards the reader, eliminating the victim from the frame. The grotesqueness of the boy calls to mind Reginald Marsh’s “This is her first lynching” from the NAACP’s 1935 exhibit An Art Commentary on Lynching.

Like Powell’s panel, Marsh’s image is in black and white, and the inhabitants of the picture appear grotesque, enveloped in hatred. We do not see the victim of the violence in “This is her first lynching”; instead, we see the psychological effects of racism and segregation on the perpetrators of that vehemence. Marsh’s image shows an angry mob on their way to a lynching, and in he middle of the crowd, a man holds up a young girl. Unlike the other individuals in the picture the girl does not appear gray; rather, she has an aura possible innocence in her color in contrast to the others. This innocence, of course, is about to be destroyed. In the bottom right, we see two older, white women, and their faces, like that on of the young boy, appear grotesque and contorted by hatred. The man’s face next to the young girls’ leg looks like a zombie. Through this representation, Marsh delves into the psychological effects of oppression on the oppressors themselves.

Powell creates the same type of imagery. In the page above, the faces of the mob members take on distorted characteristics, accentuating their racism. In the middle panel, we see a victim of the mob’s violent aggression, and the older, white woman in the frame looks similar to the women in Marsh’s image. She greedily, and lustfully, gropes for the man she wants to attack, saying, “KILL HIM!!” In this moment, the woman, and those with her, appear as non-human; they have lost complete control of themselves and who they are. Powell highlights this aspect when he juxtaposes Barack Obama’s inauguration with images from May 20, 1961.

While some of the mob congratulate each other and shake hands, as in the bottom left of the page, we also see the young boy at the top left of the page. As with the previous panel, we see his face against a black background; however, here the boy looks down at his bloody hands in disbelief, as if asking himself, “What have I just done?” We know what he has done, and why, and his father’s hand, resting on the boy’s shoulder, lets us know that even if the boy questions his actions, his father will “correct” his thoughts and teach him how to hate. Below and to the left of the young boy, we see a white and black man together, both bloody, symbolizing unity and equality. All of these images, and more, occur with a double page frame of Aretha Franklin singing “My Country Tis of Thee” at Obama’s 2009 inauguration.

Within these pages, we see the past and the present coming together. Even though March flashes back to the sixties and forward to 2009, I cannot help but look at Powell’s Aretha Franklin in 2009, surrounded by images from May 20, 1961, as a commentary on how far we still have to go before achieving equality. We see the Confederate Battle Flag, a passive policeman who stood by as the violence erupted, a young boy, a dead woman, and battered victims. As Franklin sings, “Let freedom ring,” she is surrounded by violence and oppression in the adjoining images. Tamir Rice, Eric Garner, Alton Sterling, and countless, countless, others encompass the page with their lingering presence.

There is much, much more I could write about in relation to the images in March, but I do not have the space here to do that. Instead, I want to conclude by mentioning some literary works that present the same types of themes as Powell and Marsh do in their pictures. Specifically, I would suggest looking at James Baldwin’s “Going to Meet the Man” in relation to “This is her first lynching” and even at Ernest J. Gaines’s “Bloodline” in relation to the psychological effects of racism on the white perpetrators. There are other texts as well. If you would like more, go see “The Specter of Lynching” on the Ernest J. Gaines Center’s blog.

What are your thoughts? What other texts should we look at in relation to March? As usual, let me know in the comments below.

Make sure to check back on Thursday for the first of two post on Jackie Ormes.

One Comment on “Images of the Grotesque in March”