Over her career, Jackie Ormes produced four comics for newspapers such as the Pittsburgh Courier and the Chicago Defender. Continually hitting up the journalistic glass ceiling in the early to mid-1900s, Ormes, along with her newspaper pieces on fashion, sports, and other topics, penned comics that tackled the political issues facing African Americans, and specifically African American women, during the period: Torchy Brown (1930s), Candy (1940s), Patty-Jo ,n, Ginger (1940s-1950s) and Torchy Brown: Heartbeats (1950s).

Deborah Elizabeth Whaley places Ormes in relation to what she terms “Black cultural front comics (BCFCs),” strips that “carrie[d] a polittically progressive message with the intent to contribute to and inform about broad-based social-justice struggles of the early twentieth century, draw[ing] on Black vernacular idioms and performance for strategic purpose of political subversion through humor and signifyin(g) or Black speech patterns, and presents the diverse aspects of Black, everyday life, including gender, sexuality, and class diversity” (35. 36). Each of Ormes’ strips can be labeled BCFCs; however, I want to take the time today to focus on Patty-Jo ‘n’ Ginger, a one panel gag that appeared in the 1947 in the Pittsburgh Courier and ran through the mid-1950s. 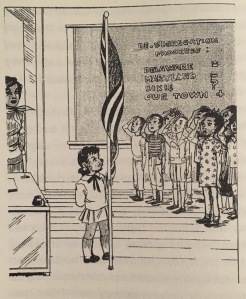 When I first saw this Patty-Jo ‘n’ Ginger image, I immediately thought about Colin Kaepernick and 2016. However, this panel originally appeared on October 16, 1954, five months after the Brown v. Board of Education decision. The comic shows a desegregated school with a multicultural class saying the Pledge of Allegiance. While she is close to the flag, Patty-Jo does not “reverently” acknowledge its presence by saluting it. Instead, she merely stands there while the other students salute. (Note that the teacher at the left of the panel does not salute either.) Whaley, when noting Patty-Jo’s proximity to the flag, adds that her placement “demonstrates that a small voice can still assert agency at the local level” (58). In fact, Patty-Jo, not the older Ginger, typically is the one to espouse the societal problems through the strip.

On the chalkboard, we see “De-Segregation Process” followed by a list of places. Delaware and Maryland both have minus signs, Dixie has a question mark, and “Our Town” has a plus sign. The meaning here is clear,even though a decision in Brown v. Board occurred in May 1954, progress still needs to occur. While Patty-Jo’s town may be integrated five months after the decision, border states such as Delaware and Maryland remain segregated. (For more on Delaware see Belton v. Gebhart and Bulah v. Gebhart.) Dixie, of course, remains in question. The Little Rock Nine did not integrate Little Rock Central High School until 1957, Alabama did not begin to see desegregation till 1963, Mississppi in the 1960s, and so on. In fact, there are still cases going on over desegregation and the discussion involves charter schools, voucher programs, and other items. In this regard, Patty-Jo standing next to the American flag while other students salute, still, sadly, resonates with our own time. 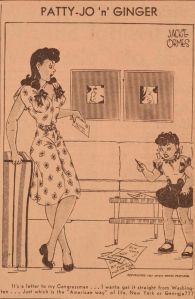 On February 8, 1947, the gag shows Patty-Jo with a pen in her hand as three pages fall out of the frame and Ginger holds up an envelope addressed to what appears to be William L. Dawson, an African American congressman representing Chicago from 1943-1970. As if explaining what she is doing, Patty-Jo intones, “It’s a letter to my Congressman . . . I wanta get it straight from Washington . . . Just which is the “American way” of life, New York or Georgia???” Through this statement, the envelope, the scraps of paper, and the rest of the image, Ormes highlights racial subjugation throughout the nation, not just in Dixie. By presenting New York or Georgia in this way, we are left to question which is actually “American” when both states keep blacks and others in subjugation in varying ways. On top of this, Patty-Jo addresses the letter to Congressman Dawson, an African American representative from Chicago, another urban site of the “promised land.” Chicago, though, serves as a signifier of political resistance as well, think about the Chicago Defender. Finally, the paper on the floor asks, “How come Why?,” “Which,” and the bottom piece, covered up by the questions that rest on top of it, contains what appears to be part of Abraham Lincoln’s Gettysburg Address, “By the peopul [sic] for the peopul [sic].”

What, on the surface, appears to be nothing more that a young girl writing her Congressman, creates a semiotic web that needs to be untangled and explored in detail because of all of the referents that Ormes places within this single panel. In the gag, Ormes questions what exactly the “American way” is, draws attention to the advancement of African Americans, political activism in Chicago, and a history of promises that never seem to truly materialize. This does not even take into account the setting of the panel which appears to be a middle class apartment or house with art on the walls, nice furniture, and Patty-Jo and Ginger dressed in middle class clothes. What does this aspect add to the semiotic stew that Ormes creates?

I had intended, with this post, to look at more than two of Ormes’ Patty-Jo ‘n’ Ginger gags, but I did not have the space to do that. Instead, in the next post, I will look at three more and explore them each in some detail, pointing out the ways we can read them in both a historical and current context.

Until then, I would like to leave you with a brief video of Ormes from 1953.