Last post, I wrote about a couple of Jackie Ormes’ Patty-Jo ‘n’ Ginger one panel gags that appeared in the Pittsburgh Courier from the late 1940s through the mid-1950s. Over the next couple of posts, I want to take the time and explore a few more and how teachers can incorporate these images in the classroom along with texts by authors such as Gwendolyn Brooks, Richard Wright, and James Baldwin. 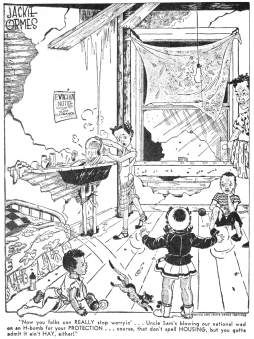 When searching for images from the Patty-Jo ‘n’ Ginger strip, the one that immediately caught my eye shows Patty-Jo addressing a room full of African American children and their mother in what appears to be a one bedroom, tenement apartment. Patty-Jo tells the occupants, “Now you folks can REALLY stop worryin’ . . . Uncle Sam’s blowing our national wad on an H-bomb for your PROTECTION . . . course, that don’t spell HOUSING, but you gotta admit it ain’t HAY, either!” In her matter-of-fact manner, Patty-Jo comments that while the government spends money on national “defense,” it does nothing for its own citizens who need support. The emphasis on “REALLY,” “PROTECTION,” “HOSUING,” and “HAY” links the words together, highlighting the contradictions in the government’s position. While the family may have housing, it is obviously inadequate housing.

In regards to the image, Ormes presents the reader with a dilapidated room that serves as kitchen, bedroom, and living area for a family of four, possibly even more. The baby in the bottom right crawls towards an open can, and his clothes, like that of the others, are in tatters. The girl at the sink appears astonished at Patty-Jo’s words while the boy on the right looks on in disgust. The countenance of the woman who appears half-way in the frame on the right does not show any positive or negative emotions. Along the left side of the image, we see the wall falling apart and hanging, just above the sink, we see an eviction notice labeled “slum clearance.” We also see a busted window, a cat, and other aspects of inadequate housing conditions.

Instantly, when I saw this panel, I thought about the opening scene of Richard Wright’s Native Son (1940) when Bigger Thomas wakes up in his one-room apartment with his mother and his siblings. In the first couple of pages, Wright paints an image of the “Promised Land” that awaited African American migrants from the South, a one-room apartment filled with rats and inadequacy. Bigger’s room turns into chaos as he chases a rat around the apartment, eventually killing it. Symbolically, of course, this shows Bigger entrapment and subjugation. Ormes’ image conveys the same feeling of chaos and deprecation through its depiction of the bare apartment with a multitude of people and a cat occupying a very insular, enclosed space.

Along with Wright, my mind also went to Gwendolyn Brooks’ poem “kitchenette building” (1945), a poem that alludes to, and questions, Langston Hughes’ “Harlem (dream deferred).” Rather than being able to think about the word “‘Dream’ [that] makes a giddy sound” and its possible appearance amongst the “onion fumes” and “fried potatoes,” the narrator must worry about survival and the little moments of opportunity, like making it to the bathroom before another of the building’s occupants does and uses all of the “lukewarm water.” Ormes’ image, especially in the face of the young boy, shows this lack of possibility that the space provides. Even one look at the walls shows that nothing, apart from the eviction notice, exists to help the occupants dream of a better future: no art, no books, no records, no furniture except a bed.

Writing about Harlem, and specifically Riverton, in Nobody Knows My Name (1961), James Baldwin espouses Patty-Jo’s sentiments about the “housing” that Uncle Sam provides in the North for African Americans. Baldwin does not bring in the imperialistic commentary on the construction of the H-bomb as Ormes does; however, he does comment on the ways that the white, hegemonic society uses “the projects” to make individuals feel like captives. Writing about the ways that people who live in the projects feel about their environment, Baldwin states,

Here, like Ormes, Baldwin calls out the supposed “protection” that the government, or those looking to help him and other African Americans, espouses. Under the guise of protection–in Ormes’ case the H-bomb, for Baldwin the police and initiatives–“the white world” keeps its finger on the oppressed, making sure that they do not swerve too far out of line and overstep their bounds. This, of course, sounds like what one would hear about the South during this period, and Baldwin makes that connection crystal clear: “[Migrants] do not escape Jim Crow; they merely encounter another, not-less-deadly variety” (177).

Even though I did not discuss it in this post, I would suggest thinking about this topic in relation to Ormes’ Torchy Brown “Dixie to Harlem” strip that appeared in the later 1930s (pictured above). Using Ormes’ image as a starting point, teachers can have students engage in discussions of African American migration, housing, and government oppression by enlarging the scope of the image and examining texts like the ones mentioned above. I would also suggest having students look at images such as Henry J. Lewis’s “The Great Southern Exodus” (1889), an image I have discussed before. This would open up a broader avenue for students to explore African American migration from the latter part of the nineteenth century through the mid-twentieth. 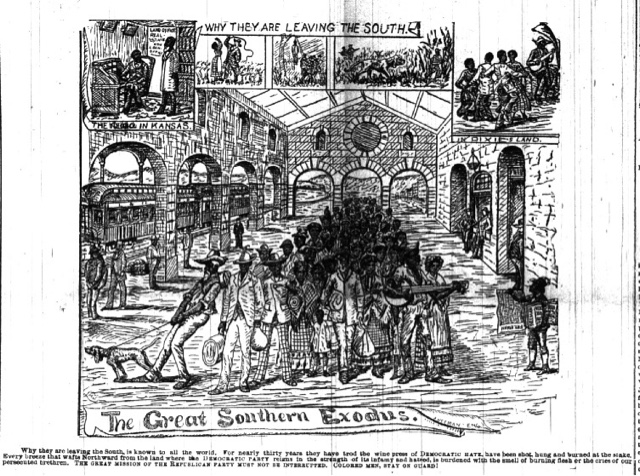 As usual, I would love to hear your thoughts on this topic and what other texts we could possibly use in the classroom to help students learn about these issues. Make sure and leave a comment below.