Last week, I read a post on Shadow and Act about the 1969 western 100 Rifles,  film based off of Robert MacLeod’s The Californio (1966). In his piece for Shadow and Act, Sergio Mims discusses Jim Brown’s role in the film, the fact that he portrayed such a strong character, and the interracial relationship that blossomed between Brown’s and costar Raquel Welch’s characters. After reading the piece, I decided to track down the film and watch it. While the interracial scene is important, and I will talk about that briefly later, there are some other aspects of the film and some other scenes that should be discussed in relation to race and colonialism.

In Cowboys as Cold Warriors: The Western and U.S. History (2004), Stanley Corkin reads westerns from the 1950s and 1960s as metaphors that discuss issues within the United States and the relationships between the country and the rest of the world. For example, when discussing The Magnificent Seven, Corkin reads the film as a comment about “the relationship between the United States and underdeveloped countries” and in relation to the dissolution of the British and French empires (4). Carrying on in this vein, we must view 100 Rifles as a commentary on race at the end of the 1960s, a year after Martin Luther King Jr and Robert F. Kennedy died at the hands of assassin’s bullets and a year after the Summer of ’68. Through this viewing, the film provides a critique of the cultural milieu it initially appeared within; in fact, the trailer blatantly states, “This picture has a message . . .”

I would argue that the film contains multiple anti-colonial and anti-racist messages, and I cannot disentangle all of them here. However, I will only tackle a couple of the issues, exploring what the messages convey in relation to the late 1960s. To begin with, though, we need to recognize the structural set up on 100 Rifles. Rather than pitting cowboys against Indians, the villains in the film are Mexicans, and I would argue by extension the white American Steven Grimes (Don O’Herlihy),  and the heroes are an African American sheriff, Lyedecker (Brown), the Yaqui-Anglo Yaqui Joe Herrera (Burt Reynolds), and a Yaqui revolutionary, Sarita (Welch). Together, they confront and defeat the Mexican General Verdugo (Fernando Lamas) and the American Grimes who seek to eradicate the Yaqui Indians so the railroad that Grimes works for can proceed throughout Mexico.

Instead of have white, Anglo characters as the protagonists of the film, 100 Rifles focuses on resistance from the Other as Lyedecker, Herrera, and Sarita fight back against the representatives of colonial advancement General Verdugo and Grimes. This reversal becomes apparent from the beginning of the film. When Lydecker tracks the bank robber Herrera to Sonora, both men get captured by Verdugo. Herrera stole $6,000 from a bank in Phoenix so he could buy 100 rifles to help with the Yaqui resistance. When Verdugo interrogates the men, he looks at Herrera and says, “You look Mexican, but you don’t talk Mexican. What the hell are you?” Herrera snaps back and explains that his mother was Yaqui and his father hailed from Alabama, claiming he is not Mexican. Herrera rejects being labeled as a Mexican, a symbol of colonization in the film, thus constructing his own identity. 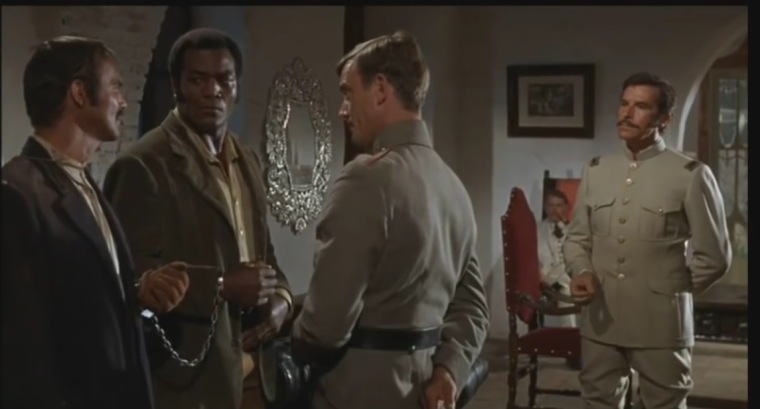 Notice the positioning here. Lyedecker and Herrera are joined by handcuffs, Verdugo stands to the right, and Grimes sits as an observer.

Later, when Verdugo captures the men again, he plans to have them shot before a firing squad. As they are waiting to be executed, Lydecker and Herrera talk about their predicament. When they start to resign themselves to their situation, Lydecker bemoans, “Look at me now, smart Lyedecker hung up on a fence with a bunch of scruffy Indians.” Lyedecker presents himself as superior to the Yaqui who have died trying to escape their oppression, and Herrera calls him out on this as he begins to harangue the sheriff for his outlook. Herrera tells Lyedecker he “would’ve been a hell of a law man” since he only cares for himself. Lyedecker responds by calling Herrera a “pissant border half breed.” Here, the tensions between the Yaqui Herrera and the African American Lyedecker start to come to a head before their execution.

Herrera begins to tell Lyedecker what he knows about police and sheriffs from the small town barber shop sheriffs to the St. Louis policemen who will swing their billy clubs into victims’ heads because “they look you up and down and you’re guilty. You don’t get no trial, just like we ain’t gonna get one now.” Rather than have Lydecker speak on police profiling and brutality, Herrera, a phenotypically white character played by Michigan native Burt Reynolds says the lines. In this way, the film positions white audience members as criminals being profiled, thus allowing the audience members to hopefully identify with African Americans who routinely experience these types of interactions with law enforcement. This positioning reminds me of the ways that Charles Chesnutt causes white readers to identify with Paul Marchand and Donald Glover in his last two novels.

Immediately following this exchange, the camera cuts to a conversation between Grimes and Verdugo. Grimes tells the General, “Washington is going to react very badly to [the execution of Lyedecker and Herrera],” causing thoughts of the turbulent 1950s and 1960s and racial tensions throughout the country in places like Little Rock, Oxford, and Birmingham. Verdugo responds, “What are they going to do? Send a note saying, ‘Where is the black policeman?'” Again, the undercurrent the Civil Rights era bubbles to the surface and makes us think about Andrew Goodman, Michael Schwerner, James Chaney, Emmett Till, and countless others. Questions will arise, Grimes asserts, but Verdugo shrugs this off claiming that the company that Grimes represents cares for its trains, “not two gringos who disappear in Mexico.”

We need to read these exchanges, and others in the film, through the lens of the period. In this way, 100 Rifles, along with other films and popular productions of the period, provide a push back and open up discussion on cultural issues that affected the late 1960s and continue through today. In the next post, I will finish up with this scene then discuss the relationship between Lyedecker and Sarita that appear in the film. What are your thoughts? As usual, let me know in the comments below, and make sure to follow me on Twitter at @silaslapham.