Last post, I wrote about the racial undercurrents that populate Tennessee Williams’ Cat on a Hot Tin Roof (1955). Today, I want to briefly discuss the 2008 Broadway performance of the play with an all black cast starring James Earl Jones, Phyilcia Rashad, Terrence Howard,  Anika Noni Rose, and others. While all of the actors in the Broadway performance are phenomenal across the board, I have to question having an all black cast for a play like Cat on a Hot Tin Roof. Colorblind casting has its place, but using it for a play that has, as I noted in the last post, connections to the exploitation of others, specifically African Americans, in the running of the plantation, causes some problems. 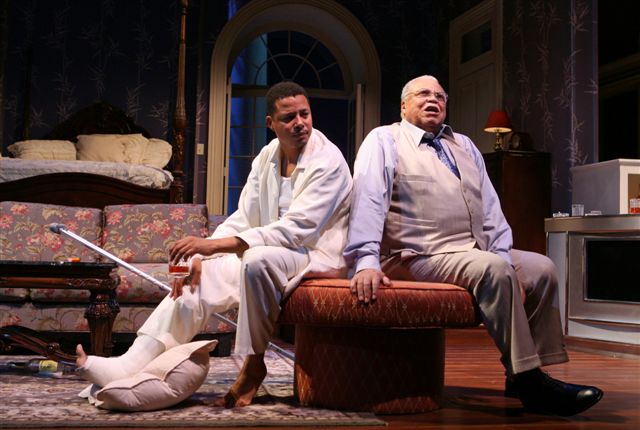 In interviews, James Earl Jones has commented that he always wanted to play Big Daddy, and to a certain extent, I can see him playing that character. Jones could portray Big Daddy, a man confronting a what amounts to a mid-life crisis on his 65th birthday and his own mortality, in a way that leaves out the racial undertones of Big Daddy serving as the overseer on the plantation in Mississippi during the early part of the twentieth century and making himself on the backs of sharecroppers. However, this seems to negate the social realities of who could own and run a 28,000 acre plantation in Mississippi during this period.

We cannot overlook the fact that African Americans did own slaves and plantations. There is historical evidence of this fact, yes. The Cane River Creole community in Louisiana is just one example who in fact owned a large amount of land in the area. Even with this in mind, we have to, and must, consider the social context of the period when the play takes place. This the same year as Emmett Till and more than five years before the Freedom Summer and Civil Rights Movement in Mississippi. Would an African American family be in this position? If so, would we still have to think about race?

Along with this information, I have to consider the case at Harvard that occurred in 2008 as well with a production of the play. When an actor had to drop out of the play, the Harvard-Radcliffe Dramatic Club contacted the Black Community and Student Theater (BlackCAST) at Harvard to see if a last-minute replacement could be found. The role was for a servant, and Williams, in the character list, specifies, “a Negro servant.”

Upon receiving the inquiry, BlackCAST president Christian Strong and co-president Andrew Coles  “were disturbed.” Cole told the Harvard Crimson, ““What we immediately found worrisome is not that this is a black servant, but the fact that this is when we get recruited. . . That I found patently offensive, that this is the only time we have been called upon to help cast a role. It made me feel like I was the clearinghouse for black talent. What are we, 1-800-Cast-a-Negro?” Coles’ response is important because he points out the problems with the production contacting BlackCAST only when they need “a Negro servant.” 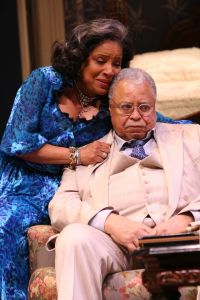 However, the question remains, can a colorblind adaptation of Cat on A Hot Tin Roof work? Obviously it did on Broadway, but should it be performed this way? Some claim that a production like this highlights the universal nature of the characters in Williams’ play. Ok, I can see that to a certain extent. Other, like Douglas Tuner Ward, author of Day of Absence and other plays,  told the New York Times, “Williams may not be overtly talking about the social environment and the context, but it is there . . . That play is not taking place in an abstract universe. It’s Mississippi in a particular time in history. Big Daddy exists because of living on the backs of people’s labor.”

Twelve years before the play reappeared on Broadway, August Wilson spoke about colorblind casting at Princeton University. In the speech, he states, “To mount an all-black production of a Death of a Salesman or any other play conceived for white actors as an investigation of the human condition through the specifics of white culture is to deny us our humanity, our own history, and the need to make our investigations from the cultural ground on which we stand as black Americans” (30-31).  Wilson continues by calling such casting an insult to the history of African American playwrights.

In the statement above, Wilson challenges the idea of using colorblind casting in plays and claiming that the play shows “the [universal] human condition.” To a certain extent, I agree with him because a majority of plays we still study from before Shakespeare and to the present focus on “white culture” pushing all others to the side. Yet, I do find there are spaces where colorblind casting can work, and should. A couple of years ago, I saw a fantastic performance of Shakespeare’s A Midsummer Night’s Dream with a multicultural cast. Did this alter the play?

Now, let’s think about colorblind casting in the context of Williams. How would the play change? How would the undercurrents work? When thinking about this, I couldn’t help but ponder what would happen if a white actor portrayed Brutus Jones in Eugene O’Neill’s The Emperor Jones. How would that change the play and the ways that we perceive it? Would a white family work a production of Lorraine Hansberry’s A Raisin in the Sun? In both of these cases, just like with Cat on A Hot Tin Roof, colorblind casting would ultimately alter the plays in significant ways. While universal themes would come through, we would lose the social milieu that encompasses the action on stage. This would be extremely detrimental to our engagements with the plays.

As I said earlier, I do see instances where colorblind casting could, and should, be implemented. There are cases, though, where the original casting should remain because of the important undercurrents that the production may remove for the audience. What are your thoughts? As usual, let me know in the comments below, and make sure to follow me on Twitter at @silaslapham.

Wilson, August. The Ground on Which I Stand. New York: Theater Communications Group, 2001.