The Ghosts of Harrow

Currently, I am working on an essay that examines Frank Yerby’s The Foxes of Harrow (1946) and the 1947 film adaptation that appeared a year after its publication. As such, I recently reread Yerby’s debut and wanted to comment on a couple of items that I noticed. Today, I want to take the time to look at the opening couple of pages in the novel. These pages serve as a sort of preface; however, they are only labeled “The Foxes of Harrow.”

In the opening section of The Foxes of Harrow, Yerby addresses the reader directly and describes the present decaying state of the once magnificent house of Harrow. It is here, within these two pages, that Yerby sets up the protest that weaves its way underneath the surface of Stephen Fox’s rise to wealth and power, and eventual downfall, in Antebellum Louisiana. The overarching theme of Yerby’s career, a deconstruction of the myths that perpetuate the Old South, arise within the first words that many readers would encounter from Yerby.

The section describes the part of the Mississippi River that flows past that silent, abandoned house of Harrow. As it meanders on its way down stream towards the Gulf of Mexico, transporting “the mud of half a continent,” the river becomes quiet in front of the once lively house, almost as if it is paying reverence to the past. The river “talks with dark voices” above and below Harrow, but it becomes deftly silent in the once great house’s presence. The “dark voices” cue us to think about the past that Harrow represents, a past built on slavery and oppression. Yerby comes back, again and again, in this section and in the novel to the role enslaved individuals played in the construction of Harrow.

Rather than viewing Harrow in the daytime, Yerby informs us that it would be better to see it at night because “[t]he moonlight is kinder.” At night, Harrow looks “magnificent,” but in he day, “you can see that the white paint has peeled off and that the doors are gone.” This disparity between observing Harrow at night or in the day carries with it ideas about the ideal, genteel, chivalric image of the Old South that exists as nothing more than shadows and light playing tricks upon the eye of the observer. At night, the luminosity of “the moon brings back the white again and the shadows hide the weeds between the flagstones.” Harrow becomes, once again, “magnificent,” but that magnificence is nothing more than an illusion tricking you through the manipulation of a low-light source and shadows.

The truth becomes apparent in the daylight when you see “the weed-choked garden,” the peeling paint, “the mud-filled birdbath [,] and the broken crystal ball.” The illusion of a grand South, represented in Harrow, becomes nonexistent because rather that appearing grandiose and pristine, it shows cracks and deterioration, presenting the true image behind the facade. Debuting about seven years after the phenomenon of the film adaptation of Gone With the Wind, Yerby was well aware of the cultural images that the film, book, and other works perpetuated about the idyllic Old South and the nostalgia that people felt about returning to this mythological creation.

After you see this image of Harrow, you begin to walk around the property. You “walk fast” and ultimately “resist” the urge to “look back at Harrow” because no lights grace the windows, no dancers appear in the halls, and the smells of magnolias, jasmine, and other plants “are ghosts too and figments of the imagination.” This section echoes Beth’s thoughts about the grand balls that infiltrate her mind at the end of “White Magnolias,” one of Yerby’s early short stories. Beth becomes intoxicated by the image of opulence, but she eventually realizes that the opulence only exists because of the labor of enslaved and oppressed individuals. (I have written about this before here.)

Like Beth, Yerby calls upon us, as readers of The Foxes of Harrow, to realize the prevalent false perception of the Old South that existed during Yerby’s career and even into our present day. The images of lights, dances, and fragrant smells are nothing more than “ghosts,” illusory images conceived by the mind with no real antecedent in reality. While Stephen Fox, Odalie, Andre, Etienne, Tante Caleen, Inch, Achille, La Belle Sauvage, and others all existed within the framework of the novel, they have passed on, and what remains are constructions of myths that only serve to maintain positions of power and subjugation. 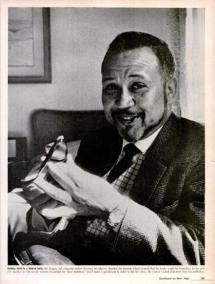 Fittingly, before we leave Harrow’s property, Yerby brings his point into focus through his description of the “brick kitchen,” a space that the enslaved Tante Caleen would occupy. After chronicling the scene, Yerby invokes Caleen’s presence: “And the ovens with the hollowed-out tops where the live coals were put still stand n the hearth waiting for old Caleen to push them into the fire to bake her master’s bread and hum softly under her breath.” Yerby directly refers to Caleen here, and she, ultimately, is the only person that appears in the first two pages by name. We do not see Harrow’s owner, Stephen Fox, his wife Odalie, their son Etienne, or any of the other white, aristocratic characters who occupy he novel. Instead, we see Caleen preparing to make “her master’s bread.” This construction places Caleen at the center of Harrow, not Stephen or anyone else. She, essentially, built Harrow by providing food for Stephen and the enslaved before the house was erected, by warning Stephen of the impending hurricane, by saving Stephen’s life, by delivering Etienne, and countless other acts.

Leaving the “brick kitchen,” we walk down the trail past the sugar mill to our boat. Notice that the big house gets passed over because you resist the “urge to look back” at it, and you make your way to the kitchen, set off from the house, and down towards the sugar mill, sites of enslavement and work. Upon reaching the boat, we start up the motor and carry downstream. If we miss Yerby’s earlier cues about the myths of the Old South, the section concludes with these simple words: “And you don’t look back.” Before we even see Stephen’s story, Yerby warns us about the prospects of remaining in the past and looking backwards.

At the end of the novel following the Civil War as Stephen and Etienne stand before a ruined Harrow, Stephen thinks about rebuilding his plantation. He thinks,

I am old. It must be left to the young men–‘Tienne and the rest. And I fear that they will look forever backward to what was. Ye can’t turn the world back again, ye must go forward. If they try to shape the world again in the image of the past, they’ll waste generations and mountains of blood and treasure in something that cannot succeed because of its very nature. If there is any one thing upon the face of the earth that is unconquerable ’tis human freedom. And if they try to take that away again from the blacks they will end up by losing themselves.

Of course, Stephen’s thoughts are prophetic, anticipating the end of Reconstruction and the start of Jim and Jane Crow. As well, Stephen’s words echo the opening two pages when they proclaim that looking backwards and trying to grasp at something that is inherently wrong and morally corrupt just to maintain authority will end in nothing but downfall, bloodshed, and decay.

I want to end by noting that I have two copies of The Foxes of Harrow. One is a first edition hardback from Dial Press. This edition contains the two pages I discuss above; however, the paperback edition I have, published, it appears, around 1959, does not begin with those two pages. It starts with Stephen Fox disembarking the riverboat because he has been caught cheating at cards. As such, how does the absence of the opening two pages alter the reading of The Foxes of Harrow? Does it alter the reading? This is not a question I can necessarily answer right now, but it is something worth considering.