Last year, I wrote about Nathaniel Hawthorne’s “The Minister’s Black Veil” and slavery. This semester, I taught the story again, and this time, I became more intrigued by the correlations between the Hawthorne’s tale and issues of race and abolitionism that circled around the nation during the period. The story originally appeared in the 1832 edition of The Token and Atlantic Souvenir; later, Hawthorne collected it in Twice-Told Tales (1837). Initially, the story appeared three years after David Walker’s Appeal (1829), one year after Nat Turner’s Rebellion (1831), and one year after William Lloyd Garrison started The Liberator (1831). Simply put, “The Minister’s Black Veil” arrived at an important moment surrounding the abolitionist movement.

Along with the contemporaneous historical events, we must also consider that Hawthorne graduated from Bowdoin in 1825. He graduated the same year as Henry Wadsworth Longfellow and he was in attendance in 1824 when John Brown Russwurm enrolled. In fact, all three men were involved in the same literary society, the Athenean Club, at the college. Russwurm, of course, went on the publish the first African American newspaper in America, Freedom’s Journal, and Longfellow was a staunch abolitionist publishing Poems on Slavery in 1842. 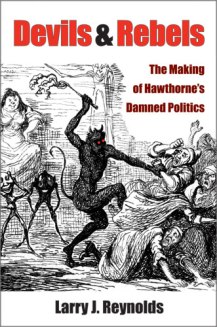 Multiple critics have written about Hawthorne’s politics and his racist attitudes, and it is not my purpose at this point to address these issues because right now, I am just now really beginning to dig into this scholarship. However, I do want to continue my exploration of the ways that “The Minister’s Black Veil” addresses issues of race, and I would posit that the tale shows Hawthorne exploring multiple perspectives on the issue. As Larry J. Reynolds notes in Devils and Rebels: The Making of Hawthorne’s Damned Politics (2008) that “Hawthorne’s most thoughtful political vision, then, is circumscription, the willingness and tendency to entertain multiple points of view.” This is what Hawthorne does with Hooper and the community in the tale; he presents a view of man that becomes ostracized from the community solely on the basis of a black veil that covers his face, a veil that symbolizes race. (Along with this reading, we must also consider the tale in relation to Hawthorne’s tensions with his Puritan ancestry.)

It is not my intention today to rehash some of the points I made in the previous post linked above. There, I write about Toni Morrison’s Playing in the Dark and Herman Melville’s Hawthorne and His Mosses. If you would like to view these for a broader context, you can do so in the previous post. Here, I plan to look at a couple of more aspects in the story that support the argument that Hooper’s veil serves as a comment on race.

Upon entering the church for his first sermon wearing the veil, the narrator describes the effects of the simple piece of crape on Hooper’s appearance and his congregation. While reading the Bible. the veil “threw its obscurity between him and the holy page” creating a barrier between himself, the Bible, and ultimately his congregation. During the service, “more that one woman of delicate nerves” had to get up and leave the service. This line, of course, plays on fears and stereotypes of Black men sexually pursuing white women. Immediately following this, the narrator states, “Yet perhaps the pale-faced congregation was almost as fearful a sight to he minister, as his black veil to them” (emphasis added). Here, we get “pale-faced” and “black” juxtaposed against one another. The congregation, with its white faces, possibly conjures just as much fear in Hooper as his black veil does for them.

Later, at the wedding, Hooper comes face-to-face with himself, and the image of himself wearing the black veil disturbs him. Raising a glass of wine, Hooper ends up “catching a glimpse of his figure in the looking-glass, the black veil involved his own spirit in the horror of which it overwhelmed all others. His frame shuttered–his lips grew white–he spilt the untasted wine on the carpet–and rushed forth into darkness.” Hooper becomes fearful of his own visage, realizing the connotations arising from its presence. In regard to race, he becomes frightened because the veil envelopes his spirit causing him to become separate from those around him.

After this incident, Hooper continually avoids his reflection in any surface. In his daily activities, “he never willingly passed before  mirror, nor stooped to drink at a still fountain, lest, in its peaceful bosom, he should be affrighted by himself.” Hooper’s apprehension of catching a glimpse of himself could be read as a psychological commentary on the ways that continued degradation and separation causes individuals to fear themselves. Hooper, by recoiling at his image, expresses self-hate in himself as the reflection causes him to become “affrighted.”

Speaking with his fiancee, Elizabeth asks Hooper why he will not remove the veil and whether or not he will remove it for her. Hooper replies, “There is an hour to come . . . when all of us shall cast aside our veils,” thus becoming one. After she asks him to remove the veil again, Hooper responds that “this veil is a type and a symbol.” It serves as a distinguishing mark in a manner such as skin color, and that mark “must,” according to Hooper, “separate [him] from the world.” Within these lines, Hawthorne illuminates that skin color is nothing more than a earthly aspect that, upon death, will become removed, thus making everyone equal. However, until that time, it serves as a barrier that keeps individuals apart based solely on the color of people’s skin.

Throughout the tale, Hooper becomes so separated from the community that no one bothers to inquire about the veil, except for Elizabeth. Rather, they remain in a state of fear, never attempting to speak with Hooper about it. In this manner, the community places a barricade between itself and Hooper based on nothing more than the black veil. This refusal to find out the reasoning behind the veil leads to suspicions and rumors that swirl around: “By persons who claimed a superiority to popular prejudice, it was reckoned merely an eccentric whim, such as often mingles with the sober actions of men otherwise rational and tinges them all with its own semblance of insanity.” Supposedly above “popular prejudice” and stereotypical views, the “superior” persons chalk up Hooper’s actions to an eccentric nature. Viewed within the context of race, “a superiority of popular prejudice” brings to mind individuals who view themselves as being above racist thoughts but still succumb to them. (I do not totally know what to make of this yet.)

On his deathbed, Hooper condemns those gathered around him who fled out of fear because of the singular piece of black crape that covered his face. He tells them,  “Tremble also at each other! Have men avoided me, and women shown no pity, and children screamed and fled, only for my black veil? What, but the mystery which it obscurely typifies, has made this piece of crape so awful?” Their actions have caused them to sin because they allowed the piece of crape to hinder them from getting close to Hooper. Thus, as Hooper informs them before he draws his final breath, “on every visage a Black Veil!”

Ultimately, we need to consider “The Minister’s Black Veil” as Hawthorne’s attempt to view race from multiple perspectives. In essence, through Hooper, Hawthorne writes a Black character without using blackface. I say this based on Hawthorne’s time at Bowdoin and the events occurring contemporaneously with the initial publication of the tale. As well, I argue this because Hawthorne had connections with Russwurm, and he saw, perhaps, firsthand, the ways that people’s perceptions affected their interactions with each other. In Horatio Bridge’s Personal Reflections of Nathaniel Hawthorne (1893), he writes that Russwurm’s consciousness about his color affected his interactions with Hawthorne, Bridge, and others: Ruswurm “lived at a carpenter’s house, just beyond the village limits, where Hawthorne and the writer called upon him several times, but his sensitiveness on account of his color prevented him from returning our calls.” Perhaps Russwurm’s “sensitiveness,” compounding with other factors, led to Hawthorne penning “The Minister’s Black Veil.”

What are your thoughts? Let me know in the comments below. Make sure to follow me on Twitter @silaslapham.