Ever since I first encountered Edgar Allan Poe’s “Hop-Frog, or the Eight Chained Ourang-Outangs,” I became intrigued by the issues Poe addressed through this Gothic story that takes place far away from American soil. The story first appeared in 1849, and we can read the story in an autobiographical manner, as some scholars have done. However, I would argue that we must also read the story in relation to White’s fears of Black insurrection and rebellion. We must remember that Herman Melville’s Benito Cereno, a Gothic text squarely focused on the issue of slavery, appeared only six years after Poe’s story, and Frederick Douglass’ The Heroic Slave only three years after. Both of these texts, of course, focus on slavery and revolt. How does “Hop-Frog” fit into this discussion? Why should we read it in relation to texts such as Melville’s and Douglass’?

First and foremost, we must realize that, as Robert K. Martin notes, the Gothic, at its core, “is most often a politically conservative form that gives expression to the anxieties of a class threatened with violent dissolution.” Thinking about the antebellum period, this fear encompasses the story of Hop-Frog, a slave who, taken from his homeland, enacts revenge on the king and his court. Along with the anxieties, the “Gothic can allow for the voice of the culturally repressed and hence act out a resistance to the dominant culture” as it does in works such as Sherley Anne Williams’ Dessa Rose, Toni Morrison’s Beloved, Octavia Butler’s Kindred, and other texts.

Along with considering the anxieties that the Gothic thrives upon, we must also consider Morrison’s discussions about the sometimes subsumed “Africantist presence” that inhabits American literature. Morrison examines this in Poe’s The Narrative of Arthur Gordon Pym on Nantucket, and Lesley Ginsberg does the same with her reading of Poe’s “The Black Cat.” Writing about the story, she argues that “The Black Cat” “invokes other discourses central to the 1830s and 1840s, including its rehearsal of the pet abuse so often featured in the antebellum child-rearing manuals and its repetition of the obsessive pitting of black against white, dependency against freedom, and animal against human which fueled contemporary debates over chattel slavery and social reform.”  Appearing almost six years after “The Black Cat,” Poe’s “Hop-Frog” continues these sames themes that roam underneath the surface and pull on the readers’ fears that their position will ultimately succumb to revolution.

When I taught “Hop-Frog” a couple of weeks ago, I began by sharing with students this passage. (I did not tell them where it came from or who wrote it.)

It will thus appear, that whilst every thing upon the surface of society wore a calm and peaceful aspect; whilst not one note of preparation was heard to warn the devoted inhabitants of woe and death, a gloomy fanatic was revolving in the recesses of his own dark, bewildered, and overwrought mind, schemes of indiscriminate massacre.

After having students read the passage, I asked them who possibly wrote it. I did not receive any responses. Then, I asked if the passage carries with it any elements of the Gothic. To this, they responded that it does, especially in it description of “a gloomy fanatic” that sought to disturb the “peaceful aspect” of the community. Next, I asked them if Poe may have written something similar, and some thought that he may have in fact written something like the above passage.

Poe did not write he above passage; in fact, it does not even appear in a “Gothic” text. Rather, it comes from Thomas Grey’s preface to The Confessions of Nat Turner (1831). After “massacre,” Gray has “to the whites.” I intentionally left this part out so as not to sway the students’ perspectives. Ginsberg begins her essay on “The Black Cat” by noting the language the papers used to describe Nat Turner’s rebellion. The word choice and tone invoke the Gothic in its descriptions of dark and ominous rumblings that seek to disturb the tranquility of the white population. The Richmond Enquirer even labeled the Nat Turner’s men “Banditti,” a term derived from the Gothic genre. We must think about “Hop-Frog” in relation to fears surrounding slave revolts, especially considering that it appeared the year after the end of the Mexican-American War and seven years after a slave revolt in the Cherokee Nation. 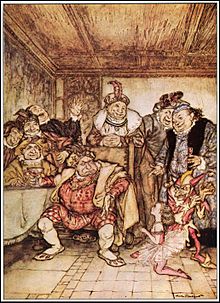 From the outset of the story, we see Hop-Frog as nothing more than a slave and entertainment for the king and his court. He embodies the stereotype of the happy, jovial slave as the king’s jester (fool), but he also embodies the machinations of rebellion just beneath the surface. We know Hop-Frog is a slave because the narrator cannot “say, with precision, from what country Hop-Frog originally came” because him and Trippetta “had been forcibly carried off from their respective homes, and sent as presents to the king.” Hop-Frog and Trippetta arrived in bondage, as slaves, as gifts, from an unknown “barbarous land” to entertain the king.

When they arrived, the king named his new slave Hop-Frog, “on account of his inability to walk as other men do.” The fact that the king confers a name upon Hop-Frog and that we do not know where him and Trippetta hail from points to them as being representative of Black slaves brought for the sole purpose of entertaining and working for the king. Along with this correlation, Poe describes Hop-Frog in grotesque and animalistic terms, drawing upon stereotypical images of Blacks that compared individuals to primates such as monkeys or orangutans. Hop-Frog “resembled a squirrel, or a small monkey,” and he moved the agility of one as well while “scrambling over the heads of the crowd” at the end of the tale. Add to this his “fang-like teeth,” and Hop-Frog becomes less a human and more of an animal in his characterization.

In conjunction with the description of Hop-Frog, Trippetta appears similar to an enslaved female as well. While there is no explicit comment about the sexual predation of the king towards Trippetta, this becomes implied partly in the way Poe presents her. Poe describes Trippetta in relation to Hop-Frog, both are dwarves, but he adds in a parenthetical, she had “exquisite proportions, and [was] a marvelous dancer.” These two almost innocuous descriptors make me think of Sarah Baartman and other stereotypes. 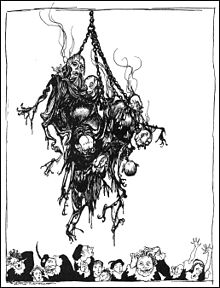 Hop-Frog’s act of vengeance occurs after the king causes him to drink too much, a scene that relates to Edwin Epps in Northup’s Twelve Years a Slave (1852) when he calls upon Northup and the other slaves to dance and perform for him even when they are tired and must awake early the next day. (Even though Northup is later, the correlations warrant at least a comparison.) Hop-Frog plans to have the king and his ministers blacken themselves, dress up as orangutans, and have the chained together. They will appear during a party at the palace, chained together as if they “have escaped, en masse, from [their] masters.” The scene, according to Hop-Frog, will hopefully invoke fear among the revelers, particularly the women.

At the party, everyone becomes scared, and Hop-Frog catches the eight men in the middle of the room. He links their chains to the chandelier then raises them up in the air. To calm the crowd down, he tells them he will discover who the masked men are, so he climbs up onto the chandelier and shines a light in the faces of the king and his ministers, lighting them on fire. They become “a fetid, blackened, hideous, and indistinguishable mass” dangling in the air as Hop-Frog and Trippetta escape.

On top of descriptions of Hop-Frog and Trippetta, the plan that Hop-Frog conjures up plays upon the same fears of slave revolt. In this manner, there is a double fear that permeates the story. Hop-Frog, of course, is at the forefront because he revolts against the king and his ministers. However, the king and his ministers also become representative of slaves as well. They enter as stereotypes, chained together as if in a coffle, and appear as escaped slaves to scare the party goers. I am still trying to work through this aspect, but it is something to think about.

If you want to read more on this topic, see Ronald Gottesman’s “‘Hop-Frog’ and the American Nightmare.” What are your thoughts? Let me know in the comments below. Make sure to follow me on Twitter @silaslapham.