In the last post, I wrote some about how Frank Yerby and Claude McKay each challenge western ideals of beauty. Today, I want to continue that discussion by looking at how Bita Plant interrogates these ideals in Banana Bottom, specifically when she looks at William Blake’s “The Little Black Boy” (1789). As Bita looks at herself in the mirror and Marse Arthur’s words–“Only a nigger gal!”–reverberate in her head, she dismisses Arthur’s words and illuminates her self-worth: “For she knew that she was a worthy human being. She knew that she was beautiful.”

Turning to the bookshelf, Bita removes a collection of William Blake’s poems and turns to one that Squire Gensir “had once read to her, finely without comment.” The poem that she turns to is “The Little Black Boy,” and the poem appears in its entirety within the novel. By using the entire poem instead of specific lines, McKay calls upon readers to take the time and dissect the poem. Before the poem appears, Bita does not make any comment about its meaning. However, after the poem, Bita explicates the poem, connecting her reading to the thoughts she had while standing in front of the mirror. 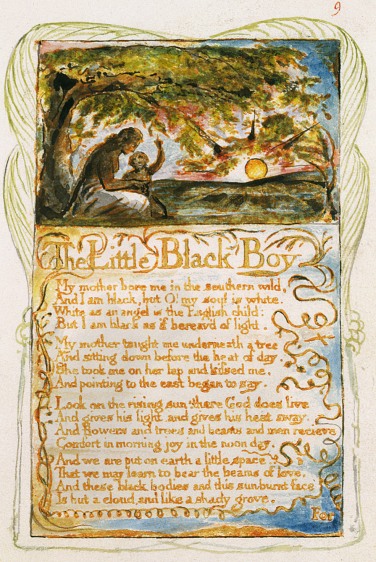 We could read Blake’s poem as a unifying message that once this physical life is over people will become united with God in heaven. That reading is optimistic, and it does appear in the poem. However, that reading continues, as Robert Dale Parker notes when writing about Postcolonial theory, to buttress western “standards for art and literature as if they were universal and simply natural rather than culturally specific and constructed.” Bita takes note of the ways that “The Little Black Boy” reinforces western ideals of beauty and works to dismantle them as she thinks about the poem.

“Lying naked on the bed,” Bita considers the poem “splendid,” yet she also thinks that Blake’s poem should not “be recommended to an impressionable black child.”  Why does she think this? Consider the Harvest Festival and the lozenges from the last post. There, all of the messages correlated to white ideals of beauty, eschewing the beauty of those who received the lozenges. What message does that send to a person? Earlier in the novel during an Anniversary Service, Bita hands out books as prizes to the children. She looks at the books, each of which contains Biblical tales and tales “of the perils of fisher-folk life on the Cornish coast” or “of Alpine drifts and Saint Bernard Dogs.” While the tales may be morally acceptable, they do not, as Bita thinks, contain representations “for little black and brown readers.” Again, what do these children think when the idealized beauty and morality found in the books is white?

The first stanza of Blake’s poem presents “white” as the ideal even though the overall poem works to show that the ideal is universal love and acceptance.

My mother bore me in the southern wild,
And I am black, but O! my soul is white;
White as an angel is the English child:
But I am black as if bereav’d of light.

Here, the narrator equates “white” with one’s soul, something that even Christian ministers did. Some believed that once a Black person became a Christian the person’s skin would lighten. Writing about Cotton Mather, Samuel Mather noted that as his father walked the streets “he still blessed many persons who never knew it, with Secret Wishes,” and he would pray, “Lord, Wash that poor Soul; make him white by the Washing of thy SPIRIT.” Mather’s equation places white as clean and redeemed and black as something that needs cleansing. Blake does the same thing in line two when the narrator states, “O! my soul is white,” and in the following two lines when he describes the English child as “White as an angel” and himself as “bereav’d of light.”

The boy’s mother points to the sun, a metaphor for God, and suggests that she and her son are closer to God because of their “sun-burnt faces.” In the final stanza, the narrator states that he must “shade” the English boy from the heat until he can bear it. Blake’s comment is that the English boy, by supporting slavery, cannot be close to God because he do not love his neighbor as he loves himself. Thus, he would perish in the sun. The black boy, however, does not need to be shaded, and because of this, he can shield the English boy and bring him to God where they will each be free of the black and white clouds respectively “And round the tent of God like lambs” come together in the presence of the Almighty.

Thinking about the poem, Bita questions the implications of the narrator wanting to be like the white child: “For it was murder of the spirit, she reasoned, to cultivate a black child to hanker after the physical characteristics of the white. Rather teach it to delight in its own created self upon the earth, in heaven–and in hell.” Bita’s experiences in England and her relationship with the Craigs have shown her the importance of representation. She could have chosen to deny her past and take on western ideals of beauty, but instead, she affirms her own community and ideals, even brining in artists such as Blake and Beethoven. After she thinks about the narrator wanting to be like the white boy, she immediately praises Blake for his eloquence and passion.

At the end of the chapter, Marse Arthur’s words return to Bita’s mind, and they fly around “like a little poisonous insect buzzing around a fine healthy body and seeking some vulnerable spot into which it can inject its venom.” This is the same way that the book prizes and the messages on the lozenges act. They fly around, find a target, and light upon the psyche injecting poison into the brain. Bita overcomes the annoying buzz and bursts out into “gales and torrents and storms of laughter until it was scared and vanished to hell away.”

Bita’s affirmation of her identity counteracts Priscilla Craig’s plans for Bita to become an exhibit of “civilizing” the backwards inhabitants of Banana Bottom and Jubilee. However, Bita does not allow this to happen. Instead, she embraces her true self, denying western ideals to overtake her identity. Ultimately, she allows for a melding of European and African cultures, and there are multiple moments where this melding becomes apparent. What is key here, though, is that she constructs her own identity and ideals of beauty. She does not allow Priscilla Craig or others to dictate what she should consider beautiful or not.

What are your thoughts? Let me know either in the comments below or on Twitter at @silaslapham.