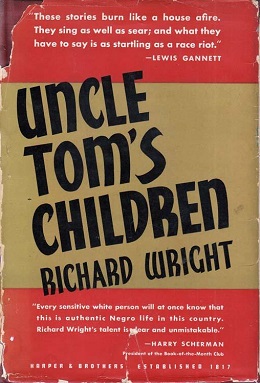 Richard Wright’s Uncle Tom’s Children originally appeared in 1938. Two years later, Harper Collins reissued Wright’s collection of stories, adding the final story, “Bright and Morning Star,” and the autobiographical essay, “The Ethics of Living Jim Crow,” at the beginning. Along with these two additions, the 1940 reissue contains two epigraphs. The first comes directly before “The Ethics of Living Crow.” Here, Wright provides a clear commentary on the death of the Uncle Tom stereotype. The epigraph reads, “The post Civil War household word among Negroes–‘He’s an Uncle Tom!’–which denoted reluctant toleration for the cringing type who knew his place before white folk, has been supplanted by a new word from another generation which says:–‘Uncle Tom is dead!’” Coming at the very beginning, this epigraph provides a context for the stories in Wright’s collection. Instead of displaying stereotypical African Americans who bow and acquiesce to whites and have a lack of identity, his characters display life beyond the kitchen, houses, and fields of Dilsey and others.

While the first epigraph warrants examination, I want to take a moment to look at the second one. This epigraph appears immediately before the first story in the collection, “Big Boy Leaves Home.” Instead of providing a statement of protest as he does with the first epigraph, Wright inserts lyrics from a popular song.

Written in 1936 by Gerald Marx, Irving Caesar, and Samuel Lerner, “Is It True What They Say About Dixie” presents an idyllic image of the South that Wright’s stories systematically dismantle by showing that the region does not provide a place of refuge and respite for all.. For this post, I want to briefly look at this song and also at the songs in “Big Boy Leaves Home.”

Being from the South, the lyrics to the song create a certain image and feel that elicit a mood of nostalgia; however, the subtext, much like Twain’s “The War Prayer,” says a lot. While the song does not mention race, a cursory Google search pulls up some interesting results. Searching for information on the song, I discovered that numerous artists have performed “Is It True What They Say About Dixie,” and the first singer that appears on a Google search is none other than Al Jolson, a man who performed in blackface during his career. Al Jolson’s appearance at the top of the list makes me think about what lies beneath the surface of the song. Dixie appears as a place where the sun always shines, the magnolia’s always blossom. people eat their fill, and time seems to fade away, leaving a pastoral land behind where one can escape the quick-encroaching modernity of the twentieth century.

Three years after “Is It True What They Say About Dixie,” Billie Holiday recorded Abel Meerepol’s “Strange Fruit,” a song that directly speaks against racism and lynching. While the former song speaks ideally of the South, the latter illuminates the hidden aspects of life in the South for African Americans. The “gallant South” becomes grotesque and murderous as the “sweet and fresh” smell of magnolia trees that tickle the olfactory system get overwhelmed by the suffocating odor of “burning flesh” that dangles from the limbs. Just as “Strange Fruit” dismantles the bucolic image of the South, Wright’s short story collection does the same.

“Big Boy Leaves Home” provides a clear example of the pastoral existing as a place where African Americans cannot survive. Big Boy and his friends want to go swimming; however, to do this, they must swim in water that is on a white man’s land, causing them to endanger themselves if someone catches them. While swimming, a woman and man enter the area and the boys try to escape. Unable to flee undetected, the white man kills two of the boys before Big Boy wrestles the gun from him and shoots him dead. The remainder of the story sees Big Boy and Bobo plotting their path to the North. Before the two can leave, Bobo gets caught and lynched right before Big Boy’s eyes.

During the lynching scene, the men and women gathered begin to sing a song. While Wright presents the entirety of the African American songs sung earlier in the story, he only provides one line of the song sung by the white mob: “We’ll hang ever nigger to a sour apple tree . . . ” (54). The ellipses, of course, indicate that more exists to the song. I could not find the lyrics or title, though. (If you know what song this is, please let me know in the comments below.) The line from the song appears twice in the story, and the second time sees everyone singing, women included: “There were women singing now. Their voices made the song round and full. Song waves rolled over the top of the pine trees. The sky sagged low, heavy with clouds” (55). Unlike the earlier songs, the one the mob sings creates fear and dread in Big Boy and Bobo; it indicates a rupture of the pastoral, lacing the landscape with blood.

As usual, there is more that could, and should, be discussed here. For further information on lynching and the fight against it during this period, see “The Specter of Lynching” on the Ernest J. Gaines Center’s blog. What are your thoughts? Let me know in the comments below.