Last Thursday, I wrote about the “blank spaces” in William Faulkner’s “Dry September” and some works by Ernest J. Gaines. Today, I want to look at a couple of scenes in Faulkner’s story and discuss the ways that Faulkner delves into the psychological effects of lynchings and racial violence on the perpetrators themselves. As such, I will briefly discuss Minnie Cooper and John McClendon along with Paul Cadmus’ To the Lynching! (1935), a lithograph that Cadmus created for the NAACP’s 1936 exhibit An Art Commentary on Lynching. 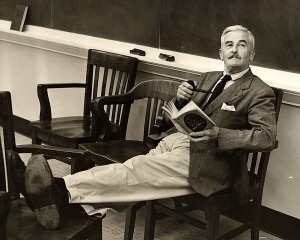 “Dry September” revolves around a mob lynching Will Mayes for his “supposed” sexual interaction, consensual or not, with Minnie Cooper. Minnie accuses Will of raping her; however, the “blank spaces” within the text, along with other contextual clues, lead the reader to believe that Minnie lies about Will. In fact, we see her mental breakdown, I would argue, after she realizes the repercussions of her accusations lead to Will’s death at the hands of McClendon and the lynch mob. This breakdown occurs when Minnie’s friends take her out on the town, hoping to get the inside scoop about what happened between her and Will.

As they walk towards the town square, Minnie’s companions continually ask her about what happened, and she starts “to breathe deeply, something like a swimmer preparing to dive, until she cease[s] trembling” (445). Even as they continue, with her in the middle of the group, she appear “fragile in her fresh dress,” and she begins to tremble again when she hears people at the drugstore talking about her and Will (445). One person asks, “What did they do with the nigger? Did they–?” Before the questioner finishes, the reply arises, “Sure. He’s all right. . . . He went on a little trip” (446). The connotation here is evident, and Minnie overhears Will’s fate.

When the group makes its way to the movie theater, Minnie hopes that she will calm down when the film begins; however, as couples enter and the screen starts to glow, she uncontrollably begins to laugh, causing her friends to remove her and take her home. They calm her down and ponder if anything actually happened between her and Will, concluding the section with, “Poor girl! Poor Minnie!” (446). While the women may think that something atrocious occurred between Will and Minnie, her breakdown comes about because she realizes that her ploy for recognition from men and the rest of the community cost Will his life. In this manner, I can’t help but think about Paul Laurence Dunbar’s “The Tragedy of Three Forks,” even though that story does not focus on an interracial relationship.

In the final section, we see John McClendon coming home after murdering Will. The interaction between John and his wife resembles the interactions that Gwendolyn Brooks portrays in “A Bronzeville Mother. . . ” and that James Baldwin presents in “Going to Meet the Man.” Upon entering the house, John realizes his wife has stayed up until he got home. Immediately, John accosts her, questioning why she remains up waiting for him to return. She begins to respond, but he does not allow her. Instead, he walks up to her and fiercely grabs her by the shoulder, causing her to plead, “Please, John. You’re hurting me” (447).

John’s actions cause him to violently react to his wife. He does not separate what he did to Will and his home life. The viciousness with which he enacted “justice” seeps over into his relationship with his wife, causing it to become strained. The story concludes with John stripping in his bedroom, “body presses against the dusty screen [door]” (447). The final line even invokes the mental darkness that the lynching of Will causes within John, Minnie, and I would even argue Hawkshaw: “The dark world seemed to lie stricken beneath the cold moon and the lidless stars” (447). Here, the world becomes “dark” and “cold,” representing alienation and isolation.

Minnie’s and John’s psychological reactions to Will’s murder highlight the ways that act affects the perpetrators of the crime in varying ways. Paul Cadmus’ To the Lynching! presents another psychological effect, one of grotesque racism and bigotry that engulfs the very being of an individual. Like Marsh’s This is her first lynching. . ., Cadmus’ lithograph presents the lynch mob with grotesquely distorted features and visages. The man at the top left looks ghoulish, and his hand takes on the characteristics of an animal’s claw. The man’s face at the bottom appears to reverse stereotypical images of African Americans with his mouth, and the man’s hands on the right again look like claws or talons gouging at the eyes of the victim. Margaret Rose Vendryes comments on the framing of the image:

To the Lynching! situates the viewer on top of the scene. We are drawn into the confusion, where the figures are disturbingly identical in color. Cadmus’s willingness to pull the viewer in so close might be a sign of his awareness that the majority of those who would visit the exhibition would be white. The triangle of white men, in their freedom, are the ones to be feared. (164)

This is the same technique that Faulkner, Gaines, Baldwin, and others deploy. They place the white reader inside the chaotic absurdity of the situation, turning a mirror back at the viewer to implicate inaction and complacency. For me, Hawkshaw becomes the epitome of this in “Dry September.” Even though he condemns the lynching, he does not completely act. Rather, he gets out of the car as the mob careens to their designated spot of ritual violence.

This is a topic that intrigues me, and it is one that I have been thinking about for a while. What are your thoughts? Ideas? I would like to expand these ideas and think about them in a broader manner.  As usual, let me know in the comments below, and make sure to follow me on Twitter at @silaslapham.