Refuting Europe in “Rosa, or American Genius and Education” 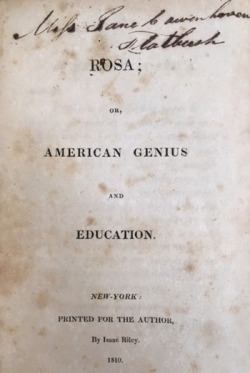 Over the past few class sessions, we have looked at Rosa, or American Genius and Education (1810). Published anonymously, the satirical novel presents an interesting examination and discussion for my early American literature survey course. There is a lot that can be looked at in regards to this novel; however, today, I want to focus specifically on the Peruvian Sol who enters the narrative mid-way through the text in chapter four and plays a significant role in the novel’s progression. Specifically, I want to look at his lengthy speech in chapter four in front of a committee in London who wanted to answer the question, “[W]hether the natives of the American continent are as acute and vigorous in their intellect as the natives of Europe, and whether they are as susceptible to mental improvement?”

Before arriving in London in the 1780s, Sol migrated from Peru to the American colonies to assist with the American Revolution because he despised “the whole race of Europeans.” During the war, he fell into the service of Mr. Robert Charmion, and upon Charmion’s death in transit as a prisoner to England, Sol committed to take care of Charmion’s daughter. There are more aspects to the plot, but for now, I want to leave these aspects alone and focus entirely on the way that Sol, who “claimed kindred with the race of Incas” and royal ancestry, responds to the London committee’s inquisition. 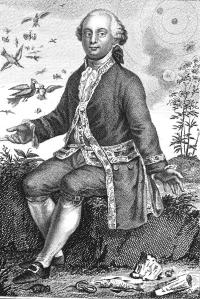 Sol’s initial replies to the committee’s inquires rattled their minds on “the doctrine of American inferiority.” This belief, that the New World, and America, were inferior to Europe had a vocal supporter in Georges Louis Leclerc, Comte de Buffon, the man who Thomas Jefferson rebuked in Notes on the State of Virginia.  According to Bruce Dain, Buffon held that “Native Americans–although still human because they could breed with Old World men and women who migrated to the New World and degenerated there” showed the same “weakness and immaturity” as the flora and fauna of the New World.

Sol’s answers, and his speech, refute Buffon in the same manner that Jefferson attempted to do in Notes. During the initial interview, Sol “surprised” the committee with his knowledge of “European literature.” After the initial queries, Sol turns the tables and points out that his inquisitors would probably “wish to ascertain the worth of [his] mental qualifications,” and by extension the qualifications of his “countrymen in general.” At this point, Sol launches into a close to three page speech highlighting his “mental qualifications.”

Sol opens by criticizing the historical record, especially zeroing in on the fact that “the Europeans . . . themselves compiled” America’s history. In this manner, we see a precursor to the works of activists like David Walker and William Apess who both challenge the historical record and its validity: Walker through the narrative of the American Dream and Apess through the elevation of King Philip standing beside Washington in the pantheon of great men in America.

As a corrective to the historical accounts on “the Europeans,” Sol presents the committee with a list of individuals who aided and also resisted European colonizers. Sol begins with Guacanahari, a sovereign of Hispaniola who exhibited “unshaken fidelity” towards the “invader” Columbus. Sol’s use of the term “invader” for Columbus, again,  foreshadows the language of Walker and Apess during the 1830s. Sol then moves on to Hautey who resisted Spanish encroachments in Cuba and to an image of “gallant youths” who threw themselves off of towers to resist Cortes; Sol notes that in these instances “[we] find the most fervent spirit of patriotism.” Again, this framing appears throughout the writings of Native American and African American activists of the early to mid-nineteenth century.

Like Walker and Apess, Sol continues by noting that there were groups in Europe that did not appear to be “civilized.” Due to the “uncivilized” European tribes’ lack of access to navigation, Greece and Rome “had flourished and fallen” while the Tartars and other tribes wandered around “uncivilized.” When they had the opportunity to learn and advance, they did. Sol then maneuvers to note that European countries practiced human sacrifice, a claim that Europe used to disparage Native Americans; however, Sol continues by noting that having individuals die in war is not that much different except that “the latter [individuals] are presented at the shrine of ambition.”

Sol then asks if Europe views him and his countrymen as inferior because Spain subdued them, but he counters this by pointing out that Europe has moved from “the Romans, the Saxons, the Danes, and the Normans.” He then posits if Europeans view him as inferior because he lacks a form of government, refuting this point as well. The key question comes next when Sol asks, “Is it because we did not rival the arts and sciences of Europe?” To this, Sol replies that it takes time to “civilize” and that the people had not had the same length of time as Europeans, but he also points out that “in the art of writing we had advanced as far as the use of the hieroglyphic.” In the Enlightenment, the appearance or absence of a written language showed whether or not community was “civilized.” Sol shows, through the “hieroglyphic,” that the people of America were “civilized” through their use of a printed language.

Sol follows these questions and answers up by referencing the oratorical eloquence of Logan, a speech that Jefferson writes down in Notes as a refutation of Buffon, and the chastity of Pocahontas. In this way, Sol counters the stereotypical image of Native Americans as  savage and uncivilized. He concludes by telling his inquisitors:

Change, therefore, your ideas respecting America: acknowledge, that if she was not as far advanced as Europe in civilization, it was not for want of capacity, but for want of time; and that the Americans were not more savage or barbarous at the era of their discovery by the Spaniards, than the Europeans were at the same age.

The “dumbfounded” committee showered Sol with gifts, claiming “he was a true specimen of American intellect.”

There are a couple of aspects that I want to briefly mention before concluding. First, notice that Sol uses the term “Americans” in his concluding remarks and throughout. The use of “Americans” appears ambiguous. It is my inclination to say that Sol uses this term specifically to refer to Native Americans, and when I use that term, I am referring to individuals across the New World because we must remember that Sol is from Peru. In this manner, what Sol is doing is something very akin to what Apess would do close to twenty years later.

Linking Sol’s speech to Apess is not that far of a stretch. As Duncan Faherty and Ed White note in the introduction to Rosa, M. Carey and Sons reprinted the novel in 1836, six years after the Indian Removal Act, a year after the Treaty of New Echota, the same year as Apess’ Eulogy on King Philip, and two years before the Trail of Tears. Now, while we do not, as of yet, know about the reception of the reprinting, we can assume it had some impact on the debates surrounding Indian Removal, and I would add, slavery. The language and rhetorical exploits of Sol fit right in with works by Apess, Walker, Lydia Maria Child, Elias Boudinot, Hosea Easton, and others.

I am curious to know who the author of Rosa actually was. Perhaps that is something we will discover someday, and I think that that discovery may shed some light on Sol as a character and his removal, at least in my opinion, from the satire laden narrative that surrounds his story.

1 Comment on “Refuting Europe in “Rosa, or American Genius and Education””