Looking at Court Cases in the Composition Classroom?

Note: Featured image is George McLaurin in class at the University of Oklahoma.

At the end of each semester, I look back and reflect upon what worked throughout the course and what could possibly go better. Part of this examination involves considering what assignments and readings to incorporate into the upcoming semester. Today, I want to discuss the tweaks I made this semester in regard to readings. Essentially, the bones of the course remain the same: two rhetorical analysis essays and an argumentative essay. As well, I retain the theme for the course: education. What I change, periodically, is the epidermis of the course, the readings, and I do this based on what topics students have written about over the sixteen week course.

This semester, I zeroed in on three topics that students have researched and written about over the past few semesters that I have taught the second composition course at my current university. Since we focus on education, I have had students write about nutritious food options on campus, the role of grants in university budgets, active learning in nursing classes, and other interesting topics. While these topics appear, there are some that pop up again and again, and these are the topics that I chose to focus on this upcoming semester. Multiple students have written about students’ rights, specifically with regard to dress codes and cyberbullying, school segregation, and whether or not college athletes should receive some form of monetary compensation (pay).

Taking these topics into consideration, I started to think about ways to focus on them throughout the course of the semester What I decided was that since we write three essays over the course of the semester I would break up the topics and cover one for each section. As well, I started to think back to a course I took in the fall on higher education law. There, we covered cases that touched on each of these topics. Some of the cases that we covered also appeared throughout the research that the students conducted on their topics and the students ended up discussing some of them in their essays as well. With this in mind, I am framing the discussions of these topics around court cases and academic articles.

For the section on students’ rights, I decided to have students look at Tinker v. Des Moines (1969), a case where the Supreme Court ruled that students do not “shed their constitutional rights to freedom of speech pr expression at the schoolhouse gate.” Students who have written on school dress codes and cyberbullying have both encountered this case in their research, so I looked for a couple of articles that discuss the case in relation to these topics. Natalie Smith’s “Eliminating Gender Stereotypes in Public School Dress Codes: The Necessity of Respecting Personal Preference” goes through dress code cases beginning with Tinker and looks at the ways that the cases have shaped and continue to shape dress codes in relation to students’ “personal preference” and “self-identity.”

For cyberbullying, I chose Stacie Stewart’s “A Trade-off that Becomes a Rip-off: When Schools Can’t Regulate Cyberbullying.” Stewart’s language and rhetorical maneuvers provide a good text for students to rhetorically analyze as they work towards their own rhetorical analysis in their major essays.  The fact that the article also discusses Tinker in relation to cyberbullying provides another avenue for students to see the connections being made between the Tinker case, which does not deal with cyberbullying, a problem that has arisen with the advent of the digital age.

Moving on to school segregation, I decided to go with three cases: Sweatt v. Painter (1950), McLaurin v. Oklahoma (1950) and Brown v. Board of Education (1954). I chose these three cases for various reasons. I chose Brown because of its importance in leading to school integration at the K-12 level and because the majority of the students in the class are freshmen still matriculating from high school. As well, there is a continued school segregation in K-12, and I want students to realize that even though Brown legally did away with it, there is still what individuals call “de-facto” segregation. As such, I plan to have students read Nikole Hannah-Jones’ “The Resegregation of Jefferson County” to highlight for students the ways that segregation continues to exist. 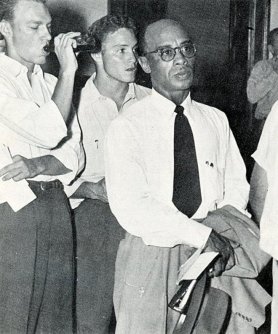 The Sweatt and McLaurin cases both focus on segregation in higher education, Sweatt at the University of Texas Law School and McLaurin at the University of Oklahoma.  I chose these to show students that segregation in higher education was just as much a problem as it was in K-12 and that there are still cases and issues regarding this topic that continue to rise up. Most notably, Fisher v. University of Texas and two cases at the University of Michigan argued that the schools denied Fisher and the other students admittance because they were white. For these cases, students will read Julian Vasquez Heilig’s “Actuating Equity: Historical and Contemporary Analyses of African American Access to Selective Higher Education from Sweatt to the Top 10 Percent Law.”

The final section focuses on student athletes and pay. Here, I could have chosen to have students read cases such as O’Bannon v. NCAA or Keller v. Electronic Arts, Inc.; however, I opted to not have students read these cases because they are lengthy and pretty intricate. Instead, I an having students read Kleinknecht v Gettysburg College (1992), a shorter case that is pretty straight forward. The case involved Drew Kleinknecht, a lacrosse player at Gettysburg College that died during a fall practice due to an unforeseen medical condition. The case centered on whether or not the college owed Kleinknecht a duty of care, and the court ruled that it did because Kleinknecht, as a lacrosse player, was serving as a representative for he university. Essentially, they claim that Kleinknecht is an employee of Gettysburg College.  (I am still looking at what readings to have for this section, but I am narrowing it down.)

Students will read the case briefs for the above cases mentioned, and I do not expect the students to comprehend everything they read here. However, I made sure to choose cases that were pertinent and easy to follow to cut down on confusion with legal vocabulary and terms. As such, I am hoping that students can get the gist of the cases and the court’s decisions without much trouble. After that, I am hoping that students will come to an understanding of the cases that have shaped education at various levels and in various ways. In conjunction with this, I want students to see the ways that scholars use these cases in their own research and arguments.

Have you done something like this in a composition or literature course? If so, what were the results? What are your thoughts?  Let me know in the comments below or on Twitter: @silaslapham.