Last post, I wrote about Michael Collins in Dwayne McDuffie’s Deathlok, today, I want to continue that conversation by discussing, briefly, Collins’ use of W.E.B. DuBois’ Double Consciousness when describing his identity. Michael’s quoting of DuBois is a direct continuation of his conversation with Misty Knight as the two talk in her apartment. Through these conversations, Michael and Misty Knight both navigate a world that constructs them as oppositional to the hegemonic society, as individuals, and things in the case of cybernets, to be feared.  Lysa Rivera, in “Appropriate(d) Cyborgs: Diasporic Identities in Dwayne Mcduffie’s Deathlok Comic Book Series,” draws upon Franz Fanon to explore the ways that McDuffie uses Deathlok “to allegorize African American ‘diasporic’ identity formation.”

In a 2010 interview, Evan Narcisse asked McDuffie about Deathlok‘s “allusions to the black experience,” specifically asking him whether or not the conversations between Michael and the computer and Michael’s riffing on “the twoness that W.E.B. DuBois spoke about” were in the pitch for Deathlok. McDuffie responded by stating that the inclusion of these discussions, and of DuBois, were intentional; however, they were not in the pitch to Marvel. What was in the pitch, as Rivera notes, was Michael’s pacifism and his desire to not kill anyone, not even those who had done harm to others.

McDuffie continued by saying, “Invisible Man was, and still is, my favorite novel. I’d just read The Souls of Black Folk and was explicitly thinking about Skip Gates’ The Signifying Monkey. Godel, Esher, Bach and Derrick Bell’s dialogues about race and law sort of crashed in my head. Deathlok was a way of sharing some of my thoughts about all of this.” McDuffie’s comments clearly highlight the intellectual tradition that him and Greg Wright were working within during their tenure at the helm of Deathlok. While not completely new within comics, the incorporation of discussions on identity from a Black perspective with the integration of DuBois created a space for Black readers to identify more closely with Michael but also as a way for white readers to think about race and identity.

Don McGregor, in “The Panther vs. The Klan” from 1976, works to try and get readers, specifically white readers, to identify with T’Challa and to see the “twoness” that DuBois discusses; however, his implementation falls flat because the scene within the Georgia grocery store oozes with quintessential racial overtures and plays like a superhero, action adventure romp. Part of what hinders this scene is the fact that T’Challa wears his Black Panther costume in the store, and this plays up his position as a hero/Avenger, not as a Black man trying to navigate the racist southern town. Monica Lynne’s comments as the pair walk out of the store come close to conveying DuBois’ “twoness” because she comments on the treatment that she and T’Challa received, not just from the Klan members but also from the police and everyday citizens.

McDuffie’s implementation varies because rather than completely imbuing the meaning with action, he has Michael Collins and Misty Knight speak about identity in a conversation, not amidst swinging fists. The first conversation about “cybernets” occurs in Misty Knight’s car, and after a chase where the car gets blown up, Michael’s recitation of DuBois takes place in Misty Knight’s apartment. Here, the words, not the action, take center stage, and as such, McDuffie places the emphasis on how Michael and Misty Knight navigate a world that considers them as Others.

After wrapping up Misty Knight’s arm, Michael sees a framed picture of her partner, Colleen Wing. Michael asks Misty Knight if trusts Colleeen, to which she responds, “I trust her more than I trust myself. She’s like a sister to me. It’s just that this cyborg stuff is . . . look, this is embarrassing, can we skip it?” Michael proceeds to inform her that before he became “this thing,” he was Black, and in college, he had a white friend; however, “there were places our friendship couldn’t go.” Rather than focusing on cyborgs or cybernets, the discussion moves towards race, away from allegory and into the realm of reality. 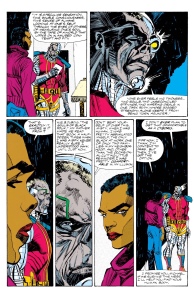 While Misty Knight and Michael are both cybernets, they begin to focus on their Black identity, which in turn, causes the reader to thing in the same manner. This movement draws a link between the cyborg allegory and the world outside of the pages that the reader inhabits, thus causing readers to think about the ways that their identity forms. In both instances, the consensus becomes that Michael and Misty Knight’s identities do not originate from themselves; they originate from the labels that others place upon them. Michael counters this when he tells Misty Knight to call him “Michael” instead of Deathlok.

Michael continues by stating that he does not necessarily know who his “own people” are anymore partly because, as he says, “I was pretty assimilated” before becoming Deathlok. Throughout “The Souls of Cyberfolk,” and the series as a whole. Michael struggles to find his identity and his true self. Others label him “monster,” “cybernet,” or “cyborg,” but he works to maintain his true self through his epistles to Tracy and through his interactions with Misty Knight and the computer he inhabits.

After McDuffie’s Deathlok, Christopher Priest’s Black Panther debuted in 1998. Within Priest’s run, he addresses the same questions about identity that McDuffie, McGregor, and DuBois did before. One of Priest’s main goals was to figure out how to get white readers to buy Black Panther and identify with T’Challa. To do this, he chose to have “The Emperor of Useless White Boys,” Everett K. Ross, narrate the story. Three years after the start of his run, Priest had Ross, a white character, experience the “twoness” that DuBois speaks of in The Souls of Black Folk when he takes on the appearance of Mephisto. Echoing McDuffie in some ways, Priest presents Ross’ transformation and questioning of his identity not through action but through everyday interactions with those around him.

Unlike McDuffie, Priest does not directly invoke DuBoisian Double Consciousness, and I would argue he eschews this direct reference in part because of the readers he tries to read with he book. If he wants to instruct, essentially, white readers, name dropping DuBois probably wouldn’t work. Instead, having Ross, in the appearance of the monstorous Mephisto, experience the “twoness” and invisibility that DuBois and Ellison write about cause them to identify with Ross. I cannot say whether or not this method is effective or if McDuffie’s is more effective. I can say, however, that each draws upon a Black intellectual tradition and uses comics expound upon that tradition and to pass on that knowledge to future generations.

What are your thoughts?  Let me know in the comments below or on Twitter: @silaslapham.

← Dwayne McDuffie’s “Deathlok” and Language
Looking at Court Cases in the Composition Classroom? →