Reconstruction and Whiteness in Frank Yerby’s “The Vixens”

In “How and Why I Write the Costume Novel” (1959), Frank Yerby discusses what he terms the “costume novel,” a novel that is essentially “light, pleasant fiction.” Rather than working to persuade his readers and protest social injustice, Yerby states that his job as a novelist “is to entertain. If he aspires to instruct, or to preach, he has chosen his profession unwisely.” While Yerby says this, his novels subvert expectations at certain points and do serve as vehicles of instruction. A case in point would be his second novel The Vixens (1947), a novel that does not appear in its original form. Initially, Yerby wrote Ignoble Victory, but Dial Press wanted Yerby to revise the novel adding “more sex!”

While Yerby claims that Ignoble Victory was perhaps his best written novel to that point, he states that The Vixens makes his stomach turn, and he “can get as far as the point where Denise appears with her violet eyes, miraculous figure, and untamed libido.” Amidst this lustful, sex fueled focus on Denise Lascals and Laird Fournois, Yerby weaves sub-plots that counter histories of Reconstruction that labeled Blacks as “ignorant and ductile” through the incorporation of Isaac and his brother Nim and the Black community of Lincoln. He incorporates references to historical figures and massacres such as the Mechanics Institute Massacre in New Orleans in 1866 and the Colfax Massacre of 1873.

Stephanie Brown notes that Ignoble Victory seeks to counter misrepresentations of Reconstruction-era Blacks, and she continues by stating that the manuscript “offers a fictive correlative to the revisionist historical work of [W.E.B.] Du Bois and various less well known black historians who had by this time written similarly ignored regional studies of nineteenth-century black political figures.” Yerby’s research for his novels was thorough, even including end notes in some of his texts like The Saracen Blade (1952). If he did not wish to instruct his readers, why go through so much work to research his novels and even provide notes for his audience? This is an argument for a longer piece, but it is something to consider. 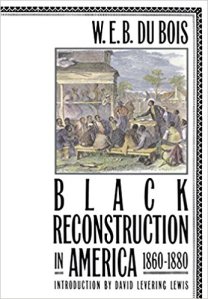 Today, I want to briefly touch on one way that Yerby relies on Du Bois in The Vixens. (I see him drawing on the same ideas in other novels as well.) Specifically, I am interested in Yerby’s characterization of poor whites in his works. This class populates his “costume novels,” and if we are to read works such as The Saracen Blade, a novel set in thirteenth century Italy, in relation to Yerby’s moment, as he tells us we should, then poor whites appear there as well, albeit in a feudal system.

DuBois, in Black Reconstruction, claimed the causes of the Civil War stemmed from, in part, “the South’s [determination] to make free white labor compete with black slaves, monopolize land and raw material in the hands of the political aristocracy, and extend the scope of its power.” Yerby was acutely aware that the majority of Southern whites were not wealthy landowners, and not all Southern whites owned slaves. In fact, Yerby directly references, in The Foxes of Harrow, that before the Civil War men read Hinton Helper and George Fitzhugh. Yerby summarizes Helper’s argument by stating, “Only two hundred and twenty-five thousand men actually held slaves . . ., while in the pine barrens and the clay hills and the swamp bottoms white men rotted in idleness.” These “white men” were poor whites, men who Keri Leigh Merritt point out did not own land or slaves and were under constant surveillance from wealthy landowners before the start of the Civil War. 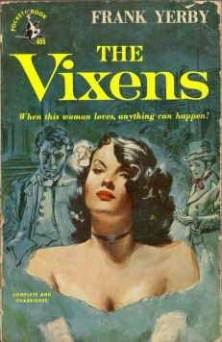 Before the war, wealthy landowners sought to keep poor whites and Blacks (both enslaved and free) away from one another for fear that they would join together and overthrow the plantocracy. The affluent maintained constant surveillance and scare tactics on poor whites throughout the two decades leading up to the war, and they would re-purpose these methods during Reconstruction and Jim Crow to maintain their power of Blacks. Yerby lays this out in the prologue to The Vixens; however, he does not, based on the prologue, cover it as much throughout the novel. It’s not until Benton’s Row (1954) that he focuses part of the narrative on poor whites. (I do not know if there was a focus on poor whites in Ignoble Victory.)

After the war, some wealthy landowners lost their money and property, and the South’s ruin, as Merritt points out, provided poor whites with the opportunity for land ownership and social mobility. Oren Boscomb in Benton’s Row is one such example of this. In the prologue to The Vixens, Yerby lays out what occurred in the immediate aftermath of the war when men on both sides were tired and just wanted to return home, northerners to their untouched homes and southerners to their ruined landscape. While those Southerners who fought, mostly non-landowners, wanted to get back to their lives, “the men of dishonor took over.”

Hidden from view, the men sat “in their smoky offices in the great bleak cities” and moved people like chess pieces to make sure that things remained as they had been since the beginning of time: “Master and man, black men owned, white men out in the piney barrens, debased and starving.” The secretive, “honorable” men told themselves lies “to believe that they were the soul of chivalry, or the spirit of progress”; however, their deeds and actions make them nothing more than cowards hiding behind the cloaks of others. Yerby continues by stating that these men did not enter the fray themselves; rather, “[t]hey moved the pawns and stood aside, sneering at the things they used, contemptuous of the nasty methods of the men with leprous minds who did he actual fighting.” Even if they disagreed with the methods they had unleashed, the men rejoiced at the outcomes that kept them in power.

With the poor white in their corner, the men then moved to the “black man” who was rising with individuals who resembled “Moses and Joshua,” building dreams that the men in smoky rooms could never allow. Laying their hands “caressingly upon the shoulders of the poor white, he whose dream was the same as the black man’s dream,” the affluent men played upon the poor white’s belief in “the mystical brotherhood of whiteness,” in effect causing him to not understand democracy. If the Black man rose, the men in the smoky rooms would claim, the poor white would “be mudsill—[he would] be earthdung and nothing.”

This is how The Vixens begins, with three pages that lay out the history of Reconstruction–the rise of newly freed Blacks, the flattening of whiteness, and the terror that arose. Right now, I am just delving into Yerby’s representations of poor whites in his works, so this is part of an ongoing project. What are your thoughts? Let me know in the comments below. Make sure to follow me on Twitter @silaslapham.

← “What do you produce as an English teacher?”
Multicultural Cities in Frank Yerby →