Last post, I examined a couple of issues that I kept thinking about while reading Bitch Planet‘s “The Secret Origin of Penny Rolle.” Today, I want to expand upon some of those ideas and look at the ways that the comic addresses the increased nature of surveillance in our world. This occurs throughout almost every issue of Bitch Planet; however, I just want to focus on a couple of important moments: one from “The Secret Origin of Penny Rolle” and one from issue #7, “President Bitch: Part One.” Each of these moments portrays different aspects of living within a surveillance state, and each calls upon us to ask what we give up by living in such a position.

During a flashback that shows Penny working in her muffin shop, the issue of constant observation and policing arises. The action that occurs in Penny’s shop highlights how surveillance works as a disciplinary power to keep individuals in line, thus not challenging those in power. This aspect shows up with the white male customer who demands that Penny get a move on and have the muffins ready. He comments on Penny’s appearance and confronts another woman who he feels is being disrespectful to him. In each instance, Penny works to calm the situation and suppress the feelings that rise up within her over being discriminated against.

While waiting in line, a woman expresses her frustration over people displaying their private screens for everyone to see. She exclaims, “God forbid folks use their private screens and leave the rest of us in peace.” The man raises a finger and replies condescendingly, “Private screens don’t build community.”  The screen, projected on the wall of the shop, reinforces the patriarchal society of the series through its news like programming that promotes slim physiques via a parasite that women can ingest to lose weight.

After the man responds to the woman’s comment, the next panel shows him addressing her in an antagonistic manner because he feels that she rolled her eyes at him. He asks, with an angry scowl, “Did you just roll your eyes at me?” The woman, who averts her gaze, replies with a simple no. Between this panel and the next, we can assume that the man makes some sort of gesture because we see Penny offering him a free muffin. At this moment, both women self-police themselves and look out for one another. They, in essence, become part of the self-disciplinary system through their own actions and responses. This is similar to things I have written about before with texts such as Solomon Northup’s Twelve Years a Slave. 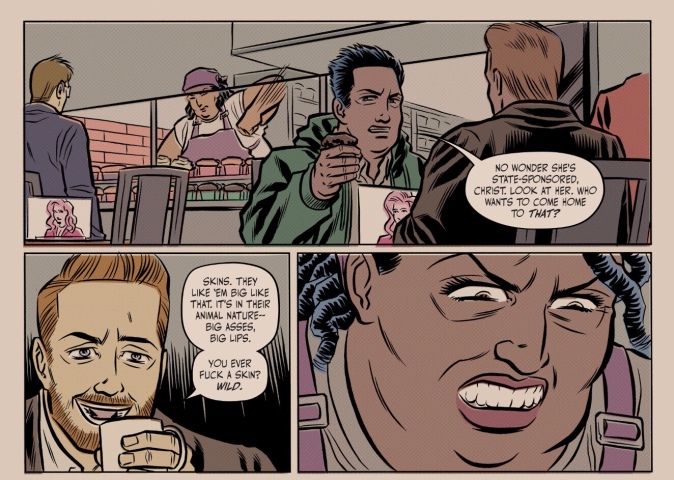 After the exchange, we see a panel with Penny in the background releasing her anger by pounding the dough with her fist as the man sits at a table with another man and says, “No wonder she’s state-sponsored. Christ, look at her. Who wants to come home to that?” The other man replies, “Skins, they like ’em big like that. It’s in their animal nature–big asses, big lips. You ever fuck a skin? Wild.” These comments, of course, play on stereotypical images of Blacks, and that is another discussion for another day. What I want to point out here is the fact that the first man’s appearance is similar to Penny’s yet no one accosts him for looking the way he does. This is important in highlighting the double standards within the series, and I would add, within our own society.

The other instance of surveillance occurs on the first page of issue #7, and it highlights the ways that policing disproportionately targets Blacks, especially Black children in this case. As well, it points to the ways that corporations subsume individual human rights in order to protect their own self-interest. The page contains twelve panels, three rows of four panels each. The panels oscillate from three kids using a short cut to get somewhere and a security guard in front of a wall of screens.

Hoping to save an hour on their trip, the three youngsters jump the fence and head through the private area. One says, “If they ask us to leave, we’ll leave.” The security guard, though, does not ask. The computer warns him of the “intruders,” and he asks what legal options he can pursue to address the issue. After analyzing the children, the computer states, “Corporate personhood act permits bearing of arms, protection of property and self-defense.” Similar to stand your ground laws, the act allows the entity, the corporation in this case, to protect its property through armed enforcement. The security guard can deny action, but he stereotypes the youth and simply responds, “Yeah. . . they look sketchy to me.” The guard’s flippant, nonchalant statement, causes the security system to murder the kids. When the system asks, “Would you like to make the report?”, the guard dismisses the question with a wave of the hand and says, “Nah, you do it. I’m going to lunch.”

Kelly Sue Deconnick and Valentine de Landro comment on this page at the end of volume two. Deconnick notes that the page forced her “to consider how the horror of Trayvon Martin and Tamir Rice could become even more casual in a situation where a corporation was afforded the protections of something like ‘stand your ground.'” Those protections lead to the callousness of the act. Instead of picturing the children as flesh and blood, the security guard and the security system treat the situation as an everyday occurrence. It does not matter that they just murdered innocent kids. The system of surveillance partly creates this disconnect. The guard does not physically pull the trigger; rather, he merely watchs it on a screen like a movie. 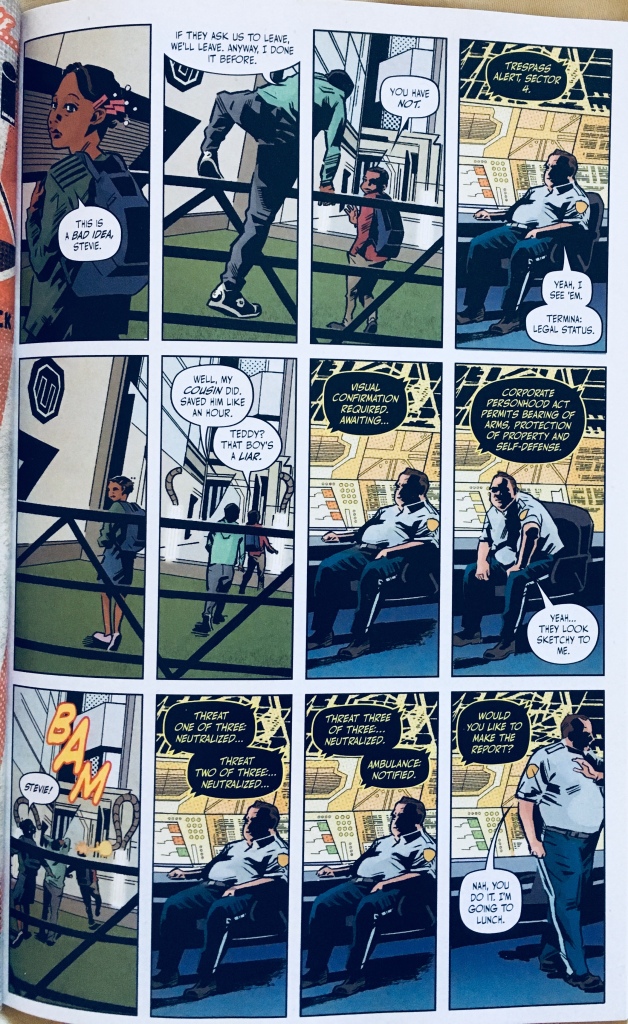 This act, as well, highlights the ways that Black youth, within the eyes of those in power, become criminalized and ultimately dehumanized. The guard bases his actions on the fact that they “look sketchy.” What does that even mean? It means that the children do not fit within his construction of what children look like. This is the same issues that occurs with Penny Rolle that I discuss last post and earlier here. By denying the children humanity, the guard has no problem telling the detached security system to murder them simply for wanting to use a short cut on their way somewhere.

There are a lot of aspects of Bitch Planet that need to be examined in more detail, as the round table at The Middle Spaces has shown. For now, though, what are your thoughts? As usual, let me know in the comments below, and make sure to follow me on Twitter at @silaslapham.

← “Why folks gotta say what I am?” Identity in ‘Bitch Planet’
Literacy in Kyle Baker’s “Nat Turner” →