Reflections on EJI Legacy Museum and Memorial for Peace and Justice

Every semester, I try something new in my classroom. Recently, I’ve been working on decentering my courses in various ways, specifically through the use of active learning assignments. These involve assignments such as my archives project  or creating more student centered discussion through the questions I pose in class. This summer, I taught a minimester course in early American literature. Essentially, we met 24 straight days for a month. Because of the protracted time I had with students, I decided against using the archives project (I did have them visit the archives). In its place, I chose to take students to the Equal Justice Initiative’s (EJI) Legacy Museum and National Memorial for Peace and Justice in Montgomery, Alabama, and write a reflective response or create a multimedia response to the trip. We spent the day after our trip to discuss what we saw. Students, as well, created a Google Doc to share their experiences in order to help with the paper or project. For this assignment, I took cues partly from Margaret Mulrooney’s recent post about her use of digital commonplace books in her course. 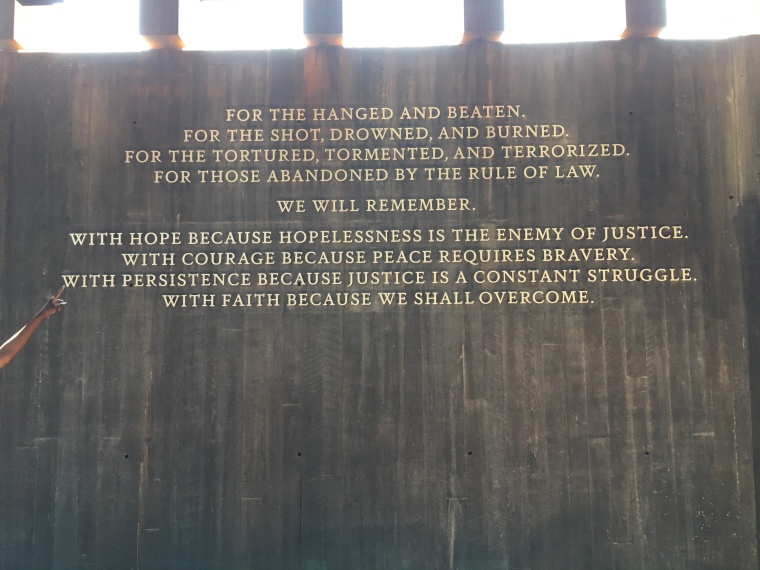 The EJI museum and memorial opened In April 2018 and they tell the stories of over 4,000 Black men and women who were lynched between 1877 and 1950. Bryan Stevenson, director of EJI, explains the importance of these sites when he states, “Our nation’s history of racial injustice casts a shadow across the American landscape. This shadow cannot be lifted until we shine the light of truth on the destructive violence that shaped our nation, traumatized people of color, and compromised our commitment to the rule of law and to equal justice.”

Even though my class focused on American literature to 1865, I wanted students to see the continued “shadow” that lingers over America today. In this way, I hoped to show them that what they read from the early nation still resonates today and we need to heed the words of authors such as Frederick Douglass, William Apess, and Harriet Jacobs as we encounter the tendrils from the past that wrap themselves around our very being. We need to lift the shadow and burn the tendrils away. The EJI museum and memorial, along with sites like the Whitney Plantation, are important steps in this process.

Today, I want to briefly share some of my students’ reflections on their trip to the EJI museum/memorial. As I read through students’ reflections, I became overwhelmed by how much the trip affected them and caused them to think about the things we were discussing in class. While at the EJI museum and memorial, I spoke with them, but mainly I tried to stay back and let them take everything in. As a teacher, this was hard to do at times, but I forced myself to be there as a facilitator if they had questions, not as  teacher with all of the knowledge. Upon seeing the “A Man Was Lynched Today” flag that flew outside of the national NAACP’s office, students asked, “What is a lynching?” This question highlights the importance of the EJI museum and memorial.

With all of that in mind, I am just going to share some of the student projects and comments from their trip to Montgomery. I have not altered the student projects, so there are some items here and there that may need work. However, I am sharing them (with permission) because I think they highlight the ways that sites like the EJI museum and memorial spark conversation and a reckoning with the “shadow” that remains overhead.

When we went to the memorial, every student found the monument for their home county or parish. Some monuments had one name of an individual who died at the hands of white supremacists. Other had two columns. What these students saw and thought can be summer up by one student’s statement on her Instagram story: “Who knows how many more there were. Who knows, when I walk around my county, who could have been killed there, what stories the soil beneath me holds.” The students saw a video like the one below, and it caused them to ask, “What happened on the ground upon which I walk? How does that history affect us today?” This was an important question I always want students to consider. That is why I have them work with archives. That is why I have them visit sites like the EJI museum and memorial.

The EJI Legacy Museum sits on the ground of a former warehouse that housed enslaved individuals. When you enter, you read on the brick wall, “You are standing on a site where enslaved people were warehoused.” Upon enter the museum, one student commented that the words did not have an emotional effect on here. She wrote in her Instagram story, “Despite noticing and reading the words painted on the wall, I have to admit that wall did not exactly provoke any profound thinking, but rather just a surface level thought of the irony that the Equal Justice Initiative decided to put a museum in that area of Montgomery over other places. Little did I know, those eleven words painted on the brick wall would have a lasting impact on how I view the world.”

After walking through the museum, she returned to the same words, and her feelings changed. She wrote,

Upon walking up the exit ramp and around the corner, I looked straight ahead. Above all of the people in front of me, I saw those eleven words painted on the brick wall in the entryway: “You are standing on a site where enslaved people were warehoused” This statement that I really did not think anything of upon entering the museum now changed my entire view of the museum and the even larger, the world. I had started reflecting on everything I had just seen in the museum and subconsciously began to smile. This may come across as a strange reaction to have to all of the horrible things I had just learned about, but I began to smile because this community of people who have been terrorized and oppressed for centuries took a place that is historically painful in their culture, and turned it into one of the most thought provoking, profoundly beautiful pieces of art I have ever seen. In a way, I smiled to say thank you. Thank you for educating all of the Legacy Museum visitors and telling your side of the story that is almost always left out of the history books.

The student saw, from those words, the importance of remembrance and reclamation. We can continuously say, in our classrooms, that students need to interrogate what they read and learn from us, other teachers, media, and books. However, coming face to face with eleven words on a brick wall can make a greater impact than anything I could ever say in the classroom.

Another student created a website that provides some good images and information on Jim Crow laws and other items. Warning, there are a couple of disturbing images on the website.

In all of the projects and reflections, I could see students working through what they experienced and what we had been discussing in class to that point. I want to leave you with the reflections from two students that really stuck out. On his way back from the trip, one student passed a church and reflected on what the sign out front read. He wrote,

I saw a message on a sign in front of Gospel Tabernacle Church of God in Christ as I was leaving Montgomery on the day we visited, and it read “Change nothing and nothing changes.” As I was reflecting on our trip, this quote kept coming back to me and really reinforced one of my biggest takeaways from the museum and memorial. Nothing has fundamentally changed, it has only evolved. Slavery is now jail time. Segregation is now disproportionate admission to college campuses. We’ve fooled ourselves in thinking we have come so far, but I feel like it is worth writing again, “Change nothing and nothing changes.” There must be an elementary shift in how we as a society view each other, love each other, care for each other, and watch out for each other. Until the time comes that we see beyond race, nothing will change.

Another student concluded his essay by writing,

Throughout the course of American history, racial prejudice and terrorism has been a consistent reality often over-looked in favor of a more pleasant American past. Museums and memorials help us to reflect critically on the events of the past and to understand the causes behind the problems faced today. The Legacy Museum and National Memorial for Peace and Justice give insight into racial prejudice as a tool for establishing white power dominance over people of color throughout the course of American history. This leads to questions as to what characteristics define America but also to solutions to the issues of racial prejudice today as understanding and identifying a problem is the first step in resolving it.