The Avengers and Interracial Intimacy: Part 1

I started reading a few issues of Avengers recently, specifically some written by Steve Englehart. Amid all of the superhero action and fighting, there is a commentary on interracial intimacy within the relationship between Wanda Maximoff (Scarlet Witch) and Vision (an android). Their relationship begins around Avengers 108 (Feb. 1973) as Wanda is in search of her brother Pietro (Quicksilver) and fears for his life. Over the next six issues, their relationship plays a role in the ongoing stories, and it serves, in many ways, as a commentary on the views towards interracial intimacy at the time.

Wanda and the Vision’s relationship appears only five years after the Loving v. Virginia decision in 1968 and Nichelle Nichols and William Shatner’s onscreen kiss in Stark Trek, four years after Raquel Welch and Jim Brown’s sex scene in 100 Rifles, and around the same time as discussions of interracial intimacy appeared on the small screen on shows like All in the Family (1971) and The Jeffersons (1975).  Archie Bunker and George Jefferson expressed the fears surrounding interracial relationships that remained even after the Supreme Court struck down anti-miscegenation laws, and it is within this cultural milieu that Wanda and the Vision’s relationship begins.

At the end of issue 108, Hawkeye complains about having a “hard day,” and Wanda responds by asking him if it has been harder than trying to figure out if her brother is still alive or not. As she turns and walks away, Vision looks at her and approaches. He tells her that the recent adventure has taught him about brothers and feelings. He consoles her and says, “I can offer no promises about your brother, but I can offer my shoulder, if you wish it.” Vision shows support for a grieving Wanda, and in that support, a relationship is formed. The final panel shows the two embracing with Thor, Captain America, and Iron Man in the foreground letting Wanda and Vision have their moment. This image foreshadows the Avengers’ acceptance of the couple and their role in protecting the couple from those who seek to tear the them apart. 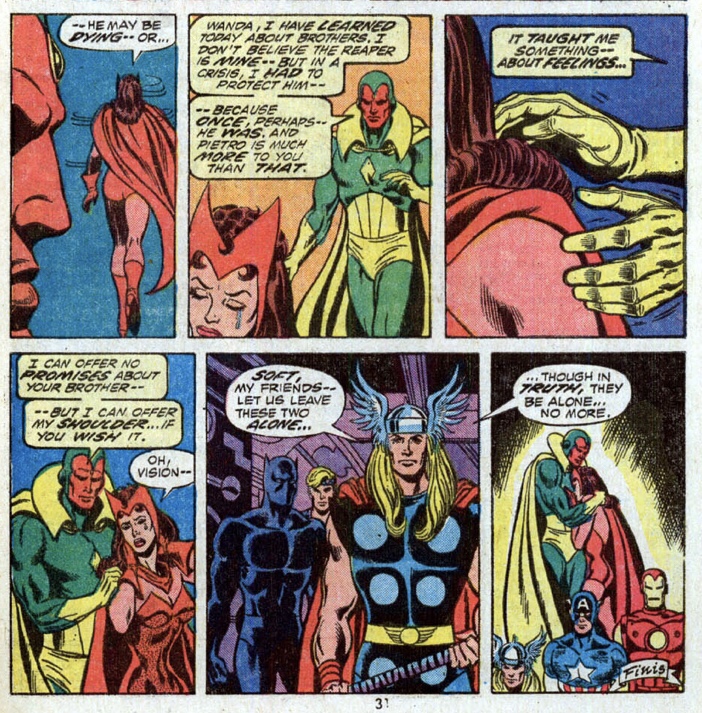 In issue 109, Wanda and Vision’s relationship becomes readily apparent to the reader. Wanda tells Iron Man how Vision is “the kindest, gentlest man in the entire blinking world!” By offering a shoulder for Wanda to, as she says, “lean on,” he comforts her and begins to forge a romantic bond. After Vision talks about learning to feel, Iron Man makes his exit, and as he does, he thinks to himself, “And I’ll say a little prayer, too, because society isn’t going to go for this once the news gets out, and although young love can move mountains, I hope you know what you’re letting yourselves in for.” Iron Man does not condemn the relationship, but he does understand the obstacles facing the couple, obstacles from a prejudiced society that sees the relationship as a contagion and detrimental to progress.

One of the first indications of opposition comes in issue 110 when Wanda gets a call from her brother Pietro. Pietro is excited to tell his sister that he has fallen in love with Crystal, a member of the Inhumans. After he tells Wanda about how Crystal saved him, he informs his sister, “Crystal and I are in love. and we plan to be married!” Wanda is ecstatic and replies, “And I have equally good news for you! The Vision and I have declared our love for each other so. . . ” Pietro cuts Wanda off mid sentence and screams, “What?!! After my repeated warnings against such a travesty? Haven’t you any sense at all? Don’t you realize. . . ” Wanda asks how Pietro can respond in such a manner and whether or not he even cares about her happiness.

The next panel shows Iron Man, Thor, and Black Panther as witness to the scene as Pietro’s words scroll over their heads. Pietro proclaims, “What has happiness got to do with this situation? There is a right and there is a wrong! No sister of min may become involved with a. . . a. . . a robot!” This panel is important for a couple of reasons. For one, it shows Pietro’s harsh vitriol against Wanda and the Vision’s relationship, a corollary to interracial relationships. Pietro would not have a problem if Wanda had a relationship with someone like Crystal, another human with superpowers, but since Vision is a synthetic android, he sees the pairing as an abomination. The second point is the framing of the panel. Rather than seeing the participants of the conversation, we see those who overhear it and their reactions. What will they do? How will they respond? It’s as if the panels asks the reader, “How would you respond here? What would you do?” 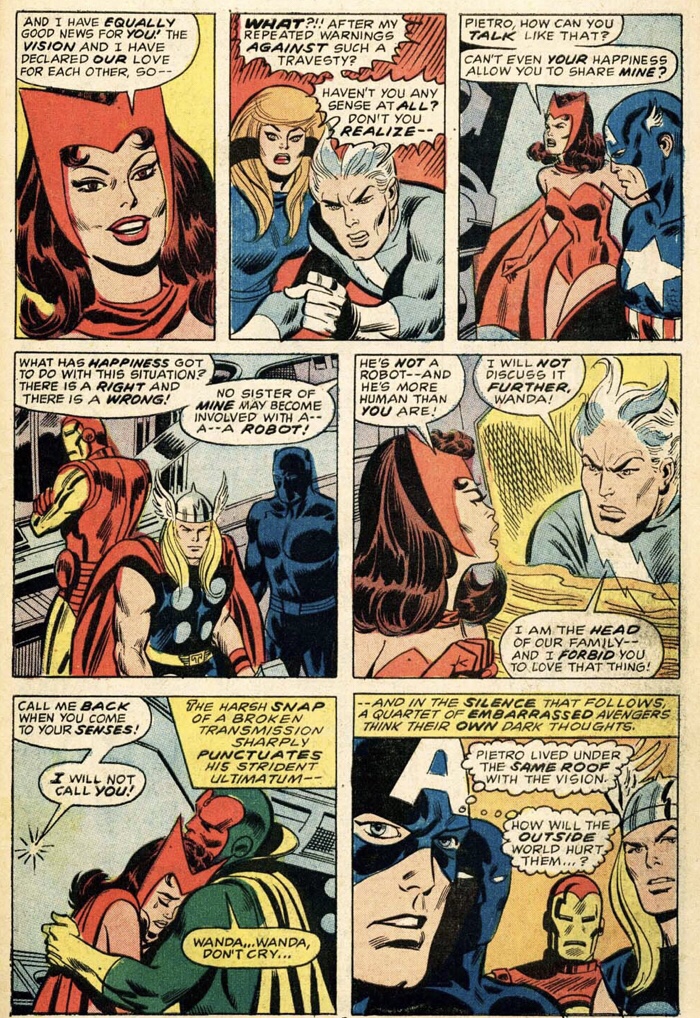 Pietro abruptly ends the call, forbidding his sister from even loving “that thing.” Vision embraces Wanda, again comforting her, and the final panel shows the rest of the Avengers and Captain America as he thinks, “Pietro lived under the same roof with the Vision. How will the outside world hurt them?” After seeing Pietro’s outburst, Captain America, like Iron Man, realizes the ways that the outside world will view Wanda and the Vision’s relationship, and by thinking this, he also implicitly asks, “What will I do when they face the hate of the outside world?”

The Avengers do not have the luxury to sit around and work through the conversation between Wanda and Pietro because they must head to Xavier’s School for Gifted Youngsters to help free the X-Men from Magneto’s clutches. However, on the way to Xavier’s School, we see the team having conversations with themselves about the episode that just transpired. Wanda and Captain America ride together, and he tells her that she has done nothing wrong and that the choice to love her lies with Pietro, not herself. He finishes by stating, “You don’t have to play by his rules.” This line, of course, echoes the “rules” that deny Tee Bob and Mary Agnes a relationship in Gaines’ The Autobiography of Miss Jane Pittman.

The next panel shows Thor as he flies through the air. He thinks about his love for “a woman of another culture: the mortal Jane Foster.” That relationship caused problems, yet, as Thor reminiscences, the relationship “did persevere” for a time until, it appears, the outside pressures causes their relationship to fall apart. He concludes by thinking, “A most unpleasant parallel to ponder.” When we see Iron Man, he thinks about all of the women he has loved, and in the process he thinks, “I’ve never seen love like Wanda and the Visions.” Thor and Iron Man, as they do earlier, note the obstacles in the way of the relationship between Wanda and Vision, yet they also know that the couple love one another. They do not stand in the way, and they ultimately stand in the gap. 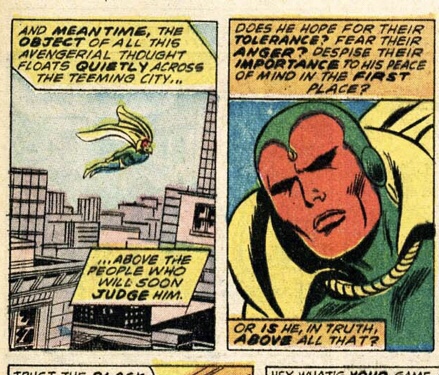 The last two panels of this sequence show Vision as he flies above the city. We do not get his thoughts, but we do get a narration that asks us to think about his feelings: “And meantime, the object of all this Avengerial thought floats quietly across the teeming city, above the people who will soon judge him. Does he hope for their tolerance? Fear their anger? Despise their importance to his peace of mind in the first place? Or is he, in truth, above all that?” Rather than having Vision ask these questions, Englehart confronts the reader head on, making him or her think about the ways that prejudice affects the mind of an individual.

Notably absent from these reflections is Black Panther. He leaves for Xavier’s School in his own craft, alone with his own thoughts. What does it say that in a story arc about interracial intimacy we don’t see the thoughts of the one Black character in the book? Is that to placate white readers? I’m not really sure, and it’s something I need to think about more. 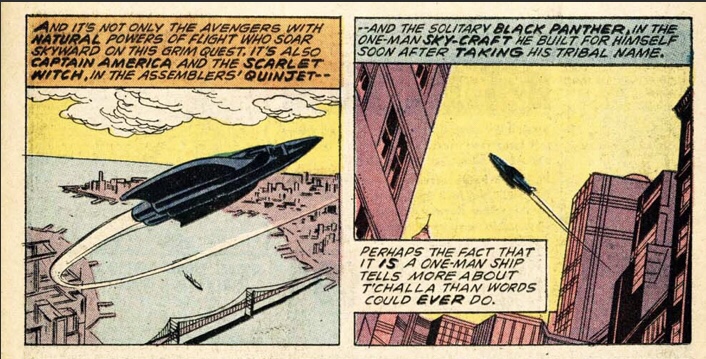 Stay tuned next post where I finish up discussing the beginnings of Wanda and the Vision’s relationship. Until then, what are your thoughts? As usual, let me know in the comments below. Make sure to follow me on Twitter @silaslapham.