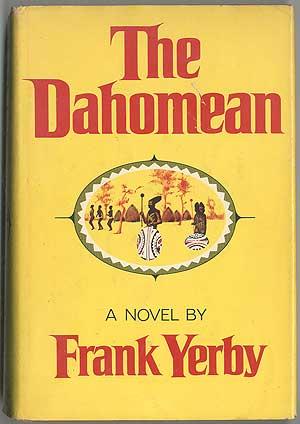 Frank Yerby’s The Dahomean (1971) stands, to many, as the author’s best novel. (It also goes by The Man from Dahomey. My edition has this title.)  Still set in the past, like most of Yerby’s other works, The Dahomean differs from his previous novels because it focuses on black characters, specifically African characters. Speak Now (1968) does center on an African American expatriate in France. With The Dahomean, Yerby relied on the research found in Melville J. Herskovits’ Dahomey: An Ancient West African Kingdom (1967) to write the novel. Ultimately, Yerby sought “to correct, as far as possible, the Anglo-Saxon reader’s historical perspective” and to prove that “[m]yths solve nothing, arrange nothing” (5, 6). Yerby does this relating the story of Hwesu‘s life in Africa before he gets sold into slavery at the very end of the novel.

The Dahomean contains many aspects (class, slavery, reality versus belief, reversal of beauty, etc.) that warrant further exploration, especially in regards to Yerby’s representation of Dahomean culture. Today, though, I want to write briefly about the symbolism of the horses in the novel, specifically the N’yoh (It is good). Horses, typically, “we’re miserable racks of bones” in Dahomey, and if they were strong, they would die quickly due to the flies and diseases. When Hwesu’s father Gbneu brings a strong Auyo stallion home, he laments that the horse will die writhin a few months (246). Hwesu proposes that they mate the Auyo stallion with one of the bony mares in the stable. This way, there would be “hope [that] the colt, having half the blood of a dam accustomed to the tsete flies, will live–” (247).  The stallion died before the colt, N’yoh, arrived, but the new colt “proved to be even more beautiful than his sire” (247).

Hwesu eventually loses N’yoh to the king of Dahomey, something he expects to happen seeing that N’yoh is the finest horse in the kingdom. However, Hwesu does not view this loss negatively because he learns that “no less than three of the mares had foaled since his departure from Alladah,” and the colts survived and grew strong (317). These colts, along with N’yoh, show the strength of intermingling. Throughout The Dahomean, European culture intersects with Dahomean culture in various ways, most notably through trade. Likewise, the struggles of class, government, and religion that pepper the novel have correlations to European culture. By having N’yoh, and other colts, sired through a joining together of Dahomean and Auyo horses, Yerby, underneath a narrative surface that does not provide European characters, something for us to thing about.

The intermingling of cultures, and the benefits of their contact, comes into full view in the follow up to The Dahomean, A Darkness of Ingraham’s Crest (1979). In that novel, there are two interracial relationships that seek to escape the Southern mores and customs that keep them from marrying one another. While the couples consist of light skinned sibling slaves (Joe and Ellen Collins), the desire of the whites, Abigal Collins and Dwight Ingraham, to marry them, nonetheless, presents a joining together of cultures that will strengthen society. This mirrors Charles Chesnutt’s “The Future American” in some ways. Along with the interracial relationships, A Darkness of Ingrahams’s Crest shows the contact between a white southern planter class and Hwesu (now Wesley Parks).

At various points in the novel, Wes’s display of his African culture, specifically in his dress and actions, leads the whites to see the humanity in their property. This becomes especially evident during Wes’s arranged marriage to Phoebe, another slave. For the wedding, Wes sewed traditional Dahoeman clothes and made traditional Dahomean jewelry for Phoebe to wear during the ceremony. When the whites gathered at the Christmas Day wedding see Phoebe, they start to question their own perceptions of those they keep enslaved. They think,

[F]or if a nigger wench could be this lovely, move with this grace, display this kind of noble, deep, refined and tender feeling, the emotional foundations upon which they’d built their world, the bedrock convictions that enabled the absolute contradiction of their maintenance of slavery to coexist with a proud and stubborn self-respect, would begin to slip and slide along subterranean geological faults deep in their flinty psyches, to bring that world crashing to utter ruin. (274).

Being an African sold into slavery, Wes introduces both the slaves and their owners to his culture. Along with this, he takes on aspects of the American culture by learning to read , learning about the environments and studying law. He joins his past with his current surrounding to make him stronger. This mixture causes him to point out the absurdity of the slave system to those who seek to uphold it.

There is more that could be said about these topics, and that would take an article length post. Suffice it to say, I have more to write about both of these novels, so make sure to stay tuned to the next couple of posts for more on Yerby’s work.

Yerby, Frank. A Darkness at Ingraham’s Crest: A Tale of the Slaveholding South. London: Granada, 1981.

–. The Man from Dahomey: An Historical Novel. London: Mayflower Books, 1973.