Frank Yerby and the Myth of White Southern Womanhood

As mentioned in my recent post on Gillian (1960), Frank Yerby challenges the myth of Southern womanhood in his works. While I did not discuss how he does that in Gillian, I want to explore how he shatters the myth in A Darkness at Ingraham’s Crest (1979), the follow up to his 1971 book The Dahomean. While The Dahomean chronicles Hwesu’s life in Africa, concluding with his enslavement and shipment to America, A Darkness at Ingraham’s Crest  follows Wes Parks’s (Hwesu name given to him by his master) captivity in Mississippi. Unlike The Dahomean, the novel focuses on other characters, black and white, in the community that rests just outside of Natchez. It is through these white, female characters that Yerby deconstructs the myth of Southern womanhood, a myth that arose out of the late eighteenth and nineteenth century Cult of True Womanhood, or The Cult of Domesticity.

Originating in Puritan New England, the Cult of True Womanhood became evident in the South during the nineteenth century, and beyond, and existed as a way to maintain race and class distinctions because black women were not allowed to be conceived as women because they did not adhere to the four pillars of “true” womanhood: piety, purity, submission, and domesticity. Tolbert Weatherbee questions if Ashton Bibbs actually “believe[s] all that undiluted crap about Southern womanhood” before he defines it at length:

Our women, according to popular legend, are Ladies. And Ladies have ice water and pink lemonade in their veins. Ladies have not the faintest vestiges of carnal desire. They submit to their husbands out of a sense of duty-lying there perfectly still and waiting for said husbands-disgusting male animals, slaves to their baser instincts!-to get the whole incomprehensible and repugnant business over with as quickly as possible, because of that aforementioned sense of duty and because they maintain sufficient maternal instincts to want to have babies. (75-76)

Tolbert focuses his attack on the purity of Southern womanhood by arguing that the pedestal fro Southern white women gets higher and higher because of miscegenation. He tells Ashton that the “roistering down in the quarters” doesn’t benefit anyone, even though the community insists on “piously labeling it a safety valve that protects the Vestal Virgins we’re courtin’ or married to, from our baser natures” (77).

Yerby further attacks this myth by having Pamela Ingraham, a New England woman who despises slavery at the beginning of the novel and marries into the planter class, as one of the central characters in the novel. (Pamela, eventually, becomes accustomed to the life of a plantation owner and becomes a cruel mistress to her slaves.) Pamela goes against three of the four pillars of the Cult of True Womanhood (piety does not really come into the novel) in her actions. Specifically, Yerby attacks the idea of the white woman’s purity. While Pamela is an emigrate to the South, she becomes entrenched in the mores and customs of the region.

During her tryst with Tolbert, Pamela, while trying to get him to sleep with her, tells the lawyer, “I want to go bed with you. To lie war and naked and ravished in your arms. . . . Unladylike. But I am not a Lady. I am me. A-female of the canine species-who-hates all the appallingly-dreadful things she is” (348). Pamela, like Gillian and Hero in Gillian, goes against the belief of white women of standing as “Vestal Virgins” devoid of sexual desire and unpure. Pamela’s desires, in fact, lead to the accidental death of her daughter Deirdre. As Tolbert and Pamela have sex, they hear a crash in the girl’s room. Mid-coitus, Tolbert asks Pamela what the sound was, and she ignores him, twice, pushes him down on the bed and continues the act. Her actions, in the face of Tolbert asking her about the sound from Deirdre’s room, highlights the extent that Pamela does not uphold the myth of a purity. 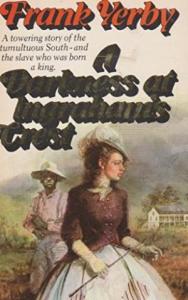 Along with Pamela, Yerby presents other white, Southern women as demythologizing forces. Specifically, the seventeen- year-old Ruth Collins counters the myth in her affair with the married Ashton Bibbs. After he takes her virginity in consensual sex, Ruth tells Ashton, “I want you to-to make love to me-again, And again and again and again and again! I don’t want you to ever stop!” (303) Ashton and Ruth continue making love, Wallace Bibbs, Ash’s father, arrives at the cabin after being shot in the stomach. Wallace dismounts his horse in the rain and collapses before he can reach the door. Inside, Ahston and Ruth di not hear him, finding him face down in the mud the next day. Wallace survives for a while but eventually dies the same night as Deirdre. Like Pamela, Ashton and Ruth do not recognize what happens because they are engaged in activities unbecoming of a “true” Southern woman.

These are only two examples of how Yerby demystifies the myth of Southern womanhood. His discussion of miscegenation needs to be explored within this context, and the way he counters the representation of white women with black and mixed-race women also needs to be examined. (This latter topic will be the focus of the next post.) As usual, what are your thoughts? Let me know in the comments below.

← Intersecting Cultures in Frank Yerby’s “The Dahomean” and “A Darkness at Ingraham’s Crest”
Frank Yerby and the Myth of White Southern Womanhood, Part 2 →