Over the past few weeks, I have seen numerous responses to Colin Kaepernick’s demonstrations during the National Anthem. Last week, an article even appeared on ESPN pointing out which players chose to demonstrate during the anthem in week three of the NFL season by kneeling, raising their fists in protest, or through some other means. Editorials and opinion pieces have appeared in various media outlets about Kaepernick and others who have chosen to protest along with him. For me, Kaepernick’s decision, and the decision of others, to protest the anthem is important because it draws attention to the discrepancies between ways individuals get treated in this country. It is sad that we need such reminders of racism and subjugation in the country almost fifty years after the Civil Rights Movement, but we do.

Well-meaning people, as I wrote about James Baldwin in the last post, will not change or affect change until they wake up to the oppression of others around them. Even if they do wake up, some may not even work to change the system and will only continue to benefit from it, albeit with the knowledge that they are in a advantageous position to do so. Others during the 1960s wrote about this same issue and about whether or not the United States actually accepted them for who they were or rejected them for the color of their skin. Unfortunately, the latter point proved the truth.

Ernest J. Gaines, as I have written about numerous times before, challenged what it meant to be African American and American at the same time. James Meredith’s integration of Ole Miss in 1962 led him back to Louisiana to write about segregation and racism in his home state, and even though he did not produce volumes of essays on the subject like James Baldwin and others did, Gaines’s writing causes us, as humans, to face our prejudices and realize that oppression exists and we need to confront that oppression.

In Gaines’s “The Sky is Gray,” which originally appeared in Negro Digest in 1963, the student who waits next to James and Octavia in the waiting room at the dentist’s office speaks about the supposed liberty and freedom that the flag and the United States represents for African Americans. After a woman claims that the grass is “green because the people say it’s green,” the student counters her assumption by telling her “the people” are the same ones who say that him and her are “citizens of these United States” (101). She believes she is a citizen; however, the student replies, “Citizens have certain rights. . . Name me one right that you have. One right, granted by the Constitution that you can exercise in Bayonne” (101). The woman sits there for a second, dumbfounded, before claiming that things are in the process of changing. The changes, according to the student, are occurring because “black men have begun to think with their brains and not with their hearts,” which eventually leads to action (102). 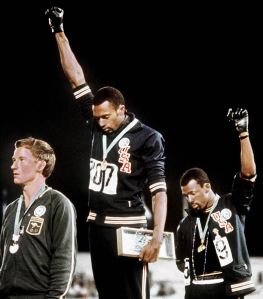 When people begin to act, things begin to change. This happened during the Civil War, during the Civil Rights Movement and following, and it is happening now. Kaepernick’s actions have started a movement in the arena of sports, an arena that has sparked other such moments as well: Tommie Smith and John Carlos in the 1968 Olympics, Jackie Robinson in 1947, Jim Brown and Muhammad Ali, and countless others. However, while some have tried to shift the focus of Kaepernick’s protest, detracting from his actions and his message, others have taken up and joined with him to voice their desire to see a stop to the senseless killing and systematic subjugation of African Americans and others in this country.

We can hide behind patriotism and national pride, but those things do not change the fact that this country has a long history of condoning slavery and oppression of those who do not adhere to a “white” or “civilized” identity. Look at our history if you don’t believe me on this fact. What can we do to change this? Gaines wrote “The Sky is Gray” in 1963. David Walker wrote his Appeal in 1829. Have things changed? Yes, but they still remain the same. Things exist in a different guise, under different names: patriotism, respectability, hard work, etc.

The young student in Gaines’ story hopes that all of the men are not like him, rejecting the heart for the mind completely. He hopes that the coming generation will believe in God, even though he does not: “Unfortunately, I was born too late to believe in your God. Let’s hope the ones who come after will have your faith-if not in your God, then in something else, something definitely they can lean on” (102). Is there something else today? Have we moved on? Or, is our current generation still failing to find something to lean on that will propel us forward rather than sucking us back down into the mire of the past that perpetuates the belief that if you do not reverently observe a symbol that represents an entity that does not consider you a citizen you are somehow disrespectful and in the wrong?

As a final note, I want to acknowledge the actions of students at UNC who protested during last week’s National Anthem before their football game with the Pitt Panthers.

What are your thoughts? As usual ,let me know in the comments below.

One Comment on “Colin Kaepernick, the National Anthem, and Progress?”