The Media and Teaching Students how to Evaluate Sources Post-Election

A couple of days ago, a friend posted an article entitled “Bernie Sanders Could Replace President Trump with Little-Known Loophole.” Matt Masur, with the title and in the opening paragraph, positions The Huffington Post as factual and something that could happen. However, immediately following the first paragraph, he informs his audience that Sanders cannot replace Trump and that too many people have been getting false information on their social media feeds and elsewhere during the previous election and even before then. In the rest of the article, Masur discusses the proliferation of false information and gives a crash course for readers in sifting through the misinformation by using critical thinking skills. As you might suspect, the first reply to my friend’s post essentially called her our saying that Sanders could not replace Trump, thus proving Masur’s point.

Over the past week, the media has tackled this issue, and John Oliver, on Last Week Tonight, devoted the majority of his show Sunday night to the topic. All of this has made me think about how we teach students, specifically in the composition classroom where our goal is to get them to think critically about a topic and to engage that topic from multiple angles within an ongoing conversation. We take the time to teach students to evaluate sources and the information that an author provides. How can we do this more effectively considering the rapidly changing media landscape?

One way to do this would be to examine texts like Masur’s and even watch, with students, segments from John Oliver, Trevor Noah, or others. In fact, this semester, I have used clips from John Oliver and ETC. Show to help students understand the ways to examine and evaluate sources rather than taking them at face (or title) value. I am not saying that these exercises worked, but they at least tackle how we can help students navigate the vast amounts of information that they encounter on a daily basis.

During our section on rhetorical analysis, we watched Oliver’s segment on the opioid epidemic because a couple of students had chosen this topic for their semester ling projects and because Oliver presents employs multiple rhetorical maneuvers in his segments. Mainly, we focused on the the rhetorical appeals (ethos, pathos, and logos), examining the ways that Oliver and the sources he uses deploy them. We focused on logical fallacies, especially with the clips he showed of Trump speaking in New Hampshire, commenting on the opioid epidemic there then questioning how anyone could use heroin in such a beautiful place. We focused on organization as well, specifically looking at the way that Oliver introduces the segment by discussing heroin then moving into his main argument about the pharmaceutical opioid epidemic.

Along with all of these aspects, I showed students the ways that Oliver crafts his ethos through his use of sources. For every source, there is a reference, sometimes small, to where the information comes from. Now, this does not serve as a bibliography, but it does provide the audience with a way to track down the information for themselves if they want to explore the topic further or even challenge Oliver’s claims. On top of this, we went through how the information that Oliver pulls affects the overall argument because he chooses specific aspects that support what he wants to say about the topic.

All of this is nothing new to composition teachers, but we need to think about ways to use clips like Oliver’s in the classroom to walk students through the ways that sources work to establish their credibility and whether or not the sources present accurate information. The tools learned through an examination of videos like the one above can easily transfer to the written page if we take the time to look at a written document alongside something like Last Week Tonight.

I want to conclude this post with a brief discussion of Daveena Tauber’s “Post-Election College Paper Grading Rubric” that appeared in McSweeny’s last week. While obviously a satirical rubric. Taubder contends, “Because I can no longer claim with any credibility that reading, writing, and critical thinking are essential skills for 21st-century success, I have revised the grading rubric for your papers accordingly. Effective January 20, 2017.” Taubder taps into the problem that has reared its head even before the election, commenting on an audience’s susceptibility to non-credible information. Essentially, Taubder flips the rubric that most of us have in our own classrooms, presenting vague points, incomplete sentences, and lack of organization as the keys to an effective essay. 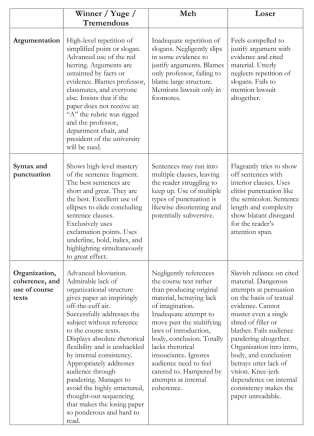 At least once a semester, I have students grade a reading based off of the rubric that I provide for the assignment. Most of the time, students come up with the same grade, or at least in the same ballpark, as me. Next semester, I am contemplating using Taubder’s rubric to see how students would grade a reading: “Winner/Yuge/Tremendous, Meh, or Loser.” This activity would call upon students to analyze a text using a different set of criteria, and hopefully it will highlight for them the importance of argumentation, organization, and syntax.

The goal would be for students to learn how think critically about sources whether they be texts or speeches. Possibly, we could even use the presidential debates from 2016 or speeches from various candidates. In this way, students would be engaging with the orality of a text in the same way that they examined John Oliver.

Masur sums this all up best at the end of his article when he writes, “The truth is, sharing illogical things begins to erode YOUR credibility and it makes you look foolish. Trust me, I speak from experience.” No one wants to “look foolish,” and sharing uninformed information does not convince anyone, who does the research, that your position is right.

What are your thoughts? As usual, let me know in the comments below.

← Why We Teach: Literature and the Presidential Election
Rebecca Harding Davis And Emerson’s Transcednentalism →