History, Sharecropping, and the Shack Up Inn

Last week, Time named Ruddy Roye (@ruddyroye) its Instagram photographer of 2016. The same week, they unveiled Donald Trump as their 2016 Person of the Year. Today, I want to briefly discuss how we can bring one of Ruddy Roye’s photographs into the classroom, specifically into the literature classroom. In an upcoming post, I will write about how we can bring  Nadav Kander’s portrait of Trump that appears on the cover of Time into the composition classroom. Today, though, I want to focus on Roye’s portrait of Robert Scott.

Last year, I wrote about teaching visual analysis in the classroom in the post “Bloomingdale’s and the Visual Analysis Essay.” There, I specifically focused on advertisements and the way that those images worked on consumers. Roye’s photographs do not push a consumer product such as clothing or fragrances. Rather, they exist to present a political message. Roland Barthes, in “The Photographic Message,” claims, “The press photograph is a message” that contains a point of emission and a point of reception and “whatever the origin and destination of the message, the photograph is not simply a product or a channel but also an object endowed with structural autonomy” (15). The photograph must be read in relation to other aspects of the “point of emission”: the caption, the overall issue of the magazine/newspaper, the full article, and other items. 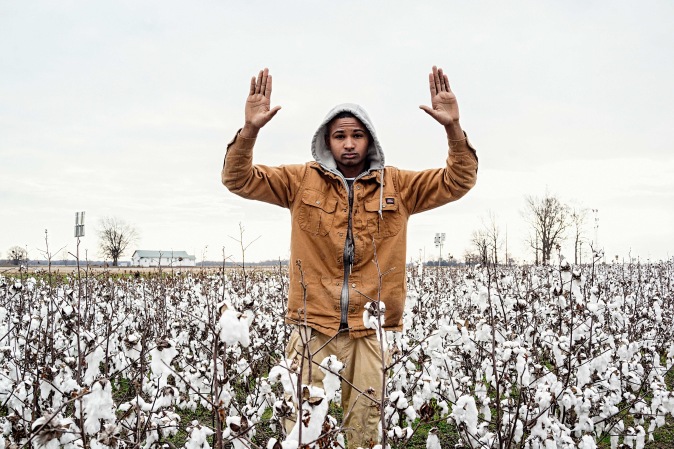 When I first saw Ruddy Roye’s photograph of Robert Scott standing in a cotton field in Mississippi with his hands up, my mind immediately went to thoughts of Alton Sterling, Trayvon Martin, Eric Garner, and to the writings of authors such as Ernest J. Gaines and Richard Wright. Aesthetically speaking, the contrasting of all of the white (cotton, building, sky, etc.) with Scott creates a stark image. This does not even include Scott’s pose which speaks volumes about our current cultural milieu.

After pondering the image, I started to read the article and learned more about the 20 year-old Robert Scott. What struck me here was not the linkage of the image to Garner and Michael Brown; rather, I paused at the short description that opens the piece and provides more information about  “[t]he 20-year-old laborer from the Shack Up Inn, a southern-style bed-and-breakfast spot with historical roots to the cotton industry.” What is the Shack Up Inn? I wondered.

It turns out that the Shack Up Inn is a “southern-style bed-and-breakfast” in a converted plantation (Hopson). The site has “authentic sharecropper shacks” for visitors to stay in during their time at the Inn. I could not find an extensive history of Hopson Plantation; instead, I only found discussions of the plantation and its role in the transformation of agriculture in the region and the South in the 1930s. The plantation did begin in 1852, and I would assume that some of the shacks are in fact slave cabins. I say this because the sharecropper cabins at River Lake Plantation, where Ernest J Gaines was born, were, in fact, former slave cabins. (An image of the remaining cabin is below.) Even if this is not the case, the fact that boarders rent former sharecropper shacks is something that needs to be examined in greater detail.

I can recall staying at “southern-style bed-and-breakfast[s]” in Mississippi and elsewhere, always vaguely aware of the pain and suffering that such sites inflicted on enslaved individuals. I did not typically think about sharecroppers, but after slavery, sharecropping arose as a new form of slavery, as Miss Jane Pittman says in Gaines’s The Autobiography of Miss Jane Pittman (1971).

What does it say about our history where we pay to stay, get married, and attend events at places like he Shack Up Inn or the numerous plantations that dot the Deep South? Attica Locke tackles this, of course, in The Cutting Season (2012). (I have written about Locke’s novel before.) As well, spaces like the Whitney Plantation seek to create a space that acknowledges the enslaved individuals’ and sharecroppers’ lives and oppression. However, we are still trying to resurrect a past that blatantly espoused racism and segregation through our continued neglect of the true history of these spaces.

This is a marker by the Mississippi Blues Commission. Like the language in Laurent’s article, have students think about the phrasing on this marker.

For instance, on the Hopson Commissary site, the history page describes the commissary in this manner: “The Hopson Plantation Commissary stands today in much the same condition as in its glory days over fifty years ago.” While the “glory days” may have benefited some, they did not benefit all. What exactly were the “glory days”? Were they the days when sharecroppers had to use script to buy what they needed to survive from the plantation/company store? Were the “glory days” when sharecroppers, mostly African Americans, had to watch what they said and did because they feared serious repercussions for even minor slip ups?

For me, I do not see much of a difference between the Shack Up Inn and places like Oak Alley Plantation. While the inn seeks to represent itself as an historical marker of Delta blues and as a must see for blues aficionados, the fact that guests stay within sharecropper cabins is akin to guests staying in slave quarters.

What does the information about the Shack Up Inn have to do with Roye’s photograph? Simply put, we need to take the information and syntax that Oliver Laurent uses to describe Robert Scott into consideration when examining the portrait. Describing the Shack Up Inn as “southern-style bed-and-breakfast” makes it sound quaint, which it may be. What that description does not do, though, is provide the audience with the true nature of Hopson Plantation and the history of oppression that allowed slavery and then segregation to exist.

I understand that the piece focuses on Roye’s photographs, and Scott’s place of employment appears kind of peripheral. However, in an article that discusses Roye’s work in regards to the ongoing cultural situation, a brief mention of the establishment’s place in history needs to be provided. This commentary would extensively add to the audience’s understanding of the present in an historical context.

Before I end this post, I want to encourage you to go and read Jesmyn Ward’s “This Was the Year that America Finally Saw the South” in relation to the image of Scott above. Ward’s essay highlights the positive representations of African Americans in the South in popular culture, but she also comments on the fact that racism and segregation still exist. She writes, “The rotten underpinnings of the South anchor the whole damn country, like the swampy bottom of the Mississippi River delta. And now we are all sinking in it.” We cannot act like we are post-racial, as the past year explicitly showed us. We cannot deny the history of the places like the Shack Up Inn, Oak Alley Plantation, and other sites that we hold in our minds with nostalgia. We must realize that the past, no matter how much we try to deny it, affects our present.

This, of course, is not all that could be said here. What are your thoughts? As usual, let me know in the comments below.

Note: I will be taking a break for the next couple of weeks. Be on the lookout for new posts starting January 3, 2017.

3 Comments on “History, Sharecropping, and the Shack Up Inn”