Last week, I wrote about Sui Sin Far and her discussion of nationality and nationhood in Leaves from the Mental Portfolio of a Eurasian. Far highlights the arbitrary nature of of the term “nation,” and rather than holding “nationality” up for honor, she lifts individuality in its place. In a similar manner, George Washington Cable, throughout his works, illuminates the social constructions of race that seeks to keep some in power and others in subjection solely on the basis of skin color and blood. One section in Cable’s early story “‘Tite Poulette” encapsulates Cable’s argument that the social construction of race exists.

Writing about ‘Tite Poulette’s lineage in “My Politics,” Cable points out that Poulette is, in fact, white, something that Zalli (a quadroon) reveals at the end of the story. Cable writes, “In ‘Tite Poulette I portrayed a white girl falsely supposed to be of Negro extraction, suffering the semi-outlawry to which quadroons and octoroons were condemned by society and the laws in Louisiana during the early years of the present century” (12). However, this position can be challenged, and after the publication of the story, a quadroon woman from New Orleans wrote to Cable calling upon him to “tell the inmost truth of it. The girl was her own daughter; but like many and many a real quadroon mother, as you surely know, Madame John perjured her own soul to win for her child a legal and honorable alliance with the love-mate and life-mate of her choice” (qtd. in Nagel 27).

The ambiguous nature of the story leads the reader to question whether Zalli is Poulette’s biological mother or whether the Spanish couple that Zalli talks about are her true parents. These ambiguities occur throughout the story in the ways that Zalli speaks about Poulette and in the “revelation” of Poulette’s parents being Spanish. This knowledge arises when the story switches to focus on Kristian Koppig while he is coming in and out of consciousness after being stabbed by de la Rue. In this manner, the actuality of what Koppig hears comes into question, and it makes the reader wonder if Koppig fabricates what he wants to believe so he can legally marry Poulette. 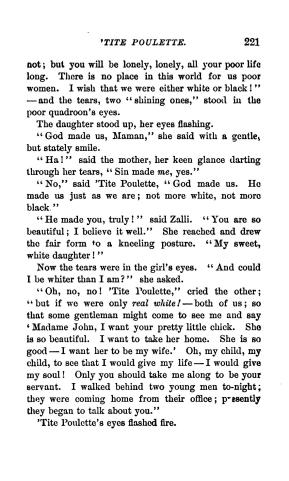 Perhaps one of the most interesting causes of the ambiguity surrounding Poulette’s lineage occurs when Zalli and the seventeen-year-old Poulette discuss her future. Here, the linguistic movements within the passage cause us to question the validity of Zalli’s “revelation” at the end of the story that Poulette is really white and can thus legally marry Koppig.

Telling Poulette that she will be lonely, Zalli says, “There is no place in this world for us poor women. I wish that we were either white or black!” (emphasis added 221). Here, Zalli places Poulette in the same category as herself, a mixed-race woman, through her use of the plural pronouns “us” and “we.” It could be argued that through her use of these pronouns Zalli speaks for quadroon women as a whole; however, taken with what follows in the conversation and narration, I would argue that Zalli places Poulette in the same legal category as herself.

Countering Poulette’s claim that God made them, Zalli tells Poulette, “Sin made me, yes” (emphasis original 221). I am not sure what to make of this yet, but I am led to believe that she could be alluding to her mother being a slave, or free person of color, and a master or man raping her, thus producing Zalli. There is not indication in the story as to this thought, but historically speaking, it would make sense. As Poulette kneels before Zalli, the older woman comments on Poulette’s beauty, even saying, “My sweet, white daughter” (221). Again, this could be an appellation of endearment because Zalli raised the orphan after her parents perished; however, it could also mean that Zalli is, in fact, Poulette’s mother.

After Poulette asks if her appearance can be any whiter than it already is, Zalli proclaims, “Oh, no, no! ‘Tite Poulette . . . but if we were only real white!–both of us” (emphasis in original 221). While phenotypically white, Zallie and Poulette are, nonetheless, legally black because of the blood that courses through their veins. Zalli’s comment, starting with “we,” again places the two women in the same category, but this placement shifts with the phrase “both of us.” In this way, Zalli hints that Poulette may actually be “real white.”

While this is not the only place that Cable uses language to create an ambiguity in regards to Poulette’s lineage, it does provide a place where readers can begin to see the disorientation that Cable creates in “‘Tite Poulette.” This disorientation, through shifting time and points of view, causes us, as readers, to question the ending of the story before we even reach it. Zalli could fabricate the papers showing Poulette as “real white,” or the papers could be authentic.

My purpose with this post is not to say that either reading is right or wrong; in fact, I ultimately think that is what makes the story work so well. It creates ambiguity to challenge the very idea of race as a biological fact and to illuminate it as a social construction. In this way, Cable argues that while we do use the term race, “caste” would be more appropriate. In his letter to his mother, Koppig writes about Poulette and feels for her because she “is one of those who the taint of caste has cursed” (222).

More could be said here, of course, but I want to leave it here. Next post, I will talk about how Kate Chopin also argues that race exists as a social construction in “Desiree’s Baby.” What are your thoughts? As usual, let me know in the comments below. As well, follow me on Twitter at @silaslapham.