After my recent post on Edgar Allan Poe’s “Hop Frog,” I did a little digging online and found two comic adaptations from Nightmare # 11 (1954) and Creepy # 11 (1966). “Hop-Frog” also appeared as a sub-plot in the 1964 adaptation of Poe’s “The Masque of the Red Death”; however, I will not be examining that issue at this time. Today, I want to take a moment to look at these adaptations and discuss how to possibly incorporate them into a class discussion of Poe’s tale of revenge. Note here is a link to the full text of “Hop Frog.”

I am not sure who adapted “Hop-Frog” for the 1954 Nightmare #11. (If you know, please let me know in the comments below.) This version contains some key differences from Poe’s original story that warrant examinations from students when reading the texts in class. For one, rather than having the king and seven councilors, the 1954 version has the king and the queen only. As well, it begins with Hop-Frog comforting Trippetta because the queen has abused her again. As such, the focus, from the outset, centers on both Hop Frog and Trippetta. While Poe’s story does this as well, Trippetta does not enter until about the eighth paragraph.

Above the panel where Hop Frog comforts Trippetta, the narrator states, “Centuries ago, Hop Frog, the dwarf, and Trippetta, a tiny but beautiful creature, were captured and taken as slaves to the court of a foreign country. Cruelly treated, they had no friends bu each other.” Poe does not use the word “slave” once in his story, but we know that Hop Frog and Trippetta are enslaved because they were taken from their homeland, by force, and presented to the king as treasures. The 1954 version’s use of “slaves” causes us to think about the underlying fears that inhabit Poe’s story of slave insurrections.

After Hop Frog and Tripetta burn the king and the queen, they escape towards their homeland. The final panel shows the couple on horses as they overlook the countryside. Hop Frog says they are headed home, and Trippetta says, “Where people are kind and decent and do not maltreat us because we are shaped differently than they!” Even in Poe’s story, we can induce that Trippetta’s sentiment is at least a part of the overall theme; however, Poe does not make this clear. Instead, the story concludes by presenting hearsay and circumstance that the pair escaped towards their homeland, “for neither was seen again.” 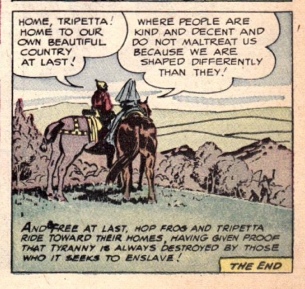 Below Hop Frog and Trippetta, the narrator ends the 1954 adaptation with these final lines: “And free at last, Hop Frog and Trippetta ride toward their homes, having given proof that tyranny is always destroyed by those who it seeks to enslave!” Key here, again, is the final word, “enslave.” As well, we need to think about the term “tyranny.” Given that this version appeared in 1954, I cannot help but think that a commentary on World War II and Nazi atrocities as well as Cold War politics under gird this last line and the story as a whole. This is something I would have to delve into more, but it is something that students could explore when looking at this version.

Archie Goodwin adapted and Reed Crandall provided the artwork for the 1966 version of “Hop-Frog.” Unlike the 1954 version, Goodwin and Crandall’s adaptation is in black and white, lending a more macabre and Gothic feel. For the most part, Goodwin and Crandall’s adaptation adheres to Poe’s story, with minor changes here and there. The most interesting aspects of this version, though, happen to be Crandall’s visual depictions of Hop Frog, Trippetta, and the other characters.

Before focusing on the visual accompaniments, I do want to note one narrative deviation that Goodwin incorporates into the comic. In Poe’s story, the narrator describes Hop Frog’s teeth as “fang-like.” Rather than describe Hop Frog as having “fang-like teeth,” Goodwin opens the adaptation with the king calling his dog, Fang, to attack Hop Frog, all for the jest of the king and his councilors. Fang pins Hop Frog to the ground and one of the councilors comments, “He doesn’t mind [the dog] . . . the dwarf’s a gay dog himself!” Here, the councilor draws a correlation between Hop Frog and the dog, making Hop Frog an animal.

Throughout the original story, Poe describes Hop Frog in animalistic terms. (I wrote about this last post.) By doing this, Hop Frog remains connected with animalistic qualities; however, Goodwin separates these connections. He does not refer to Hop Frog’s agility resembling that of “a squirrel, or a small monkey,” the “fang-like teeth,” or Hop Frog’s movements above the crowd at the party. Goodwin’s representation presents Hop Frog as human, but Poe, throughout, denies Hop Frog’s humanity through the ways he describes Hop Frog.

Regarding Crandall’s images, there are two key ones that I want to focus on. The first is a close up of Hop Frog’s face after he king throws wine on Trippetta. Here, Hop Frog glowers at the reader, his face filled with sadness and hatred. The eyes hint at sadness and pain while the mouth, with bared teeth, expresses anger. The shadowing only adds to the feelings that Crandall displays in Hop Frog’s face. Missing here, of course, are the “fang-like teeth” that Poe describes in the story.

While Goodwin’s words and Crandall’s images work to humanize Hop Frog, there is one panel that hints at the fears underlying Poe’s story. As he describes his plan for the party to the king and his councilors, Hop Frog stands in front of them, hunched over, with his hands dangling at his sides. Behind him, a shadow appears on the wall, making Hop Frog appear larger, more ominous, and actually animal like. Hop Frog and the shadow are separate, but the positioning creates the feeling that something sinister lies underneath the surface. As well, by having the king and councilors looks on, Hop Frog’s shadow could serve as a reinforcement of their feelings about the jester, claiming he is nothing more than a servant and beneath them. 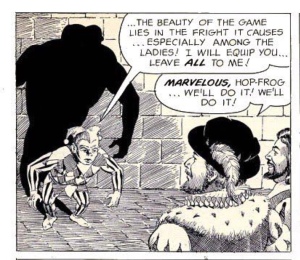 Even though Goodwin and Crandall’s adaptation does not deviate much from Poe’s original story or the 1954 version, it does provide some interesting avenues for exploration. I plan to use these two comics next semester when I teach “Hop Frog.” Right now, I am planning to have students read the story for homework then I will present the comics to them in the class. In class, I will ask them to think about the ways that both comics interpret Poe’s story and what those interpretations either add or detract from Poe’s story. As well, I will ask them to consider whether or not the comics express the same ideas and themes that Poe’s original story did. Earlier, I stated that we need to think about the 1954 version in relation to post-World War II American and the Cold War. This, of course, could be something that students could explore in more detail.

What are your thoughts?  Let me know in the comments below. Make sure to follow me on Twitter @silaslapham.

← Patriotism and Surveillance in Frank Yerby’s “Salute to the Flag”
Top Five Posts of 2017! →