Confronting the Reader in Feldstein and Wood’s “The Guilty!”

Last Thursday, I wrote about the ways that Al Feldstein and Wallace Wood countered racism in their story “Hate!” which appeared in EC Comics’ Shock SuspenStories #5. Over the next couple of posts, I want to take a look at three more stories by the duo: “Guilty!,” “Under Cover,” and “The Whipping!” I do not have enough space to thoroughly delve into each story; instead, I want to focus on the themes that run through each of them. Each story focuses on interracial relationships and the policing of bodies in those relationships. Feldstein and Woods, like they do in “Hate!,” use the stories to point out the absurdity of generational beliefs and practices that breed hate and oppression.

The stories appear between 1952 and 1954, one year before Emmett Till’s murder and amidst Jim Crow in the South. As well, they exist as part of a long line of texts that address lynching, stretching from Ida B. Wells to Jean Toomer to William Faulkner to the NACCP’s An Art Commentary on Lynching to James Baldwin and more. It is within this context that we need to think about these stories and the ways they address issues of racism embedded within the very fabric of America’s history.

“The Guilty!” appeared in the June/July 1952 issue of Shock SuspenStories. It tells the story of Aubrey Collins, a Black man arrested for the murder of a white woman. Amidst the fear of mob violence and lynching, Sheriff Dawson, who believes Collins is guilty, transfers him to another town for holding. Returning to the town for the trial, Dawson tells Collins he can run away, and when Collins tries, Dawson shoots him in the back. Dawson arrives back in town, with the dead Collins in the back seat, only to discover that Hank Barber, a white man, admitted to the murder.

“The Guilty!” begins with a panel depicting a white mob waiting for Collins to exit a police car. The mob proclaims, “We’ll take care of ‘im!” Above the panel, the narration draws the reader’s attention to the scene. Here, Feldstein highlights that this issue of mob violence and racism is a national, not a regional, problem. The point becomes abundantly clear as the narrator states, “This shameful story might have taken place anywhere within the United States! It could have happened in your town!” This moment shatters the conventional belief that instances such as the one described in the story are only relegated to the South.

Along with the displacement of space, the story does not allow Collins to speak. While he is there, in the narrative and in the panels, he only says one line as he exits the police car near the end of the story. We do not get his thoughts or his testimony; rather, we only get what the white men “believed” happened to the woman. This move recalls Faulkner’s “Dry September” where we do not see the inferiority of Will Mayes, the victim in the story. The lack of Collins’ voice is important because it denies him any agency in the situation.

Collins’ lack of agency becomes abundantly clear when the D.A. and Dawson talk about the case as Collins stands with his hands gripping the bars of his cell. The D.A. agrees with Dawson that Collins committed the crime, even though he knows that they do not have enough evidence against him. He then proceeds to tell Dawson that a lawyer from a civil liberties organization is on his way to town and that the lawyer will probably get Collins off. One panel shows Collins’ hands on the bars and the D.A. and Dawson talk outside. Dawson proclaims, “Why in blazes don’t those [lawyers] mind their own dang business! This is our party. . . not theirs!” The D.A. simply responds, “There’s a man’s life at stake! And even if we feel he did it, he’s innocent until proved guilty!” Dawson then moves to proclaiming that they should let the mob get to Collins, and the D.A. tells Dawson that if he allows the mob in he will prosecute Dawson for murder.

Collins remains silent and in his cell during the above conversation. His life is in the hands of two men who purportedly work to uphold truth and justice. The racism of Dawson is blatant is obvious, but what also arises within the conversation is the beliefs of the D.A. Even though he states that he will not allow Dawson and the mob to lynch Collins, he believes that Collins is, in fact guilty. However, he wants the legal “process” to play out. Both of these powerful men hold Collins’ life in their hands, and not matter what, they both believe he committed the crime. This, of course, mirrors stories such as Charles Chesnutt’s “The Sheriff’s Children.”

While we do not hear Collins’ voice, we do see him in various panels. In each image, Collins looks downward in a dejected and defeated manner. Bill Mason notes that Collins’ visage ultimately “has the effect of turning from a living character into a solemn, stylized effigy.” The lack of Collins’ voice adds to this transformation. Collins becomes a vehicle through which we see the hate within Dawson and the white townspeople. This placement recalls images such as Reginald Marsh’s This is Her First Lynching and Paul Cadmus’ To The Lynching from the NAACP’s An Art Commentary on Lynching. In each image, the grotesque effects of racism manifest themselves on the visages of the white perpetrators. 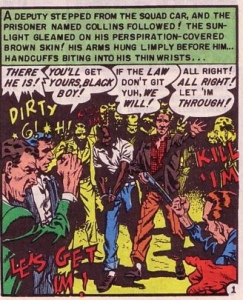 As in Cadmus’ image, Wood depicts the faces of the white mob members in “The Guilty!” as grotesque and overcome with hate. When they surround Collins on the first page, there are distinguishable faces on men screaming in the foreground as they raise their fists. In the background, behind Collins, the faces in the crowd become indistinguishable, yellow silhouettes against a black background. The panel contains words screamed by the homogeneous mass of the mob: “Dirty *G!*H!,” “Kill ‘im!,” and “Le’s get ‘im!” This layout highlights that the violence and hate is not limited to a select few in the community; rather, it has seeped into the very fabric of the community and has become indistinguishable among the citizens.

In “The Guilty!” and their other stories, Feldstein and Wood turn a mirror on their audience, causing them to come face to face with the implicit bias that inhabits their own worldviews. One panel within the story highlights this move. The panel shows a closeup of Lowell Anderson’s face. Anderson, the out-of-town lawyer, stares out of the panel towards the reader as he addresses Dawson. He tells the Sheriff that he wants to examine Hank Barker’s testimony, and Dawson tells him he has to see he D.A. Anderson looks dejected, as if he knows that even though Collins may be innocent he will not live. Reflected in Anderson’s glasses, we see images of Dawson, chomping on his cigar and defiantly responding to Anderson.  This reflection places the reader in Dawson’s position, causing the reader to see him or herself reflected in Anderson’s spectacles. Does the reader have the same thoughts as Dawson? Does the reader’s heart contain the same hate? These are the questions that Feldstein and Wood ask with “The Guilty!”

The story concludes with Anderson telling Dawson that Barker confessed and that Collins is innocent. Dawson informs Anderson that Collins attempted to escape and he had to shoot him. Dawson, of course, fabricates this story because he tells Collins to run then shoots him in the back. The final panel shows Anderson, with his hand to his chin, thinking through the situation. He concludes by thinking about Collins, “Well . . . too bad. He attempted to escape! Wonder what caused him to try?” The reader knows the answer to this question; however, Anderson’s inquiry causes the reader to ponder the story even more. Did Collins have an opportunity to escape? Did he really have a choice? Would the D.A. have convicted Collins?

Stay tuned next post for a discussion of “Under Cover” and “The Whipping!” What are your thoughts? As usual, let me know in the comments below, and make sure to follow me on Twitter at @silaslapham.

← Calling Out Racism in EC Comics’ “Shock SuspenStories”
Interracial Intimacy in Feldstein and Wood’s “Under Cover” and “The Whipping!” →

4 Comments on “Confronting the Reader in Feldstein and Wood’s “The Guilty!””