Last post, I wrote about the rhetoric of fear that William Stryker espouses in Chris Claremont and Brent Eric Anderson’s X-Men: God Loves, Man Kills (1982) graphic novel. Today, I want to expand, some, upon that discussion and look at a couple of pivotal scenes early in the graphic novel. Namely, I want to look at the opening scene that shows Stryker’s purifiers murdering two young children, and I want to focus on Danny’s comments to Kitty Pryde and their subsequent fight. These scenes set the stage for what follows in God Loves, Man Kills, and they also tie back to historical moments that we need not forget.

The opening pages of God Loves, Man Kills show Stryker’s purifiers murdering two young mutant siblings, Mark (11) and Jill (9). The purifiers corner the children at night on the playground at Westport Elementary School. The first four panels show the school and Mark and Jill as they run towards the playground. We learn, from their conversation, that something has happened to their parents, yet at this point we do not know what has occurred. The fifth panel shows Mark falling backwards as he gets shot in the back. Jill tries to help him when the purifiers walk up to the children.

Anne walks up to the Jill and the wounded Mark, and she tells the siblings that she is part of the purifiers and her intentions, at this point, should be clear. The purifiers are there to kill Mark and Jill. After Anne shoots Mark, Jill asks, “Why?” Anne kills Jill, holsters her gun, and replies to Jill’s lifeless body, “Because you have no right to live.” Anne then orders the other purifiers with her to “[h]oist their bodies up on that swing.”

The next panel shows Mark’s neck with the swing seat around his chest. On the seat, the purifiers have written, “Mutie.” The act, as the narration notes, serves as “an example for all the school children to see” when they arrive for class the next morning. However, Magneto arrives before dawn and removes the bodies from the swing set. Magneto calls the scene what it is, “An execution.”

Anne’s murder of Mark and Jill, essentially, is a lynching. Mark and Jill, while mutants, are also African American. Whites murdered innocent Black men, women, and children to maintain their power and position, and they did so, in countless cases, in public in front of crowds of thousands of people who gathered to see the murder of innocent individuals for nothing more than “that they,” as Magneto says of Mark and Jill, “had been born.”

By opening with this scene, Claremont and Anderson foreground the message within the pages of God Loves, Man Kills. As well, they draw a direct link to a past that still lingers, as Bryan Stevenson says, like a shadow over our nation. While they do not address Mark and Jill’s race, the mere fact that they are Black makes these correlations clear. Almost twenty years after the Civil Rights Acts of 1964 and 1968, Claremont and Anderson note the continued roots of racism that inhabit the nation. Thirty-six years after the graphic novel’s initial publication, those roots remain.

Even today, there is no anti-lynching legislation on the books. Back in June, Senators Kamala Harris, Cory Booker, and Tim Scott introduced a bill that would make lynching a federal crime. As Booker said, “It’s a travesty that despite repeated attempts to do so, Congress still hasn’t put anti-lynching legislation on the books. . . . This bill will right historical wrongs by acknowledging our country’s stained past and codifying into law our commitment to abolishing this shameful practice.”

We have to recall that between 1882 and 1968 legislators introduced nearly 200 anti-lynching bills, yet none got passed. We also need to recall the NAACP’s efforts and its use of visual art, along with printed editorials and stories, in its 1935 An Art Commentary on Lynching as a means to counter the epidemic. There was also Wallace Wood and Al Feldtsein’s EC comics stories that countered lynching by presenting the gory realities of the murders. The point here is that visual art–sculpture, painting, lithographs, or sequential art–make political statements.

Alex Abad-Santos, speaking with Claremont and Anderson on the 35th anniversary of God Loves, Man Kills, asked them if it is possible to keep personal politics an comics separate.  Anderson replied,

Sure, it’s possible to exclude politics from comic books, but not from art. Comics produced through avoidance of the real world are hardly satisfactory on any meaningful artistic level. Reading them might fill 15 to 30 minutes of time as a momentary distraction, but without at least a bit of sociopolitical inference, you might as well buy a superhero pinup book to flip through. Art may not be the answer to the real world’s problems, but it certainly makes dealing with them on a personal level a bit easier.

I would go further and argue that while art, no matter the medium, “makes dealing with [the world’s problems] on a personal level a bit easier” it also serves as a way to instruct and hopefully persuade the audience to change their perceptions and perspectives. This is what art does. It makes people critically think about their lives in relation to others.

Claremont and Anderson achieve this goal throughout God Loves, Man Kills. They provide a correlation to historical violence in the opening pages and they do the same thing at the start of chapter 1 during Kitty Pryde and Danny’s fight. At a dance studio, we see Pryde jumping out of a window with Danny in her arms as she yells at him to take back the comments he said about her. They scuffle on the street as Illyana and Pietro arrive to try and get Pryde off of Danny. During this, we see two panels on Pryde’s face and neck. One panel shows Danny punching her in the face.  Around her neck, she wears a Star of David necklace. (Pryde is of Jewish descent.) 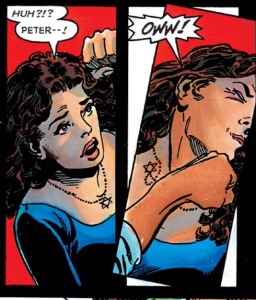 The visual cue here correlates, of course, to the Holocaust and to anti-Semitic acts in America. Again, though, there is no historical commentary on this fact. We must rely on the visual cues to inform our reading, and as we know, Stryker’s crusade can be seen in relation to the Holocaust as John Cheever says during Stryker’s speech at Madison Square Garden. Danny’s comments to Pryde had nothing to do with her Jewish ancestry. Rather, he mentioned that him and his family are part of the Stryker Crusade and that mutants should get what they deserve.

The metaphor here is clear, as it is in the rest of the graphic novel. However, we need to pay close attention to the visual cues and positioning, placing them within an historical context that buttresses the metaphor throughout. The point is that while the Holocaust comes to the forefront over the course of God Loves, Man Kills, we also need to think about other historical and contemporary forms of discrimination, specifically against people of color.

After Danny leaves, Stephanie Hunter, a Black ballet teacher, approaches Pryde and tries to calm her down. She tells Pryde to forget it and move on. Pryde responds, “How can you all be calm?! Didn’t you hear what he said?!” Hunter tells Pryde that Danny only used words, nothing more. Infuriated, Pryde approaches Hunter and screams, “Suppose he’d called me a nigger-lover Stevie?! Would you be so damn tolerant then?!!” At that, she runs away. Pryde’s question is important because it shows that words matter and they psychologically and physically affect individuals