“The Adventures of Huckleberry Finn” and Language

This semester, I am teaching Mark Twain’s The Adventures of Huckleberry Finn (1884) for the first time. I am teaching it as part of the ENG 122 survey course at the University of Bergen. While I still do not necessarily enjoy the novel (it’s kind of like Fitzgerald’s The Great Gatsby for me), I have discovered some important conversations surrounding the novel that help us address Twain’s use of language and how language functions within society. Again, I have written about this topic countless times on the blog, so I will not rehash those discussions. Rather, I will take the time to look at some of the key moments in Huckleberry Finn where Twain foregrounds language within the novel. 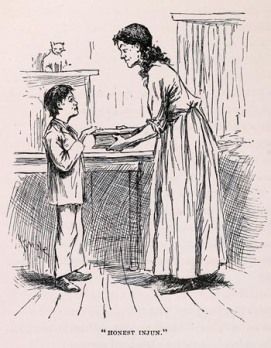 Stephen Railton’s “Jim and Mark Twain: What Do Dey Stan’ For” provides a good foundation for the discussion that will follow. Railton argues, and I would agree for the most part, that Twain, in his use of language, specifically the N-word, shows his concern for “an individual’s psychological enslavement to cultural preconceptions, epistemological prejudices.” Twain’s focus on language becomes evident when in the middle of the novel Joanna Wilks has Huck swear on a book to prove he isn’t lying. Rather than having Huck swear on the Bible, Joanna has him swear on a dictionary. Huck obliges and tells the reader, “I see it warn’t nothing but a dictionary, so I laid my hand on it and said it.”

As Railton notes, the Wilkes would have had a Bible, yet Joanna has Huck swear on a dictionary. This act relates, as well, to Tom Sawyer’s continued insistence on doing everything in life, particularly his adventures, exactly as they occur in the books that he reads. The stories he relies on, such as Don Quixote or even something like Alexander Dumas’ The Man in the Iron Mask serves a twofold purpose. On one hand, it works as Railton points out, as a “linguistic emancipation” from Europe, something that countless thinkers in the nineteenth century were concerned with. On the other hand, Tom’s reliance on the tropes contained within the novels that he reads reinforces the importance of critically thinking about the knowledge that one gains in order to counter “cultural preconceptions, epistemological prejudices.” Because of his reliance on these tropes, Tom cannot escape his “psychological enslavement,” treating Jim as nothing more than a character in his fabricated adventure story.

Along with Huck swearing on the dictionary, another important scene foregrounds not just the linguistic enslavement on individuals but also the transmission of racist thought that carries on from generation to generation. While not focusing on race like Solomon Northup’s discussions of Epps’ son, Mistress Epps, and William Ford in his narrative, Twain presents the same idea in the feud between the Grangerfords and the Shepherdsons.

Huck describes Colonel Grangerford in chapter XVIII as “a gentleman all over, and so was his family.” Grangerford, like the Miss Watson and the Phelpses, represents a system that systematically suppresses others by race and class. Each of the Grangerfords have enslaved servants that wait upon them, and the Grangerford house served as the hub for those in the surrounding areas, hosting balls and parties.

One day, Huck and Buck Grangerford see Harney Shepherdson riding in the woods, and Buck takes a shot at Harney. When they return home, Huck asks Buck what Harney did to him. Buck responds, and they carry on the exchange below.

“Him? He never done nothing to me.”
“Well then, what did you want to kill him for?”
Why nothing–only it’s on account of the feud.”
“What’s a feud?”
“Why, where was you raised? Don’t you know what a feud is?”

Buck does not know who, where, when, why, or how the feud began. In the same manner, Huck does not know, until near the end of the book, why he views Jim as inferior to himself. Huck never comes out and says these things, either privately or publicly, but we see him working through the thoughts at various points in the text, most notably when he tears up the letter he wrote to Miss Watson and says, “All right, then, I’ll GO to hell” for helping Jim escape.

Railton points out, and I think it is worth noting, that during Huck’s wrestling with his conscience in Chapter XXXI, we see the way that language works to grant Jim humanity in Huck’s eyes and ultimately the reader’s eyes. Railton notes that during the six paragraphs where Huck contemplates what to do we see “Twain’s perfectly controlled depiction of Huck’s thoughts we can hear–we can feel–the full difference between a racist label and a human being.” Twain achieves this by having Huck move from describing Jim as Miss Watson’s property (“a poor old woman’s nigger” and “that nigger’s owner”) to Jim. Huck brings Jim’s humanity to the forefront.

And got to thinking over our trip down the river, and I see Jim before me all the time: in the day and in the night-time, sometimes moonlight, sometimes storms, and we a-floating along, talking and singing, and laughing. But somehow I couldn’t seem to strike no places to harden me against him, but only the other kind.

Huck sees Jim as a friend, companion, and most importantly a human. However, even though Huck comes to the realization, he still remains stuck within the “psychological enslavement” caused by language and racist thought.

In Chapter XXXVI, as Tom and Huck work on their plan to free and already emancipated Jim, the two talk about language, specifically “picks” and case-knives.” Huck eventually says,

This scene occurs five chapters after the one previously discussed. While the use of “steal” is important here (I will write about this in the next post), the fact that Huck acts possessively here is worth paying attention to. Huck does not specify Jim, but he does specify, “What I want is my nigger.” Huck’s comment here reminds me of Candy Marshall in Ernest Gaines’ A Gathering of Old Men when she refers to Mathu and the other men in the quarters as “my people.”

Huck’s acknowledgement of Jim’s humanity in Chapter XXXI does not immediately release him from the psychological entanglements of preconceived perceptions that he has learned since birth. We do not ever know if Huck overcomes these entanglements, but I, for one, do not hold out much hope. I perceive Huck as being proud of himself for realizing that society is wrong, but I do not necessarily see Huck doing anything more after the close of the novel. That is a discussion for another day though.

Next post, I will continue this discussion by looking at a few more instances where Twain purposefully uses language to highlight the ways that we construct society and power through the words we use. Until then, what are your thoughts? As usual, let me know in the comments below, and make sure to follow me on Twitter at @silaslapham.

1 Comment on ““The Adventures of Huckleberry Finn” and Language”