A couple of years ago, I picked up Jim Demanokas, Mark Long, and Nate Powell’s The Silence of Our Friends from the local library. Immediately, Powell’s black and white illustrations caught my attention, and I moved on to the March trilogy (John Lewis, Andrew Aydin, and Powell). Again, Powell’s artwork brought emotion to the page with his moving images. I have written about some of these images before, specifically the panels depicting the Freedom Riders’ arrival in Montgomery, AL. There, I write, “In these panels, Nate Powell’s black and white artwork . . . juxtaposes and plays with our general connotations of white and black.”  This juxtaposition is what initially drew me to Powell’s work.

This past month, I finally had the chance to read two of Powell’s earlier graphic novels: Swallow Me Whole (2008) and Any Empire (2011). Each of these works deals with the struggles of adolescence and friendship in varying ways. Today, I do not necessarily want to go through each text in detail; rather, I want to take some time to write about some of my initial reactions to each of these graphic novels and some of the techniques that Powell uses in his texts to convey emotion.

I have always found Powell’s work intriguing for various reasons. One of the main features of Powell’s work that caught my attention was his use of lettering. As Brian Cronin notes, some have criticized Powell for the way he “makes it difficult to read some people’s word balloons,” yet this technique “is clearly an intentional effect to show detachment” or to me movement away from other individuals.  Along with this technique, Powell also varies up the fonts for dialogue. Some word balloons will be in script, and others will be in cursive.

Elsewhere, the lettering highlights insecurity and power dynamics within the text. A prime example of this occurs in Swallow Me Whole when Ruth goes to see Dr. Newell and Perry goes to see Dr. Connoly. In each case, the Dr.’s words are in all caps while Ruth’s and Perry’s are in lower case as they speak. Here, Powell uses the lettering to highlight the insecurity that Ruth and Perry are experiencing as adolescents being subjected to psychological and medical examination. While dealing with their insecurities during their teenage years, the step-siblings are also dealing with their personal psychological issues: obsessive compulsive disorder and schizophrenia. 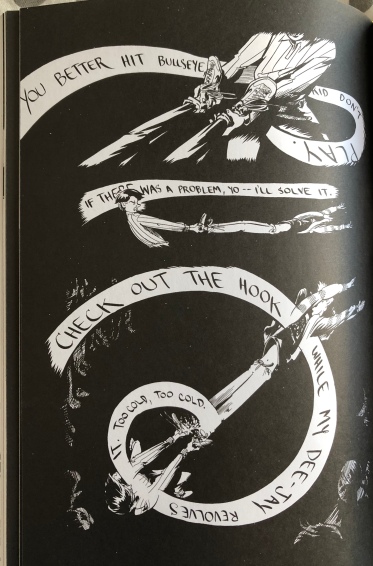 Another aspect of Powell’s work that has caught my attention is the way he weaves music and song lyrics into the panels. When Lee attends Sarah’s party in Any Empire, Powell uses Vanilla Ice’s “Ice Ice Baby” over the course of about six pages. The lyrics swirl across the page, wrapping around the action as a song would at a party. The movement intensifies when Purdy basically attacks Lee and spins him around in front of everyone. For the images where Purdy spins Lee in the air, Powell uses lyrics from Vanilla Ice’s song that create a lyrical image that corresponds to the visual image: “Check out the hook while my dee-jay revolves it.”

In Swallow Me Whole,  Powell uses the same technique a couple of times. The first is when Perry is sitting in his room with his headphones on. He sits on his bed listening to Oingo Boingo’s “Dead Man’s Party,” a song that deals with alienation and the fears that people have of showing their true selves to others. The panel with Perry on his bed follows a section where Ruth goes to her room, pulls out her specimen jars, and begins to talk with them. She asks, “how do i explain you creatures? to anyone? you know—” The next panel shows a cross section of the house with Ruth in one room and Perry in the other as Ruth’s words scroll across the bottom. She continues by asking, “THAT I CAN HEAR YOU? OR THAT YOU LISTEN WELL? THAT WE’RE SO SIMILAR?”

What this panel highlights, early in the text, is that Perry and Ruth each feel isolated and lonely. They do not know that they each have the same anxieties and that they are each struggling with the same problems. The next panel shows Perry on his bed with earphones on as lyrics from “Dead Man’s Party” move from the left of the panel and fade into his right ear. They read, “i’m walking with a dead man over my shoulder.” Perry begins to dig into the trashcan, pulls out a pencil with a wizard on it, and hears the wizard speaking to him in a similar manner that Ruth does with her “creatures.” Again, he feels isolated and alone, fearing what will happen if he tells anyone about the voices that he hears.

A few pages later, the same lyrics appear emanating from a boombox in the back of school bus as Ruth and her classmates go on a field trip. Here, the setting is different. While Perry sits in his room, alone, Ruth sits on a bus, by herself, head down, amidst fellow students. The image of isolation takes on another aspect here because instead of physically being in a solitary space she is physically in a space with others yet she is completely alone. Immediately below this panel is one that shows Ruth’s mom in the car, alone and smoking a cigarette. In these three panels, Powell highlights the fact that loneliness, isolation, and fear of being authentic can occur everywhere. One does not have to sit in a room or a car, by oneself, to be alone. The person can be alone amidst a group of people as well.

One final instance of Powell’s use of music occurs later Perry hears music emanating from the television and goes to investigate. After telling Ruth goodnight, Perry goes to his room, picks up his pencil with the wizard on it from his desk, and he throws the pencil into the trashcan. Perry has covered the wizard with a cloth. Perry then sits down at his desk and hears music coming from the living room. He gets up and walks to the television.

Initially, the words of the song are indecipherable as Perry walks down the hall. When he enters the room, the words come into focus: “when my feeble life is over, time for me will be no more.” Perry walks to the television, as his ailing grandmother sleeps in the next room. The next two panels focus on the white screen of the television as the lyrics of “Just A Closer Walk With Thee” continue to come from the speakers. In the final panel on the page, Perry walks to the kitchen as the words follow him. In fact, they appear to entangle his legs as “of toil and snares, if i falter, Lord, who cares? who who with me my burden shares” move across the page and back again.

On the next page, two panels appear. The first shows Perry in the doorway to the kitchen with the lyrics “none but thee dear Lord, none but thee” over his head as his stepmother stands at the kitchen sink smoking a cigarette. The next panel shows her, back turned, at the kitchen sink with smoke curling up to the right. With this sequence, Powell again shows the loneliness and vulnerability even when one is amongst those who care for one another. Perry does not speak with her; instead, the section ends. 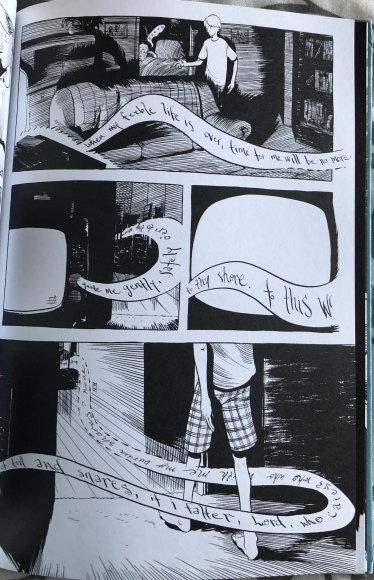 Ultimately, music is not the only technique that Powell uses to highlight these issues in Swallow Me Whole and Any Empire. However, I think they are important. He even does similar things in March when Aretha Franklin sings at President Barack Obama’s inauguration. What are your thoughts? Let me know either in the comments below or on Twitter at @silaslapham.

← Charles Chesnutt’s “Paul Marchand” and the Social Construction of Race: Part II
“The Adventures of Huckleberry Finn” and Language →