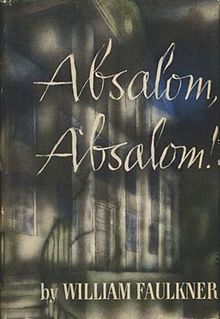 At the end of William Faulkner’s Absalom, Absalom! (1936), Quentin and Shreve construct, without knowing the “true” events, the burning of the Sutpen house. Describing “the driver and the deputy” pulling Miss Colfield out of the inflamed house, the narrator states, “he (Quentin) could see her, them; he had not been there, but he could see her” (376). The construction of that scene conflates what the two students think they know and what may have actually happened. Faulkner’s novel, along with his other works, do the same thing, confronting the past in the present and how that past gets remembered and retold. Similar scenes appear in works by authors responding to Faulkner as well, such as Jules Reynard’s discussion with Miss Jane about what happened between Tee Bob and Mary Agnes in The Autobiography of Miss Jane Pittman (1971) and the multiple points of view from different characters in William Melvin Kelley’s A Different Drummer (1962) that try to make sense of Tucker Caliban’s actions.

Today, though, I want to focus on that line from Absalom, Absalom!, a line that reverberates, in more ways than one, in Gaines’s A Lesson Before Dying (1993). Grant Wiggins begins the novel by stating, “I was not there, yet I was there” (3). Referring to Jefferson’s trial, Grant informs us that even though he was not physically present, he still knows what occurred in that courtroom because of what he heard from others but also from his own lived experience in a system that seeks to keep individuals like him and Jefferson in subjugation. He follows up this initial statement by claiming, “No, I did not go to the trial, I did not hear the verdict, because I knew all the time what it would be. Still I was there. I was there as much as anyone else was there” (3). His (non)presence does not change the fact that Grant understands the sentence that Jefferson received because it could’ve just as easily been himself in that courtroom for something else.

While this similarity between Faulkner’s and Gaines’s texts does not seem too significant, merely one author’s call-back to another, it exists on a stylistic level that needs to be examined as well. If we think about A Lesson before Dying as a whole, Grant is telling us, as readers, the past as he knows it and wants it conveyed. He is, in essence, reconstructing the events from Jefferson’s trial to his execution in the same way that Nick Carraway constructs his relationship with Jay Gatsby. Similarly, Grant’s reconstruction needs to be seen in relation to Quentin and Shreve’s attempts to construct the past as they see it. Thought about in this way, Gaines is challenging Faulkner’s formulation of the past, here and in other novels, by providingI would say, a direct commentary on how we construct the past.

Gaines does this in The Autobiography of Miss Jane Pittman, as he has said, by creating a response to Faulkner’s Dilsey.  He does this, some, in Of Love and Dust (1967), by exploring interracial romances. He does this in A Lesson before Dying, albeit less overtly. Gaines creates a novel told in retrospect, one that constructs a history while also telling a history. Grant, like most first person narrators, is not completely reliable because he has his own agenda and motives, but his retelling of the events, unlike say Sheriff Guidry or even Quentin Compson, provides a missing voice that Faulkner skirts around at some points. Unlike Quentin and Shreve who paste together the events of the past from their dorm room in Cambridge, MA, away from the time and space where there occurred, Grant resells the narrative of his own involvement in the events that he describes.

Ultimately, what differentiates Grant from Quentin and Shreve, apart from the fact that Grant went through the experiences, is  that Grant, even though he was not with Jefferson, knows what happened because he has seen it happen countless times before. The past examples of his peers and others provide him with the knowledge to construct the courtroom and the machinations that seek to keep Jefferson in a state of debasement. Removed from that space, Quentin and Shreve, like Jules Reynard, can only “speculate” on what happened, struggling with one’s knowledge of the South (Quentin) to formulate the past and to understand it.

I am, seriously, still thinking about this in relation to not only the novels discussed here but to other works by Gaines and Faulkner. These thoughts are extremely preliminary. What are your thoughts on this matter? As usual, let me know in the comments below.

← Land in Ernest J. Gaines’s “A Gathering of Old Men”
What Does the Cover Say? →