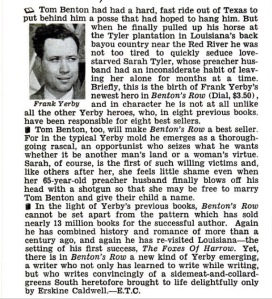 In its review (above) of Frank Yerby's Benton's Row (1954), Jet Magazine mentions the novel's early narrative arc that follows Tom Benton's arrival in the Louisiana community and his relationship with Sarah. The reviewer comments that Tom "is not at all unlike all the other Yerby heroes" and that "in the typical Yerby mold [Tom] emerges as a thoroughgoing rascal, an opportunist who seizes what he wants" when he wants it. The reviewer's words are spot on because Tom does fall into the mold of Stephen Fox from The Foxes of Harrow (1946) and the narrative, with some deviations, follows a similar pattern to Yerby's first novel. What the reviewer misses, though, is the constant undercurrent that Yerby provides. Rather than upholding "a sidemeat-and-collard-greens South" that exists in the minds of some, Yerby challenges these perceptions. I wrote about this some in the last post, and today, I want to expand on this discussion some by looking specifically at Buford and Cindy.

Buford is Sarah Benton's servant, and Cindy works for Wade and Mary Ann. When Clint Dupré, Tom Benton's son with the Cajun Lolette Dupré, arrives at his half-brother's home, Yerby introduces the reader to Buford and Cindy for the first time. When she first sees Clint, Mary Ann has lustful thoughts about him, at one point even thinking, "every time I catch a glimpse of Clint would scorch the paper if anybody tried to print [my thoughts]" (215). From the outset, Mary Ann has thoughts of an extramarital affair with Clint, just like her mother-in-law Sarah did with Tom.

Randy McGregor, Sarah's new husband, comes to Wade and Mary Ann's house in search of Burford, who has a romantic interest in Cindy. After talking with Mary Ann and Clint, he goes outside and sees the couple sitting together with Buford "holding Cindy's small brown hands in his own enormous paws, looking for all the world like a moonstruck calf" (210). Randy sees Buford and Cindy in animalistic terms, comparing Burford's hands to paws.

The animal imagery plays into stereotypes of African Americans being unable to control their natural urges, thus leading to voracious sexual appetites. When Buford and Mary Ann discuss his possible marriage to Cindy, Mary Ann agrees and warns Buford to remain chaste and not get Cindy pregnant before the marriage. As she leaves, she thinks to herself, "Fine chance he'll mind me, she thought. Niggers ain't got no self-control a'tall. Better get these two married right away. First thing I know he'll get Cindy with child and . . . " (244).  Immediately following this scene, Clint and Mary Ann have a rendezvous near the river and after having sex discuss their ongoing, secretive relationship. This juxtaposition reverses the stereotype, making the white Mary Ann, not the black Cindy, the licentious character who cannot control herself.

Immediately after talking about Wade's involvement with the Knights of Camellia, we see Wade and another member, Floyd Nolan riding up to Broad Acres. Upon coming to the house, Wade sees "Buford's wife, Cindy, sitting under a shade tree, reading a story to their four-year-old son [Fred Douglass]" (259). Wade stops and Cindy says she will go in to get Randy, but Wade tells her to wait and to keep reading so he can hear her read. She reads for him, and he discovers that Buford can read as well. This knowledge scares Wade, whose father Tom only read the Bible if anything at all. Buford and Cindy learn how to read at Clint Dupré's school, and this, along with his suspicions of the relationship between Clint and Mary Ann, adds to Wade's hatred of his brother-in-law.

What we see when Wade enters the yard is a family unit, even though Buford does not appear. We see Cindy with her son, engaging in a familial moment of intimacy, a mother reading to her son. We hear about the couple's relationship and that Buford can read better than Cindy. Placed up against Wade and Mary Ann's marriage, Buford and Cindy's stands out as the ideal because they appear to remain monogamous, look after their son, and try to better themselves through education.

The Knights of Camellia burn down the schoolhouse, and Buford and Cindy both die within the fire. Jeb, Mary Ann and Clint's son, sees the scene with Wade and Mary Ann's sons Nat and Stone. They see Buford run out of the schoolhouse on fire and die on the ground. Cindy dies in the fire because, not realizing someone else saved Fred, runs back into the school to save her son. During the terrorist act, Mary Ann and Clint engage in a sexual liaison. Clint only realizes what is occurring when he sees a glowing sky in the distance.

Again, we see Buford and Cindy maintaining a family unit, working to save each other and the schoolhouse. However, we see Mary Ann ignoring her family and having a relationship with Clint. Buford and Cindy do not appear much within the narrative, but their presence, and the positioning of their appearances with Mary Ann, works to subvert the prevailing ideas and stereotypes of the mythological Old South.At numerous points, Yerby makes his goals known both through narration and the words of Randy McGregor.

Speaking with Sarah and Mary Ann after the Civil War, Randy confronts the myth of the South and the purity of its women head-on. After listing racial attacks in various parishes, he tells the ladies,

And this, ladies, in one year, in one State, in defense of your sacred honor. How do you like possessing an honor of such magnitude, of such shining purity; yet, by definition, of such manifest feebleness that it requires rivers of blood to uphold it? Dear God! We left you alone, on outlying farms, surrounded by young and lusty Negro men for four years–and I have yet to learn of one authentic case of rape in all that time. But now it becomes the issue; we must have a stalking horse. (198) 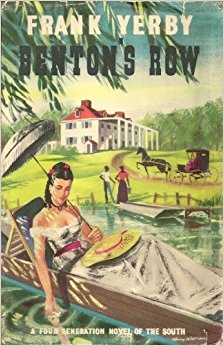 In his speech, Randy counters the myth of white Southern women as pure maidens and African American men as the defilers of that purity. Instead, we see the white men and women with voracious sexual appetites that must be quenched in any manner possible. Plus, we see characters like Buford and Cindy as direct counters to these characters in the ways that they show a complete family structure and monogamous marriage. Yerby inverts stereotypes throughout his work, sometimes overtly, but, more often than not, underneath the surface of the main narrative.

There is a lot more that needs to be discussed, and I am contemplating other aspects that need to be explored in the novel.  Until then, what are your thoughts?  Let me know in the comments below or on Twitter: @silaslapham.

← Frank Yerby and the Myth of Valor
Preaching in the Wilderness: John Marrant and John the Baptist →