Over the past few weeks, I have been working my way through Christopher Priest’s Black Panther (1998-2003). There are numerous aspects of Priest’s run that could, and should, be discussed; however, I want to focus on one aspect that I have been looking at in other works as well, the narrative point-of-view (pov). For Black Panther, Priest chose to convey the story from the pov from the perspective of Everett K. Ross, Special Attaché for the Office of the Chief of Protocol. Ross is white, and as such, he views the actions of T’Challa and other Wakandans from a specific pov. Today, I want to briefly explore the use of Ross as narrator in Black Panther.

In 2015, Priest spoke to Zack Smith at Newsaramaabout his run at the helm of Black Panther. During the interview, Priest speaks about how he wanted to bring aspects of Stan Lee’s incarnation of T’Challa into his run. Specifically, he wanted to highlight the fact that T’Challa is a cunning and mysterious character, and above all, a king. All of this comes from his very first appearance in the Marvel universe in Fantastic Four #52-#53 where T’Challa outsmarts Reed Richards and defeats the Thing. Along with these characteristics, Priest also told Joe Quesada and Jimmy Palmiotti that he wanted the narrator to be white:

Lastly, I told them we needed a point of view character: someone who could validate the fears and presumptions of white superhero fans who’d surely be reluctant to buy a “black” book.

I had sometime before created this character, an attaché (i.e. diplomatic flunky/babysitter) over Ka-Zar and had modeled him roughly after Michael J. Fox and Matthew Perry. I thought somebody like that might make a great point of view character for Panther.

How does Ross’ pov affect us as readers? Does it show us the inner workings of the white psyche in regards to race? There are moments where Ross’ thoughts move into stereotypical characterization of T’Challa and his Wakandan entourage and there is even a subplot where he discovers his girlfriend and boss Nikki Adams once dated T’Challa. For me, the positioning of Ross as narrator works in the same way that white narrators work in texts like William Melvin Kelley’s A Different Drummer, T. Geronimo Johnson’s Welcome to Braggsville, Sherley Anne Williams’ Dessa Rose, and countless other novels, short stories, and plays. I think it is within this broader context that we should consider Ross as the narrator of Priest’s Black Panther.

I can’t talk about every aspect of situating Ross as the narrator in this post, so I will expand upon a couple of instances throughout the run to analyze in a little more detail. To begin with, we must look at the first page of the first issue. Here, we see Ross cowering on a toilet, sans his pants, with a gun pointed outward towards the reader. Above his head, we read the words of an unknown person off page talk about Wakanda’s history. It turns out this is Zuri, T’Challa’s attendant. On the right of the page, we see Ross’ narration which provides some backstory and lets us see into the mind. He tells us about a large rat, Buster. He tells us how the “CLIENT” just leaped out the window with his entourage. He introduces himself as the “Emperor of Useless White Boys” who must “fend for himself among the indigenous tribes of the Leslie N. Hill Housing Project” in New York. With this sentence, Ross creates positions for the characters we are about to see in the forthcoming pages.

Even if he is being sarcastic, Ross’ use of “emperor” followed by describing the occupants who live in the housing project as “indigenous tribes” places himself in a position of superiority. The use of “indigenous tribes” as a descriptor of those who live in Leslie N. Hill sets them up as others when compared to Ross. They become “less than civilized” and related to people that must be in need of some sort of civilizing agent. Ross, as a representative of the government, comes across as this agent even if he does self describe himself as “useless.” We see the Ross’ naivety here and his blindness to the ways that he positions himself in relation to others. This thought process carries over to the way he refers to T’Challa as well, simply, and repeatedly, as the “Client.” In referring to T’Challa, a king, in this manner, Ross strips T’Challa of his position as royalty and places him in the role of nothing more than a job.

Ross then proceeds to describe the words above his head, telling us that Zuri has been describing how T’Challa’s father, T’Chaka, “ran the evil white devils from their ancient homeland.” Here, we have another reversal in position. Rather than Ross being at the top, his whiteness becomes linked to colonial and white invaders who attempted to overtake Wakanda and deplete the nation of its resources. Zuri, T’Challa, and Wakanda, rather than being an “indigenous tribe,” become the civilized culture. This changing of positions is nothing new as I have shown when I have written about authors such as David Walker and William Apess.

After a page where the same words repeat, with different images, we flash to the present and see Nikki speaking with Ross about what happened to him, T’Challa, and the others. The first words Nikki says are, “The Devil.” Within the context of the overall narrative, we learn that the Devil is actually Mephisto, but we do not get this information till the end of the first issue. When Nikki asks Ross if he is being serious about the Devil, the connotations lead us to think that the reference may be to T’Challa because in the previous inner monologue, Ross talks about Zuri relating how “T’Chaka ran the evil white devils” out of Wakanda. We are still getting situated within this world, and the moving back and forth in time, along with Ross’ pov, creates uneasiness within us as readers and brings to the forefront possible preconceived notions about identity and race that readers may carry with them into the text.

Along with these opening three pages, it is important to think about the “Pulp Fictionesque” type of storytelling going on within Black Panther. References to Quentin Tarantino’s 1994 film pop up in the first issue. The opening page immediately made me think about Vincent Vega getting shot as he comes out the restroom and the scene where a man comes out of the bathroom and unloads on Vincent and Jules. Priest talks about Quesada and Palmiotti liking “the ‘Pulp Fiction In Rewind’ narrative approach I was using in Quantum & Woody and thought it would work really well for Black Panther.”

I cannot help but think, though, that there is more going on here than just using the narrative technique of Pulp Fiction to tell the story in Black Panther. I say this because critics have commented on Tarantino’s depictions of black characters and approaches to topics of race since Pulp Fiction. There were discussions surrounding Django Unchainedand The Hateful Eight.  Priest’s Black Panther run started in 1998, one year after Jackie Brown debuted in theaters, a film that Spike Lee commented on for its use of the N-word 38 times.

In Black Panther, we see Priest entering this conversation through his use of headings, “Everett K. Ross, Superfly” and “Paging Mr. Tarantino.” The first heading indirectly points to Tarantino through Superfly, a Blaxploitation film from 1972. Tarantino has constantly made it known that he was influenced by Blaxploitation movies. The second heading references Tarantio directly, making us, as readers, consider Black Panther as a commentary on the director and his use of Blaxploitation tropes in his films.

These headings lead us to “Everett K. Ross and the Gang” where we see Ross in his two-seater car on the way to the airport to pick up T’Challa. The song he is listening to, Kool and the Gang’s “Jungle Boogie,” plays underneath the credits at the start of Pulp Fiction. Ross drives to the airport, playing a song from Pulp Fiction, a film directed by Tarantino who critics argue appropriates black culture for his films for white audiences, and when he arrives, he realizes he does not have enough room for everyone that has accompanied T’Challa to America. He expects T’Challa to have a toothbrush and a carry-on bag, not an entire entourage that will never fit in his car. 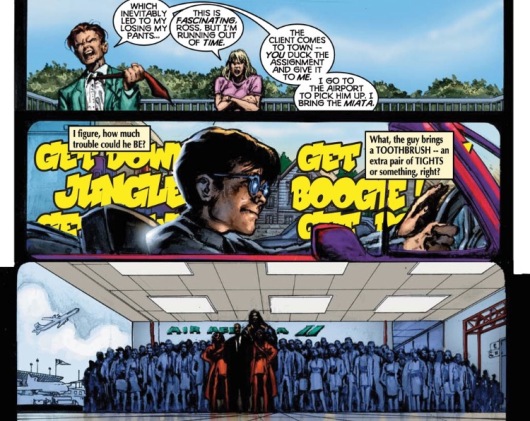 Priest’s allusions to Tarantino are important. Writing about Django Unchained, Johannes Fherle discusses Tarantino’s “apolitical,” yet shifting, stance in regards to his films. Commenting on Tarantino’s shifting responses to his use of the N-word in his work, Fherle argues that Tarantino’s responses display “what seems like a striking naivete. . . about how any work of art of fiction engages with ideology, regardless of whether he sees himself as political or not.” Blaxploitation films carried political messages, and those messages get whitewashed, if you will, through Tarantino’s lens. Fherle talks about Tarantino’s obscuring of his specific influences in his work, which essentially marginalizes the original. We see Ross partaking in this practice in Black Panther. He takes on a Tarantinoesque persona is his narrative structure, headings, music, and actions. He whitewashes the antecedent.

Priest states, “I figured, and I believe rightly, that for Black Panther to succeed, it needed a white male at the center, and that white male had to give voice to the audience’s misgivings or apprehensions or assumptions about this character and this book.” Priest imbues Ross, from issue one, with images about Black culture that he derived from popular culture, a culture that became filtered through whiteness in the form of Tarantino and others. I do not know what to totally make of this yet, but I find it interesting.

Stay tuned next Tuesday for part two of my discussion of Everett K. Ross, the “Emperor of Useless White Boys.” What are your thoughts? As usual, let me know in the comments below, and make sure to follow me on Twitter at @silaslapham.