The Black Panther and Racial Profiling in Jungle Action #20

In preparation for the February 2018 premier of the Black Panther film, I started to delve into Don McGregor’s incarnation of Black Panther in the revived Jungle Action series from 1972-1976. The reemergence of the series, and the foregrounding of T’Challa took place in correlation with Marvel’s launching of Luke Cage, a series that looked to capitalize on the rise of Blaxploitation films during the period. (I’ve written about part of this on the AAIHS’s blog.) While the first few issues of Steve Englehart’s Luke Cage eschewed directly confronting racism and subjugation in the urban environment, McGregor’s Black Panther directly confronts these issues in Georgia in the “Panther vs. The Klan” story arc that occurred in Jungle Action #19-#24 and #24. Over the next couple of posts, I want to look at issues #20-#22 and examine the ways that McGregor attacks racial profiling, the myth of equality in America, and the construction of the past within the context of the present.

McGregor, in the Black Panther: Marvel Masterworks Vol. 1, talks about the cultural milieu that lead to the creation of Luke Cage and the resurgence of T’Challa as the Black Panther. What strikes me about McGregor’s discussion of his time at the helm of the Black Panther story arcs is how his comments differ from those of Englehart and his time with Luke Cage. McGregor points out that he fought for Jungle Action to contain an all African cast of characters since the first story arc, “Panther’s Rage,” takes place in Wakanda. He also talks about how he incorporated homosexual characters into the series, Taku and Venomm, but, as McGregor says, “I could not bring these characters out of the closet at the time.” On the “Panther vs. The Klan” arc, McGregor notes that it started during “America’s bi-centennial, and I would joke that it was my birthday gift.” McGregor makes it a point to explain that his work has a political tilt, and that aspect becomes very obvious when he tackles lingering issues that affect our country and world in issues #19-#24.

“Panther vs. The Klan” centers around T’Challa coming to Georgia with Monica Lynn. While there, they encounter the Klan and the Soldiers of the Dragon while trying to determine the true events that led to her sister Angela’s death. Was it suicide? Or, was it murder? After introducing the arc in Jungle Action #19 when T’Challa fights with the Soldiers at the cemeteray and the Klan at the Lynnes’ house, issue #20, “They Told Me A Myth I Wanted to Believe” opens with T’Challa, in full Black Panther costume, shopping with Monica as two Klan members stalk them around the store.

The Klan stalking T’Challa and Monica is not necessarily what I want to focus on here. Instead, I want to examine how the issue actually confronts racial profiling through the ways that the other customers in the store, all white, view T’Challa. When Monica points out that T’Challa appears to attract attention from the other customers because of his costume, he comments on the way that those customers view him: “They do not mask their curiosity until I turn to look at them—-and then they avert their gaze busily eyeing everything but me with an embarrassed shame not quite hidden in their eyes!” (emphasis in original) Monica responds by telling T’Challa that they stared because he is either “a celebrity or a side-show freak“; however, T’Challa offers a third option, “a threat” because he “wouldn’t imagine many of them are aware that a black panther really exists. Wakanda is far from the realm of their concerns.”

The above conversation takes place within one panel, and within that panel, McGregor confronts white readers through the ways that T’Challa feels when the white customers view him. There are two items at work here that we need to take into consideration. The first is the mask. Why would T’Challa, in Georgia, wear the Black Panther costume to the grocery store with Monica? This is what sparks the conversation initially, but T’Challa turns it around and claims that those who gaze upon him “do not mask” their thoughts until he faces them. This imagery must be considered in relation to W.E.B Du Bois’ “Double Consciousness” and Paul Laurence Dunbar’s “We Wear the Mask.” T’Challa, in the costume, does not represent his true self; instead, he represents the superhero Black Panther, a masked individual.

Along with this, we also need to pay close attention to T’Challa’s claim that those who see him in the store appear to view him as “a threat.” T’Challa, essentially, notes that the white customers and the store’s staff are profiling him, keeping him under surveillance to make sure he does not do anything to harm them or the store itself. T’Challa then alludes to them not viewing him as a person but as a non-entity, invisible to themselves because the space that he, and I would argue Monica, inhabits “is far from the realm of their concerns.” Again, we need to consider literary antecedents to this assertion, looking back, of course to Ralph Ellison’s Invisible Man. We can also look to James Baldwin’s “Notes of A Native Son” and to other works as well.

Another aspect of this panel that we need to consider involves T’Challa’s pose. Unlike other panels, he appears to be either cringing or menacing. He’s somewhere in between with his crouched shoulders and right arm just underneath his chin. What does this ambiguity say? Does he appear as the threat that the customers possibly view him as? Is he the one that is scared and apprehensive? It’s an odd pose for this panel, and I do not totally know what to make of it at this point.

Unlike Monica, who has been to Wakanda, the white woman Rebecca Winthrop, who eyes T’Challa, has never left the small Georgia town. As goods fall off the shelf at Rebecca’s head, T’Challa saves the older woman from being injured. After the two Klan members attack Monica and T’Challa fights them off, the police enter the scene and a mob begins to cheer on the officers as they attack T’Challa. Rebecca, the woman T’Challa helped, looks on and hits him in the head with a cat food can. She tells him, “I knew you was up to no good when you come leapin’ at me. Scare a body half-to-death.” Even though T’Challa saved her from injury, Rebecca still views him as a threat to her own safety and well-being. As a policeman pistol whips T’Challa to the ground, the narration comments on the scar he receives from the can of cat food: “The scar may be slight, hardly noticeable, but he will carry it for the rest of his life.” 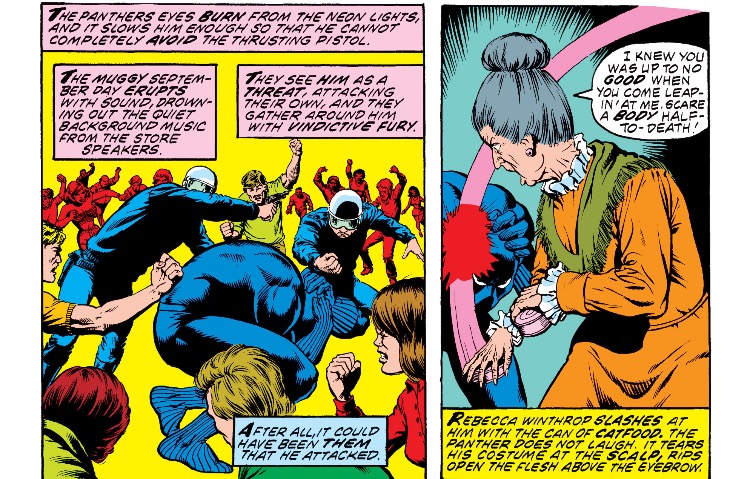 Over the course of the events in the grocery store, from the gazes to the fight, the scar is much more than a physical reminder of the altercation. It serves as a metaphorical reminder of the ways that the white customers continually gazed up T’Challa and Monica as they shopped for groceries. Couched within the overall fight in the aisles, McGregor subtly comments, in 1976, on the surveillance of black bodies in public spaces through his depiction of Monica and T’Challa in the store. The scene could’ve taken place elsewhere, but having it in a public space like the grocery store heightens the attention we should pay to the ways that others view and treat T’Challa, even when he tries to save them and protect the from harm.

Perhaps the entire scene is best summed up in two panels. In one panel, Rebecca tells Monica, “Don’t take it out on all of us, Ma’am. It’s not exactly all our faults,” implying that she did nothing wrong even though she gazes upon T’Challa as a threat to her safety. As they leave, T’Challa notes that Monica appears madder than him, and she responds that she did not like the community reacted, especially since T’Challa was not the threat. Monica, without saying it, comments that the customers and police treated her and T’Challa in the way that they did because they viewed the couple as other, and as “a threat.” 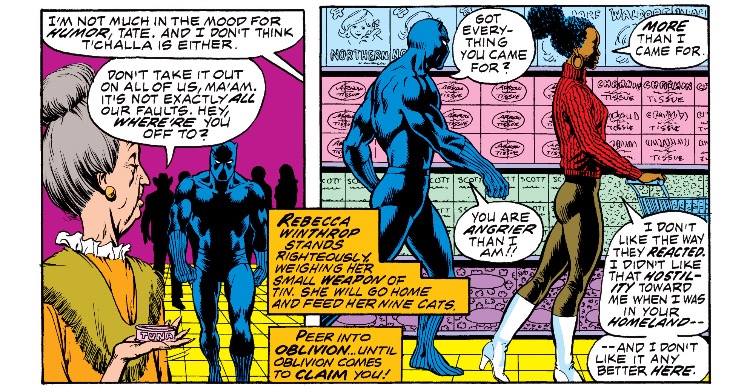 Stayed tuned Thursday where I will discuss more of the myth of American equality in “The Panther vs. The Klan” story arc. What are your thoughts?  Let me know in the comments below or on Twitter: @silaslapham.