Representation and The Black Panther as Teacher

A couple of weeks ago, I wrote about Monica Lynne’s first appearance in Avengers #73. During their first encounter, Monica Lynne causes T’Challa to see his role not just as an Avenger but as a social activist as well. Along those lines, the issues that follow, specifically Avengers #77 and #78 illuminate what T’Challa’s and Monica’s roles in the community end up being. T’Challa, as Lucas Charles, becomes a teacher, and Monica becomes a social worker.  Today, I want to expand upon these aspects of T’Challa’s and Monica’s lives in relation to other topics I have been covering in regard to Black Panther over the course of the past few months.

As the Avengers work to foil Cornelius Van Lunt’s “legal” real estate dealings, T’Challa says that he cannot take part in the case because he has “just taken a job . . . as a teacher!” None of the Avengers knew of T’Challa’s decision, and when Tony Stark asks him if he is “really qualified to be a teacher . . . here in America,” T’Challa simply tells him that he is, but not as the “king of all the Wakandans” but as an ordinary citizen, Lucas Charles. T’Challa’s education in America prepared him for the job of teaching students in Harlem.

T’Challa notes that by coming to America first as an Avenger, he relinquished his right to the Panther Throne. As an Avenger, he came to “help mankind,” and that altruistic mission led him to become something he deems more important than a superhero, a teacher. His role as a teacher allows him to provide leadership and become a role model for the students he instructs, and later in Avengers #77 we see his interaction with students in the classroom as he teaches them about Africa and its history. 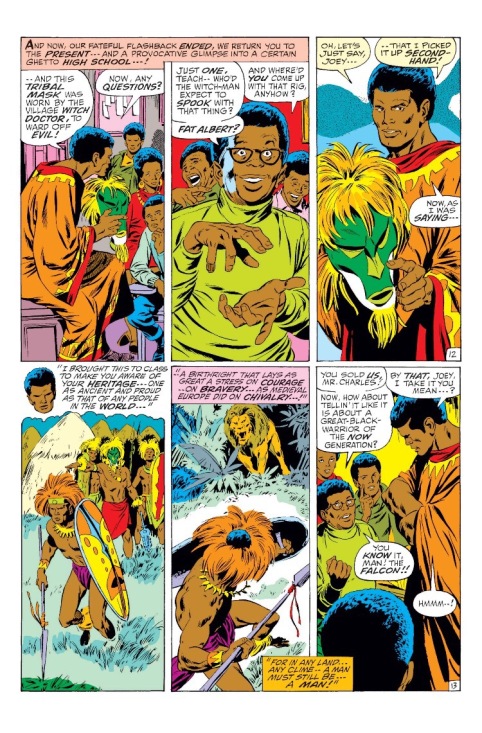 To a certain extent, the framing of T’Challa’s talk reeks of exoticism in a similar manner that Ben Grim’s comments on T’Challa do in his first appearances in Fantastic Four #52 and #53. (I plan to cover these issues sometime soon.) While that aspect appears here, it is important to note the context within which T’Challa’s role as a teacher takes place. Appearing in October 1970, the issue coincides with the emergence of Black studies departments within universities and the Black Power movement.

T’Challa’s role as Mr. Charles causes him to realize that even while he fights super villains and evil masterminds as Black Panther, the community needs something more tangible and relevant to their everyday existence. In Avengers #80, the Avengers become split pursuing different crimes and plots around the nation. One involves Red Wolf (a character that also needs more examination). Rather than traipsing the globe to defeat evil, T’Challa tells his fellow Avengers, “There are battles closer to home just as vital . . . battles that must be fought and won!” Tony asks what those battles might be, and T’Challa tells him, “I’m talking about organized crime, Avenger! No gaudy masks–no colorful costumes–just a creeping insidious evil–which corrupts everything it touches!”

At this moment, as David Taft Terry notes, T’Challa becomes “struck by the irony [of] being a superhero in a community much more in need of a crime fighter–basic law enforcement, and protection from more than hoodlums.” T’Challa’s previous encounter with Monica Lynne where the police do not do anything to initially help her works as part of this process in T’Challa’s comments. He sees, what the other Avengers do not see, that Monica, himself, and others get treated as less than equals because of the color of their skin. T’Challa finishes his comments by telling those gathered around him that the “insidious evil” is “waging battles every day for the minds–the bodies–the very souls of kids like the ones I teach–and it must not win!”

T’Challa follows this decision to serve the community through his role in the classroom but also through his role as a crime fighter in Harlem and New York. In Daredevil #69, he works with Matt Murdock to to help one of his students who has been injured by the Thunderbolts. Taking T’Challa’s presence off of the page and into the real world, he serves, along with other early Black characters such as Falcon, as a representation for readers and a symbol of possibility. He exists as a character that Black men, women, boys, and girls can identify with a relate to in some way.

This representation is important, especially for adolescents. As Beverly Daniel Tatum writes,

In [William Cross’s] first stage [pre-encounter], the Black child absorbs many of the beliefs and values of the dominant White culture, including the idea that it is better to be White. The stereotypes, omissions, and distortions that reinforce notions of White superiority are breathed in by Black children as well as White. Simply as a function of being socialized in a Eurocentric culture, some Black children may begin to value the role models, lifestyles, and images of beauty represented by the dominant group more highly than those of their own cultural group.

Without images such as T’Challa or Falcon, the standard comic book fare of the 1960s expressed nothing more than images of White characters such as Captain America, Iron Man, or others.

After T’Challa’s first appearance in Fantastic Four #52, a letter from Henry B. Clay III appeared in the letters section of Fantastic Four #56. Clay congratulated Stan Lee and Jack Kirby on the introduction of T’Challa, and Clay goes on to expound upon his enthusiasm by telling the creators, “I was joyous about your breaking all the precedents of your profession, and introducing a Negro as a hero . . . a real live Negro super-hero!!!” Clay’s comments espouse the importance of T’Challa not just within the imagined worlds of the characters that inhabit the Marvel universe but most importantly they highlight his importance to readers who now see themselves represented within that world.

Along with Clay’s comments, it’s important to consider Kirby and Lee’s response. They tell Clay that hope T’Challa will help readers understand that it is important to “base [their] opinion of a fellow human being on his basic qualities and character–not on the color of his skin, the name of his God, or the place of his birth!”Kirby and Lee see the role that T’Challa can play, and that role expands in the next sentence when they write, “Perhaps a comic mag isn’t the proper place for this type of discussion–and yet, there’s a chance that these pages, which are widely perused by thinking readers throughout the world, are possibly one of the best places of all! ‘Nuff said!”

Clay’s comments, along with Kirby and Lee’s response, point out two important aspects to consider when talking about comics and representation. For one, characters like T’Challa provide images of superheroes for Black adolescents, and others, to look up to and relate to. Two, T’Challa presents White readers with the opportunity to relate to a character who encounters different problems than they do. It calls upon them to question their values and beliefs by hopefully getting them to identify with and root for T’Challa. This aspect runs throughout various Black Panther runs, specifically with Christopher Priest’s use of Everett K. Ross as the narrator.

As a superhero, T’Challa exists far away from reality; however, his role as Lucas Charles works to bring together the two aspects mentioned above. As Lucas Charles, he brings to the forefront the movement towards Black studies of the period and the importance of knowing not just European history but African and world history as well. For White readers,  his position shows them that the Eurocentric view of history and education is not the only view and that there are other, important, items that need to be learned and explored.

Next post, I will look at Monica Lynne’s next appearance in Avengers #78. What are your thoughts? Let me know in the comments below. Make sure to follow me on Twitter @silaslapham.

← Ernest J. Gaines’ “A Gathering of Old Men” and the Social Construct of Race
Representation and Monica Lynne’s Social Activism →

4 Comments on “Representation and The Black Panther as Teacher”